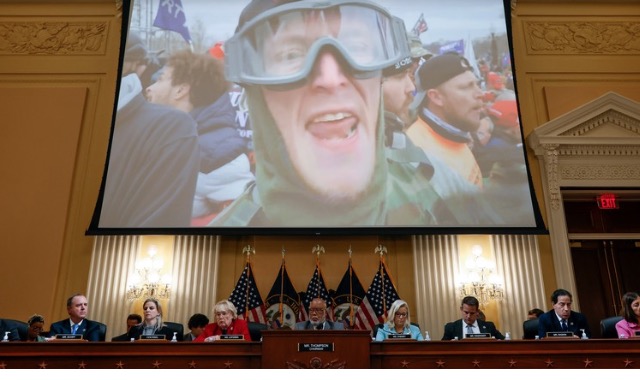 SAY WHAT? - Whoa. Things are getting pretty wild at the Jan. 6 hearings as former aides and perps of our own "American monster" crawl out from their caves to disclose just how crazed the circus got near the end of its apocalyptic run. Monday's testimony showed that Trump knew he lost but, increasingly "detached from reality," he chose to ignore his (relatively) sane minions, listen to a "definitely inebriated" Rudy Giuliani, keep up the "Big Lie" that keeps getting bigger, and, 'cause grifters gonna grift, "the big rip-off" with it. As at the first hearing, the Committee mostly and effectively used eye-popping video of the violence along with testimony by Trump's own low-lifes - Trump said Pence "deserves" to hang, the lies and delusions were "completely nuts," Kushner called warnings of violence "whining" - to drive home what was clearly a #TrumpCoupAttempt. In the wake of that realization, furious hashtags have sprung up like so many overdue subpoenas:

Just as vitally, those forced to testify under oath have exposed the active support or covert complicity of scores of Republicans in the Administration and, inevitably, in Congress. Thus do the powerful opening words of Liz Cheney, one of the century's most improbable heroes, echo through the proceedings: "I say this to my Republican colleagues who are defending the indefensible: There will come a day when Donald Trump is gone, but your dishonor will remain.”

For now, it still lingers amidst the miasma of denial and delusion that imbues the GOP. After the first hearing, they posted diversionary images of migrants at a crowded southern border - "Where's Joe Biden?" - and claims "Dems BS 1/6 hearings BOMB in the ratings!" Sniffed Oregon Rep. Cliff Bentz, "As Democrats continue with their partisan, Hollywood-produced sham of an investigation, gas prices are through the daggum roof and inflation is off the charts. They just don't care!" Hoping to nail their rep as "indescribably repulsive people," Klan Mom Marjorie Greene "interviewed" Matt Gaetz, who offered up a hot mess of psycho-babble to charge Jamie Raskin can't do his job - aka is "unable to do the Congressional experience" - due to the "dungeon of that personal trauma" that was the 2020 suicide of Raskin's remarkable son Tommy; Greene quickly nodded in fake sympathy before squawking, "Well, I believe he's a communist." Unsurprisingly, Trump's Truth Social, "free from political discrimination," freaked at the hearings; many users said they got banned when they posted about it. And Faux News famously refused to cover it, going with no-commercials agit-prop, Stalin-esque chyrons - "Jan. 6 Show Trial Is Underway" - Tucker Carlson grimacing, "They are lying, and we are not going to help them do it," and the false flag, "no evidence whatsoever" line: "There was no insurrection...There was a riot, a small one, that got a little bit out of hand." Still, the first hearing drew a hefty 20 million viewers - way above, say, the nine million who watched Trump's impeachment trial - and a defeated Fox coveredMonday's session. Online, a few stalwarts lamely argued, "All. Old. News." One response: "Doesn't. Make. It. Less. Of. A. Crime."

Monday's hearing made that brazenly clear, with testimony that Trump's advisors and other grown-ups looking at the numbers repeatedly told him he'd lost the election; that the many examples of "fraud" he kept citing - Chinese spies! George Soros! deep state! dead Hugo Chavez! - were "wild," "bullshit," "bogus," and "complete misinformation"; that it was "far too early to be making any sort of call" as ballots were still being counted; that Trump nonetheless "decided to go in a different direction," invented "out of whole cloth" the "fact" he'd won the election, and went boldly before the cameras to declaim, "This is a fraud on the American public...We were getting ready to win this election. Frankly, we did win this election." To make things more surreal, Trump fatally chose, not what staff termed "Team Normal" - ie: regular, rational fascists - but the bonkers, conspirational likes of Sydney Powell and Rudy Giuiliani, who that night was, by all reports,"definitely intoxicated," or at least drunk enough to decide fuck it we should just say we won and be done with it, which is one hell of a way to run a railroad, never mind a democracy, not that anyone expects much more from America's long-ago Mayor as he ranted about an imaginary suitcase full of ballots in Georgia. It turns out the Big Lie was also what Rep. Zoe Lofgren called "the Big Rip-Off": Trump kept scamming supporters in what was just "a marketing tactic," raising over $250 million to fight imaginary "fraud" that in slimy truth went to his PAC, his hotels, his friends, his make-up kit, Don Jr.'s girlfriend, Mark Meadows' pocket, and God knows where else in what sounds a whole lot like wire fraud, which is highly illegal. And yes, Merrick Garland says, prosecutors are watching the hearings.

Amidst the devastation, probably the single most damning evidence came from former and lest we forget long complicit A.G. William Barr, who testified Trump became "detached from reality" after the election, refusing to listen to reason, referring to himself in the third-person - "You hate Trump" - showing no "indication of interest in what the actual facts were," and making “idiotic claims” about Dominion Voting Services. “It was like playing whack-a-mole,” Barr said of all the “bogus” claims. “I told him it was crazy stuff.” Note: Too bad he didn't tell any of the rest of us. While he allegedly spoke bluntly to Trump, Barr repeated his lies for months; when he resigned in 2020, he praised the mad king and this year said he'd vote for him again, so no Cross of Lenin for him. Ditto all the sycophants who aided and abetted and stayed silent until now, when under oath they had to come clean. Today, as the grudging truth-telling begins, the rats frantically desert the sunk ship, gnawing at each other, and a truck circles D.C. with a gruesome clown dancing next to, "It's called Sedition, and it's a crime." After Barr's testimony, Trump issued a 12-page, undoubtedly cogent response - just like Jared's whining! - andlashed out at his former consigliere for being "a Marxist," maybe Harpo? It's all pretty sordid and scary, a cataclysm we may or may not have barely averted. A reminder of the crazy: After the election, rehashing the "bullshit" fraud claims even his questionable toadies dismissed, Trump gave a 46-minute speech about how Biden stole the election. In one clip, he holds up - visual aids! - a graph. He rants about an early morning "vote dump" in Michigan, when 149,000-plus votes came in. "Unexpectedly! We were winning by a lot! That batch was received in horror (or 'horrah')...What kind of system is this?!?" For once, an excellent question. Evidently, the kind that allowed a deranged narcissistic clown to almost topple the Republic. This close, we came.