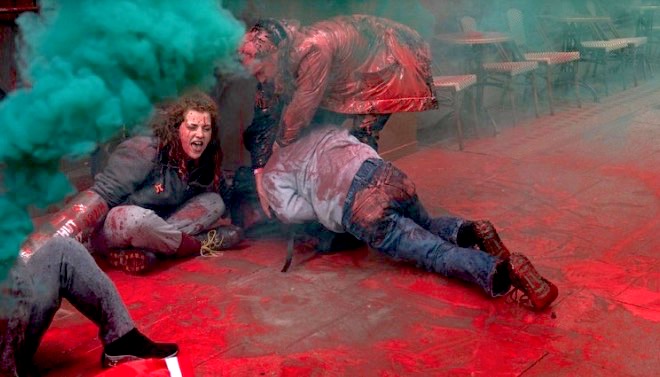 SAYWHAT?  - In a world beset by bloodshed, Israeli violence against Palestinians is little-reported but still ongoing, and grievous. Both settler attacks and home demolitions are soaring. At last weekend's annual Flag Day "celebration" marking Israel's capture of Jerusalem in the 1967 war, tens of thousands of flag-waving Israeli nationalists marched through the city's Muslim quarter harassing international media, attacking Arab business owners and chanting "Death to Arabs" and "May Your Village Burn" - this, as police who routinely assault Palestinian protesters for chants deemed “incitement” ignored them to arrest anyone flying a Palestinian flag. Meanwhile, Israeli forces last week shot and killed four Palestinians in the West Bank, at least three for no discernible reason. Journalist Ghufran Warasneh, 31, was headed to her first day of work at a local radio station when she was killed by soldiers; they claimed "an assailant armed with a knife" tried to stab a soldier, which is how journalists always start new jobs, and "our soldiers thwarted the attack with live fire to neutralize the assailant.” Video shows Warasneh on the ground as feverish Israeli soldiers fire in the air and shove away concerned bystanders. Soldiers also killed a 29-year-old standing outside his home, a Palestinian who reportedly fired at soldiers demolishing a home, and a 16-year-old walking with two friends; shot in the back, he was the 14th Palestinian child killed this year.

Protesting these and so many other atrocities of Israel's decades-long "campaign of terror and settler-colonialism," along with the U.K.'s complicity in it, four Palestine Action activists were just arrested at the London headquarters of the Israeli weapons behemoth Elbit System after they glued their arms together in cylinder tubes, blockaded the entranceway, sprayed fake blood, and set off apocalyptic-looking smoke flares, tweeting, "If this were Palestine, this smoke might well be Elbit-made tear-gas used on the Palestinian people (being) choked by the warmongers at Elbit." The group, which uses direct action and civil disobedience to pressure British companies to end involvement in Israel's apartheid regime, rejects the tradition of protesting reactively or defensively: "The Palestinians don't wait for the 'right' to protest, and neither will we." The London action by 2 men and 2 women - half Palestinian - was part of an 18-month-old campaign to #ShutElbitDown in the U.K., and the 6th hit on London in two months. Israel's largest arms company has multiple British factories making drones, bullets, tear gas; it also provides the Royal Navy with training technology for their nuclear submarine program. All told, Elbit supplies the Israeli military with a staggering 85% of its drone fleet, including the Hermes drones that ravaged Gaza; Elbit likes to boast its weapons systems are "battle-tested on Palestinians."

Elbit isn't the only arms manufacturer in Britain facilitating war crimes against Palestinians. The 8 sites of the Thales Group'sAdvanced Weapons Systems UK produce automated weapon systems, tactical air defence radar, drones, missiles that have been used in Iraq, Afghanistan and yes Palestine, recently promptng the launch of a new Palestine Action Scotland. To mark its creation, six activists stormed and occupied the Thales' Glasgow factory, halting operations and dismantling equipment. While the groups plan to coordinate some future actions, the campaign against Elbit has already seen results: In January, Palestine Action took credit for helping shut down an Elbit factory in Oldham, Manchester after repeated actions there. Elbit insistedthe move was part of a restructuring plan, but activists celebrated it as proof that, "In Britain, as in many other countries, the Israeli war machine is not welcome.” As it garners growing support among U.K. and other progressives, Palestine Action has also seen crackdowns, from violent responses by company security forces to last month's jailing of nine activists who occupied Elbit's Bristol offices. Two foreign nationals are still being held for trial on June 15; for now, they have sent the message, “The body might be incarcerated, but the soul is ever free.” After the London action, the group echoed them. "Whilst the British-backed military occupation continues," they wrote, "so do we."