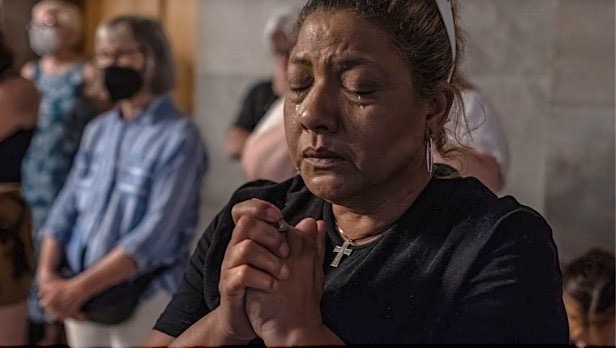 SAY WHAT? - In an excruciating, infuriating metaphor for heartless GOP inaction in the face of America's soaring gun carnage, stony-faced state  employees working at the behest of NRA-fanboy and Tennessee GOP Gov. Bill Lee unceremoniously hauled off a tribute to the Uvalde victims - cards, flowers, 19 stuffed animals - minutes after  local clergy and gun-reform advocates tearfully left it at Lee's office. The group also presented Lee with a letter signed by 49 faith leaders asking for common-sense changes to gun laws; Lee  refused to accept it, and said they should mail it to him. The action came days after Lee wrote he was "heartbroken by the horrific tragedy in Uvalde (and) the loss of innocent lives," adding, "We lift up their families in prayer and thank all the first responders who acted quickly" (sic), even though in truth they just stood around for over an hour to save their own panicked, racist asses. Last year, with great fanfare, Lee proudly signed into law a bill allowing pretty much any adult to carry a gun without a permit/ license or any training; at the time, he thanked the NRA, which applauded the bill as "a great step forward in the advancement of self-defense rights...without government red tape or delays," for "helping get this done." Note to the GOP: If you don't like being called monsters, stop acting like monsters.

In Wednesday's action, about 70 Tennesseans, including several pastors and doctors, walked to Lee's office in the Capitol for an emotional vigil to honor the victims of both the Uvalde and Buffalo massacres. Noting "thoughts and prayers don't stop bullets," they laid down 19 stuffed toys for each Texas child murdered, read the names and ages of each victim, and stood for 90 minutes, about how long the Uvalde shooter was in the school. A pastor also presented Lee with a letter asking for five actions - repeal of permitless gun carry, robust background checks, a vote on a languishing red flag law, a ban on assault weapons and high capacity cartridges - arguing the steps could help in "bringing peace to our communities." Lee rejected the letter, saying they should use Louis DeJoy's stellar post office to send it. Minutes after the group mournfully left - way faster than Uvalde cops acted - video from The Tennessee Holler shows state workers wheel in a cart and begin loading up the vigil items. They were led by a porcine thug who pointedly ignored repeated questions from an increasingly distressed reporter: "Can you tell me where these things are going? Are they going to some sort of memorial, or in the trash? The people of Tennessee want to know - Is this memorial for dead children going in the garbage?" When the cart was all loaded - topped by the heartfelt letter - they disappeared into the elevator. No time to waste: Gotta make room for the next massacre.