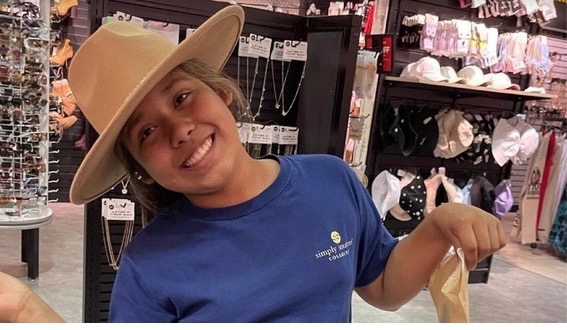 SAY WHAT? - The pitiless news cycle lurches on. Trauma fatigue sets in, and much of a weary, heartsick, willfully unheeding America - too awful, too often, we hate it here, let's watch a movie, clearly it's hopeless - moves on. But lest we forget: For the families in Ulvade planning funerals not vacations, for all the families of all the dead in all the horrors gone too soon, a cavernous hollow remains. The obituary for Alexandria Aniyah "Lexi" Rubio, 10, makes the devastation achingly real, makes Lexi, as her grieving father devoutly wishes, "not just a number." The daughter of a journalist and a deputy with the sheriff's office, Lexi was "driven, athletic, intelligent and fun." Now, the obituary declares to the mournful accompaniment of  "Somewhere Over the Rainbow," her visitation hours and prayer service will be June 10 at the mortuary; her funeral service will be June 11 at the First Baptist Church, followed by interment at Hillcrest Cemetery.

As a 4th grader, it goes on, Lexi hoped to earn a softball scholarship to St. Mary's University, where her mom Kimberly goes; she planned to major in math and become a lawyer. Like her father Felix, she played softball and basketball; he practiced with her. She was "opinionated and an impassioned debater, just like her mother," and she loved her five siblings, who called her "fierce. She liked popcorn with cheese, mint chocolate chip ice cream, pasta with Alfredo sauce, her own weird "Lexi burger," and "a little chocolate with breakfast helped start the day out right." She liked to bake cookies and talk on the phone with friends. She admired AOC, wanted to visit Australia and live where it snowed. She loved bright colors, turquoise to purple to yellow, and her family "hopes those mourning Alexandria will wear brightly colored clothing in her honor." Lexi had a large extended family; her pallbearers will be her brothers, grandfathers, uncle and cousin.

"My beautiful, smart Alexandria Aniyah Rubio was recognized today for All-A honor roll. She also received the good citizen award," wrote Kimberly on Facebook the day of Lexi's murder.  "We told her we loved her and would pick her up after school. We had no idea this was good-bye." About 30 minutes after they left, the gunman opened fire. Off-duty that day, Felix rushed to the school, stood outside in the chaos, started to inch inside: "I see where everybody's posted - in front of my baby girl's two doors...I see them open the doors and open fire...My heart drops." They drove to the civic center where distraught parents were told to await schoolbuses. Their son arrived safe; they looked for Lexi, "bus after bus," they tried the hospital, Kimberley's father drove to the San Antonio hospital where some kids were taken. Finally, they got the news.

"I don't know how to live without you, baby," wrote Kimberly a few days later. "And, honestly, I don't even want to." Still, she and Felix are tearfully speaking out against assault weapons, “and this is not because of what happened with our child - we have always had this opinion, and so did Lexi." "We live in this really small town in this red state, and everyone keeps telling us it's not the time to be political, but it is - it is," she said through tears. "Don’t let this happen to anybody else." Haunted by "'what ifs," she has no interest in the disastrous police response or "somebody else's mistakes, because I already have to live with my own...I left my baby at that school." But they refused to meet with the deeply complicit Gov. Greg Abbott. "My first thought was, 'My Lexi doesn't even like him,'" she said. "She wanted to be a lawyer, she wanted to make a difference, and I want that for her now. She still can."

No not another, not

we lay on our bellies

on the warm pavement

that one’s carrying something.