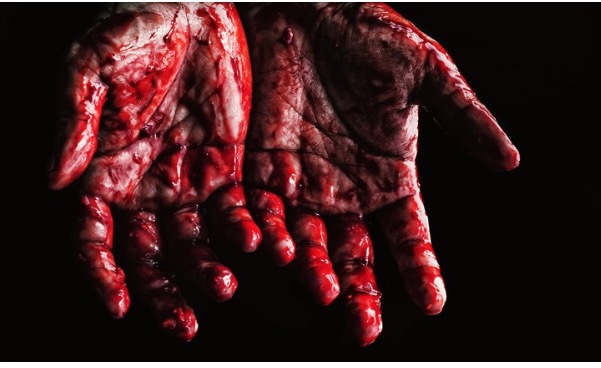 SAY WHAT? - Small bodies drop. Ghouls pray and babble. Most of us rage, weep, howl for action. In Uvalde, the families of 19 children - who all had a heartbeat so where are the alleged protectors of young lives? - had to tell police what their blessed child wore to school that day and get DNA tests to help officials identify now-unrecognizable, AR-15-ravaged corpses. In response to the slaughter of 19 children and two teachers, evil freaks and bought pols who love guns more than children blame meds, morals, not enough God, anything but the over 400 million guns adrift in a nation they now hold hostage, steeped in blood. The U.S. has 4% of the world's population, and 46% of its guns; it has more than twice the number of guns than the next most-gun-infested country, Yemen; its gun violence is soaring, with over 45,000 dead in shootings in 2020, an increase of 35%; gun violence is now the leading cause of death among young people; there have been two dozen school shootings so far this year. Since 2004, when a ten-year ban on assault weapons expired, mass shootings have tripled. Before the ban there were 400,000 AR-15s in America; today, there are 20 million. This is the country gun addicts have chosen.

Uvalde is bloody America all over again. It's also Sandy Hook, says Jessica Winter, which "came to be seen as the graveyard of gun control" after demands for background checks and assault weapons bans failed again. "If an entire classrom of dead first-graders could not spur even remedial action in Congress on gun control, nothing would," she writes. "And nothing has." Thus do willfully blind lovers of guns and their profits shake their complicit heads and insist they really don't know why all these tiny bodies keep piling up but right now we need to mourn them and not talk about the who or why of it, which remain a mystery. "No Way to Prevent This, Says Only Country Where This Regularly Happens," reads The Onion headline helpfully repeated 21 times for the 21 stories they've written that began, each time, "In the hours following a violent rampage in Colorado/California/Indiana etc in which a lone attacker killed 10/8/20 etc individuals...citizens living in the only country where this kind of mass killing routinely occurs reportedly concluded there was no way to prevent the massacre from taking place. “It’s a shame, but what can we do?"

Enter Republicans who take millions from the NRA offering astute insights on the likely cause of the bloodshed. Though the school had doubled security measures - cops, fence, surveillance - guns obviously weren't the issue. They blamed ADHD meds, too many doors, "fatherlessness," "decades of rejecting good moral values"; some presumably also blame Dr. Seuss, CRT, pronouns, Disney and gay Socialists. Human gnoll Rep. Paul Gosar blamed "a transsexual leftist illegal alien." Marjory Taylor Greene blamed non-believers: "We need to return to God." Calling on God was, in fact, the escape route of choice. Decrying the "devastating," "unimaginable," "unspeakable," "horrifying," "heartbreaking" loss of life, the entire deadly-arsenal-supporting GOP, without irony or any awareness they've become unholy parodies of themselves, said they were "lifting up the families in prayer," "sending thoughts and prayers," "holding the family in our prayers," and hoping, "May God comfort them all." Sen. Tim Scott added a salutary and no doubt deeply soothing footnote: "Psalm 34 tells us that the Lord is near to the broken-hearted." One constituent offered up the only appropriate response: "Do something other than pray or go fuck yourself."

Unsurprisingly, the most vile hypocrisy came from slimy Ted Cruz, who takes the most money from the NRA - twice that of next-up Marco Rubio - and gives them what they pay for. He and Heidi were "fervently lifting up in prayer" the victims, which probably made them feel way better, while insisting we need more guns and armed cops; he also trashed gun-control advocates "politicizing" the event "whose immediate solution is to try to restrict the constitutional rights of law-abiding citizens," which "doesn't prevent crime," except, actually, it does. (See New Zealand, the U.K. et al.) This time, Rep. Ruben Gallego (D-Az.) nobly stepped up. "Fuck you @tedcruz, you care about a fetus but you will let our children get slaughtered...You are useless." Cruz was among the Texas Nazis who Beto O'Rourke bravely interrupted at a presser as they blathered about mental health -  which they only cite post-slaughter - "how much worse it could have been" - tell it to the families - how "evil will always walk among us,” and, per Gov. Abbott, how Uvalde families "need our love." Despite a wave of vicious responses - He's "a sick asshole?" Really? - Beto said, nope, they need action, and "now is the time."

Inconceivably, Abbott will still speak Friday at the NRA's shameless annual gun orgy, also Trump and Cruz. Despite planned widespread protests, the good-guy-with-a-gun goons are still doubling down on the lunatic claims we need more firepower - "We have to harden these targets"; armed guards are a soothing sight - "You see a gun, you should (be) appreciating what they are doing for you!"; and a bigger, deadlier police force like the two dozen law enforcement agencies who turned up at in Uvalde is always the best solution, though all the cops reportedly stood outside for an incomprehensibly long, still-being-investigated 40 minutes, pissing in their pants 'cause "they could get shot" and harassing desperate parents yelling they needed to take action as, inside, small bodies kept falling. "Kindness Takes Courage," read the award-winning poster Alithia Ramirez createdfor an anti-bullying campaign by police; without them, Abbott said, things would have been much worse. Yet they didn't save Alithia and 18 of her classmates. Or Irma Garcia, one of two teachers who died trying to protect their kids; a fundraiser for her and her husband, who died of a heart attack shortly after, leaving their four children orphans, set out to raise $10,000 and is now at over $2 million.

And courage was much in evidence elsewhere. In a passionate, beseeching speech in the Senate, Sen. Chris Murphy, who saw his constituents through the horrors of Sandy Hook, pointedly askedcolleagues what their purpose is, if not to "solve a problem as existential as this?" "What are we doing?" he asked. "Why are you here?" Citing "kids living in fear every single time they step foot in a classroom," he repeated the refrain. “Why do you go through all the hassle of getting this job if your answer is that as this slaughter increases, as our kids run for their lives, we do nothing? What are we doing? Why are you here?" Such atrocities happen "only here" in the U.S., he bitterly noted. "And it is a choice. It is our choice to let it continue." Even more furiously echoing the national rage and grief was Steve Kerr, coach of the NBA's Golden State Warriors and longtime gun reform advocate whose father was killed by gunmen in Beirut in 1984. Trembling with fury, slamming his fists down, listing killing after killing, excoriating 50 GOP senators with blood on their hands who refuse to enact gun reform, he yelled, "WHEN ARE WE GOING TO DO SOMETHING?" Heroic. To those 50 who care more about power than dead children, we add: May their obscene reign end soon, and may their fucking souls rot in hell.