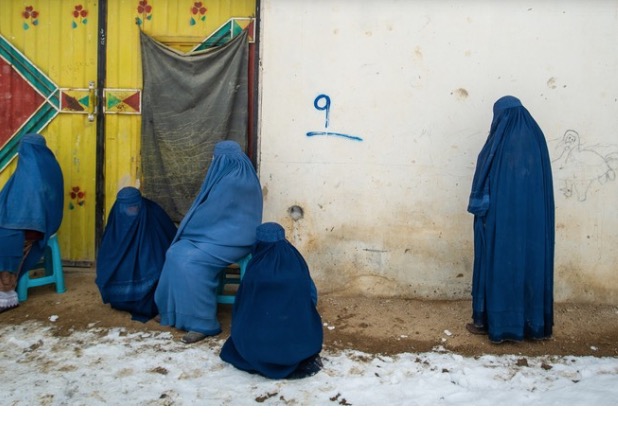 SAY WHAT? - In one of their harshest and most ominous moves since a supposedly more beneficent Taliban returned to power last August, a new edict mandates that all Afghan women cover their faces with a full burqa - swathed head-to-toe, eyes peering from a veil - if they dare to wish to leave their now-prison-like homes: "They are putting us in a cage." The decree, which marks a return to a signature policy of their dark past and a drastic escalation of strictures on women, was issued by the Taliban's hardline Ministry for the Propagation of Virtue and the Prevention of Vice - which replaced the Ministry of Women's Affairs, so what else needs to be said. The rule officially tasks male "guardians" in women's lives - brother, husband, father - with enforcing the crackdown, leading already-besieged women to feel they're "fighting on two fronts - with my family and with the Taliban." If women violate the rule, men face penalties that rise from "persuasion" by a minister's visit to a fine or trip to Taliban offices to prison time to unspecified "further punishment." Meanwhile, virtue-and-vice thugs regularly patrol streets and shops to interrogate, harass or beat women who are only covering their head with a hijab, wearing bright colors, or committing other sins of propriety. Asked why they have the right to decide how women dress or practice their religion, one official responds, "It's not us - it's God."

Before returning women to an oppressive burqa not required in other Muslim countries - "This isn't about hijab - it's about wanting to make all women disappear" - the Taliban had been assiduously working to undo two decades of progress. Under their rule, girls can't attend school after 6th grade; women can't go outside the home without a male chaperone, have lost government jobs, have had businesses closed, have seen human rights groups dissolve; activists have lost homes and passports, been kidnapped and killed, live in fear and hiding from Taliban retribution, as though "being a woman is a crime." "So much pain & grief for women of my country," writes one, "my heart is exploding." This week, in a "final and non-negotiable" decree aimed at "not just covering the face but shutting the mouth" of women in media, all female TV presenters were orderedto wear masks on air. Officials argued they "play a vital role in the propagation of virtue"; women say the world used masks to protect people from COVID, but the Taliban use masks to obscure faces of women who are "a disease." CNN's Christiane Amanpour spoke with women worried, "Even if we appear with a burqa, maybe they'll say women's voices are forbidden...We women have been taken hostage." The edicts, says one, "attempt to erase a whole gender and generation of Afghans." In protest, several female anchors posted before and after mask photos. Wrote TV host Yalda Ali, "This is me - a woman on the verge of being eliminated."