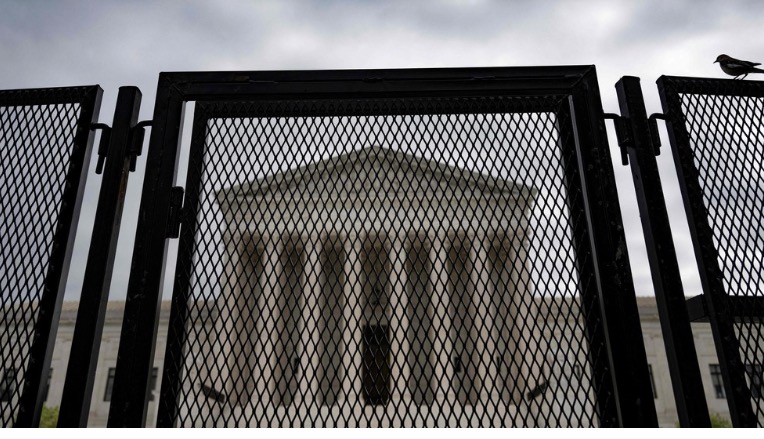 SAY WHAT? - Popular rage is still churning at the hypocrisy of illegitimate religious zealots posing as SCOTUS judges taking American women and their bodies hostage, with ongoing protests, dire warnings, emerging horror stories and recurring proof that, under oath and without shame, they all lied. At one of those historic moments when the right and wrong side of history is painfully, chillingly delineated, there are plenty holding fast to the ugly wrong, whether from frenzied hate - the New Hampshire legislator in her pink suit screaming and pointing at pro-choice protesters, "You're a murderer!...and you're a murderer!..." - or, more often, simple, careful cowardice. Thus, the reports of increased, online censoring of pro-choice narratives; the hedging of companies like the massive PR firm Zeno, which despite their past, alleged "commitment to a gender equal world" and mission to "achieve something better for humankind" is privately advising corporate clients that in a "textbook 50/50 issue" like abortion - actually 75/25 - that can spook shareholders, "being at the center is not advisable, so be judicious"; and, of course, the leaked, gutless, perfidious talking points issued by a craven GOP urging pols to just blather that, "All of us are in favor of life" and "Americans are compassionate people who want to welcome every new baby into the world." It's just the women with agency we don't want.

As peaceful protests began against the effort by five lying, unelected, crypto-fascists to return women to the Dark Ages - in a flailing ruling that both cites a spousal rape adherent from the 1600s and uses the dystopian phrase "domestic supply of infants" - the surreal response by law enforcement was to erect tall, black, metal, "non-scalable" fencing around the Supreme Court; they also added concrete barriers, activated a civil disturbance unit and “beefed up security,” because nothing says doing the right thing for the greater good and truly representing justice for and of the people like turning the rule-of-law heart of the great American experiment into an unassailable fortress. The fencing,similar to that put up after Jan. 6, is designed to repel climbing: "It puts tremendous pressure on the ends of your fingers when you try to lift your body.” In its paranoid excess, it also appears "ominous and disproportionate to what has actually been transpiring on that plaza," said Catholics For Choice. Finally, it's prompted lengthy debateabout who gets to exercise their 1st Amendment rights, and whether, in a supreme irony, SCOTUS is violating ours. Many note the hypocrisy at work: A few years ago, the Courtstruck down a law ensuring a buffer zone outside abortion clinics, arguing it restricted the free speech of zealots screaming patients are "murderers." Now, fencing will duly safeguard "the most unrepresentative body in the United States," even as it feverishly works to remove safeguards from millions of women.

The fence has sparked grim wisecracks: Will it stop documents from leaking or democracy from rising? Will Mexico pay for it? Will they build a fence around the Federalist Society to keep out SCOTUS judges? It's also seen as a dark symbol for the ascendance of a right wing famously "pro-life" only until a baby is born; then they oppose child care, welfare programs, decent education, health care for mother and child alike. The fence, they hope, will keep out the bitter, wracking, loveless, anguished reality behind their palaver about welcoming every new baby into what is often an inhospitable world beyond their imagining, or even caring. Monstrous stories on Abortion Is Health Care or #neveragain tell of it. Dr. Nivedita Lakhera asked doctors, often from their student OBGyn rotations, about their youngest pregnant patients. An 11-year-old, insides torn apart; her mother, the baby's grandmother, was 23; their priest said babies are a gift from God. A 12-year-old, self-inflicted septic abortion, didn't survive surgery. A 13-year-old who cried and clutched her stuffie through labor. A 14-year-old who drank bleach. A 12-year-old repeatedly raped by her half-brother. 10, 12, 13, 12, 10, 14, 11 years old. Incest, trafficked, congenital malformations, cried for their mommy, held a stuffed bear tight, sucked a pacifier during labor, didn't know what was happening, died after needling herself, teenager coathanger abortion, baby's father was her father, her uncle, her grandfather. An 11-year-old raped by father, delivered her sister, died of suicide five years later. A 14-year-old, raped by brother, fetus with multiple anomalies. A 12-year-old having her second child. An 8-year-old. It goes on and on. And, now, it will.

From a nightmare story in 2019: "Listen to me when I am talking to you. I am a human being, and I am more than a vessel, and I speak for my daughter whom I never heard cry....These are our bodies and our lives, and so rarely do we ask for the circumstances that command the weight of these critical decisions, but these choices are ours."