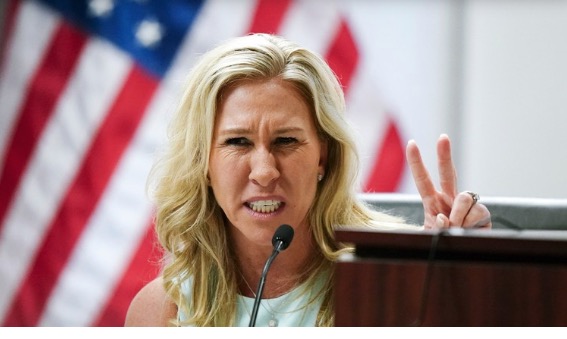 SAY WHAT? - In the latest sorry tableau exposing the dumb-and-dumber fraying of our national discourse, we just witnessed the "gloating performance art" of ever-tawdry Marjorie Taylor Greene in court, where she was trying to prove she's not too insurrectionary to be in Congress. Facing a legal challenge from a coalition called Free Speech for the People, Greene on Friday became the first purported member of Congress to publicly testify under oath about the Jan. 6 riot, which at the time she was a big fan of. Fresh from her triumphant reporting to Capitol Police of a "threat of violence" from a Will Smith gag by Jimmy Kimmel - "Officer? I'd like to report a joke" - Greene appeared in an Atlanta courtroom to fend off the group's charge that, under a post-Civil-War-era 14th Amendment barring from office anyone who's "engaged in insurrection or rebellion," she cannot run for re-election. Greene, of course, had responded to the challenge with her usual grace and reason. In a lengthy Twitter post, she ranted about "destroying democracy," "killing people's free speech," "nasty arrogant elites," "communists," "LOSERS," "slander," "a very dangerous attack on our Republic," and, seemingly without irony, "political platforms that (entertain) conspiracy theories and lies invented by one party against another."

Alas, in court she was preceded by many, many other rants on TV and the Internet, which everyone but Greene knows is forever. Needing to avoid committing perjury, she sought to escape her own inescapable past by adopting an "I'm-an-idiot-ask-anyone" defense, claiming ignorance about virtually everything she said or did in the last year-and-a-half, and smirking through an hours-long "I don't remember," "I don't recall," "I really don't know" litany so laughably transparent it sparked a MarjCannotRememberAnything hashtag. Leading up to Jan. 6, did she promote the Big Lie about election fraud, urge followers not to accept a peaceful transfer of power to Biden - "You can't allow him to become our president" - proclaim, "This is our 1776 moment," repeatedly post incendiary calls on Facebook to back Trump no matter what? Sorry, she really can't recall, and it was probably online elves - "many people" - who posted them. The most surreal moment: When attorneys asked about her 2019 claim Nancy Pelosi was "a traitor to our country" and "guilty of treason" - "It's a crime punishable by death" - for border policies "serving illegals," and oh yeah she "liked" a tweet about taking Pelosi out "with a shot to the head." No, she never said that. Deadpan lawyer to court: "Ok, put up Exhibit 5 please." Greene, squirming like Michael Palin in Monty Python's Dead Parrot skit: "Oh, no. Wait. Hold on now."

Observers were skeptical: "She seems to have very serious memory issues - she should see a doctor...This is the sort of take-charge communicator voters are looking for...My dog has a better memory than she does." So were attorneys, who argued her "who-me?" testimony "stretches credulity." In truth, even if she had any credibility to lose, it may not matter. The legal burden of proving incitement - judges have already thrown several efforts out - or even perjury makes the move to bar her unlikely to succeed. Yet the damning evidence keeps coming. On Monday, CNN revealed it has 2,319 text messages Mark Meadows, not the sharpest tool in the shed to be running interference on sedition, gave the Jan. 6 Committee before he decided to stop co-operating. It's a juicy, goofy scoop. Not only is there gibberish from Mr. Pillow - "You being a man a faith and on the front line of the decisions that are going to be historical! I would ask that you pray for wisdom and discernment from God!...the President won by millions of votes!" - but here's MTG babbling about another thing she testified she couldn't recall. People are saying, she frantically wrote, "the only way to save our Republic is for Trump to call for Marshall law." Yes: "Marshall." She added, "I don't know on those things. I just wanted you to tell him. They stole this election. (They) will destroy our country next." Speaking, albeit moronically, of...

In "The Origins of Totalitarianism," Hanna Arendt cited the autocratic  strategy of using propaganda and conspiracy to "make people believe the most fantastic statements one day," trusting that, if refuted the next day, they will "willingly embrace lies," thus destroying the notion of a shared truth vital to the rule of law. If and when that happens, asks Teri Kanefield, "Where does this leave America?" For now, still with MTG. On Twitter, she raves "we have no border" and Biden is "the king of cartels." In an interview with the far-right Church Militant - where last year fellow-gonzo, "ex-gay" Milo Yiannopoulos hawked "Adoring Virgin Statues" for $87.50 - MTG told a helpfully nodding host Americans "don't really know me" because "the media created a character of me." Yes: "character." Second cousin to "caricature," also Marshall. Clearly, nefarious conspiracy lurks. "They don't want the American people to understand that I'm actually very smart," she sneered. "They don't want anyone to like me. Because (then) my ideas and policies will be successful." Yes: "ideas" and "policies." In the Federalist Papers, James Madison praised the U.S. House of Representatives, the vaunted "People's House," for creating between lawmakers and the rest of us "that communion of interest and sympathy of sentiments (without) which government degenerates into tyranny." May it, one day, be so.