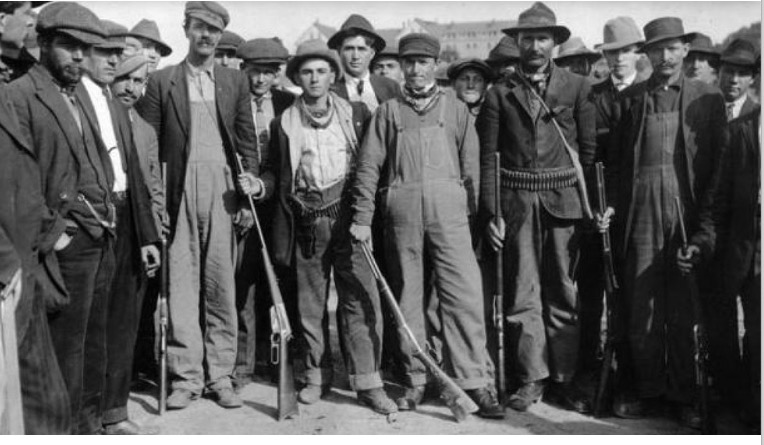 SAY WHAT? - This week marks the 108th anniversary of what Wallace Stegner called "one of the bleakest and blackest episodes of American labor history," when armed thugs hired by John Rockefeller Jr. burned down a tent encampment and machine-gunned the families of striking coal miners in Ludlow, CO, killing at least 26 - including 15 women and children who suffocated in a pit - for the crime of seeking to be treated as human beings. The attack on April 20, 1914 against 1,200 striking mineworkers was the culmination of a long struggle in Colorado coal country, where the United Mine Workers had been organizing a diverse workforce of thousands of miners, many Greek, Mexican and Italian. Most worked for the massive Colorado Fuel and Iron Co. owned by the Rockefellers, America's richest family, who despite growing public revulsion for the excesses of the Gilded Age still ran CFI like the Robber Barons they were. Miners died in the hundreds in cave-ins and from disease, working 12-hour days, seven days a week, for 80 cents per ton of coal; they got no pay for the so-called "dead work" of prepping a mine to minimize its hazards; they had to live in company shacks in company towns, shopping at company stores using company scrip, guarded by company thugs who ruled towns like concentration camp kapos.

In September 1913, after the company rejected all their demands for better working conditions, over 13,000 coal miners in southern Colorado went on strike. In swift response, CFI evicted the miners and their families from their company-owned shacks; expecting the move, the union had set up canvas tents in the nearby hills, where the miners, some armed, moved. Ludlow, north of the town of Trinidad, was the largest encampment, with about a thousand men, women and children; reflecting its majority ethnicity, it also had a Greek bakery and coffee shop. The miners continued their strike through the especially harsh 1913-1914 winter; as tensions mounted, the company hired private armed guards from the Baldwin-Felts Detective Agency who regularly raided and shot into the tent camp, often from an armored vehicle mounted with a machine gun they called the "Death Special." When the strike persisted, even as miners were felled, Colorado's governor at the behest of Rockefeller brought in the National Guard. At first, miners thought the Guard had been sent to protect them. Instead, soldiers on horseback beat and arrested them, attacked their wives marching in solidarity in Trinidad, and brought in unknowing strikebreakers under cover of night to work their jobs.

On the morning of April 20, with two National Guard companies  stationed nearby, a scuffle broke out between guards and miners. The Guard began a machine gun attack, some miners fired back, and a full-blown battle erupted. As the Guard began torching tents, terrified women and children fled into the hills; as they ran, Guard snipers cut down at least 13. Other panicked families, engulfed by smoke and gunfire, tried to hide by hastily digging pits under the tent sites. The next day, searchers going through the burned rubble of the encampment uncovered a pit with the charred bodies of four women and eleven children - the atrocity that became the Ludlow Massacre. In Trinidad, miners attended funeral services for the 26 victims. They included the Greek-American Louis Tikas, one of two leaders of the Ludlow strike - the other was John Lawson - who was lured out of camp to discuss a supposed truce before the gunfire began, and was then executed by Guardsmen. After the funerals, miners walked to a nearby building where the union had openly stacked arms for them. The strikers picked up rifles and moved into the countryside; as they went, they destroyed mines, exploded shafts, and killed guards in the start of what became a 10-day guerrilla war against those in power. Read one press account, "The hills in every direction seem suddenly to be alive with men."

The news spread quickly with other headlines like, "War In Colorado! Women and Babies Slaughtered!" The United Mine Workers issued a "Call to Arms": "Gather together for defensive purposes all arms and ammunition legally available." Hundreds of armed miners walked off their jobs to join, cutting telegraph wires as they went. Denver's Cigar Makers Union sent 500 armed men to the battle; 400 women in Denver's United Garment Workers Union volunteered as nurses to help injured strikers. There were protests across the country; thousands at the state capital demanded Guard members at Ludlow be tried for murder; pickets marched at the Rockefeller office in New York City. Still, the miners and their allies were outgunned, out-funded, out-maneuvered and politically impotent in an era when those in power viewed those who kept their world and profits smoothly running as incalculably less than. Thus did the New York Times tsk at company errors - "Somebody blundered" - that saw "the deadliest weapons of civilization in the hands of savage-minded men." Colorado's governor asked Woodrow Wilson to send in federal troops, which he did. The strike petered out. The union did not win recognition. At least 100 men, women and children - estimates range from 69 to 199 - were killed. No thug or National Guardsman was indicted.

Like the 1911 Triangle Shirtwaist Factory Fire that killed 146 workers, most immigrant women, Ludlow lives on as a symbol for wrongs long perpetrated against those still lacking basic rights who do Marge Piercy's "work of the world, as common as mud." A federal commission later savaged Rockefeller, calling his chief minion L.M. Bowers “bitter and prejudiced in the extreme," and their adherence to anti-unionism "almost grotesque in its intensity." Voices of the time bear them out. To Bowers, miners were "this vicious gang come in destroy our profit." To a federal mediator, "having nothing to do in this world but work ought to have made these men of many tongues happy and contented," with the "prosperous condition" of "a house assigned you," a public hall to use "for any purpose except to discuss politics (or) industrial conditions," and "gunmen" to remind them. To Rockefeller, "there was no Ludlow massacre," and it is "unjust in the extreme" to blame deaths on "the defenders of law and property." Still, facing widespread outrage, he embarked on a years-long propaganda campaign - murderer to philanthropist - that for years inspired other lipstick-on-a-pig efforts by sundry corporate criminals. Today, about 20,000 United Mine Workers out of a remaining 85,000 coal miners still fight for health care and other rights. In honor of Ludlow, the union built a monument and Woody Guthrie wrote a mournful song. "I said, 'God bless the Mine Workers' Union,'" he sings, "And then I hung my head and cried."