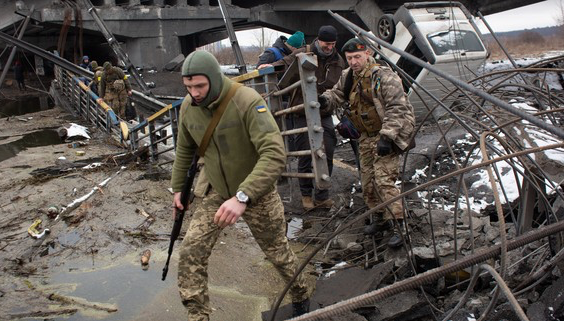 SAY WHAT? - With so much fast-moving news in Ukraine - bad, good, ambiguous - a quick update. Among Russian atrocities is ongoing heavy bombing in Kharkiv, Ukraine's second-largest city, after a Russian rocket strike on downtown's Freedom Square killed at least 11 people and wounded 35, with the death toll expected to rise. As Russia's military implausibly claimed it "takes all measures to preserve the lives and safety of civilians" by using "exclusively precision weapons (only) on military targets," President Volodymyr Zelensky got real, calling the attack "a war crime" and "frank, undisguised terror." "Nobody will forgive," he said. "Nobody will forget." On Tuesday, even as emergency workers toiled to put out over 20 fires and disable about 70 explosive devices left behind, Ukrainian forces continued fighting back. It was also revealed that Russia's Monday attack on Kyiv's TV tower hit, among apartments and other citivilian sites, the Babyn Yar Holocaust Memorial. The site marks one of the worst mass murders during the Holocaust, when nearly 34,000 Jews were killed by SS troops during two bloody days in 1941, some of an estimated 100,000 ultimately massacred there. Tweeted Zelensky, a Jew who lost many family members: "History repeating." And so much for Putin's "de-Nazifying."

There were multiple other reports of Russian attacks, including on apartments and a maternity clinic outside of Kyiv. Several people were also killed when homes in Zhytomyr in the north were hit by a cruise missile targeting a nearby air base, because Russian forces are evidently so inept they not only repeatedly kill civilians but do so using hopelessly outdated, ineffective and unprotected technology. In addition, their military strategy has apparently changed little since the Cold War; hence, reporting on the ground by CNN's Matthew Chance showed the obliteration of a Russian convoy as it advanced straight ahead into fierce Ukrainian resistance near Kyiv. Ukraine’s Air Force, along with units of the army and Territorial  Defense, also reportedly destroyed a large Russian convoy near the city of Bashtanka in Ukraine’s southern Mykolaiv region; military bloggers reported the convoy contained up to 800 vehicles. And a report in the New Voice of Ukraine, quoting a senior Ukraine official, said two elite Chechen death squads sent to kill President Zelensky had been "neutralized" after unnamed Russian security forces who "did not want to take part in this bloody war" handed over vital intel. The response from Ukraine forces: "We will not give our President or our country to anyone. This is our land."

Most dramatically, Russia's massive, 40-mile-long convoy that's been advancing for days toward Kyiv has reportedly stalled about 15 miles outside the city. Various accounts say the forces - which include many young, inexperienced soldiers who were never told where they were going - are either running out of food and fuel, surrendering without a fight before Ukrainian resistance, or "self-sabotaging" by punching holes in their own gas tanks in order to avoid combat. Some observers suggest they could simply be re-grouping; most acknowledge, despite some promising turns, the Russian assault will inevitably grow more brutal in the coming days. Still, many are deeply moved by the courage and fierce defiance of Ukrainians seen via hashtags like #GloryToUkraine, #FreeUkraine and #StandWithUkraine. People have posted photos contrasting a villainous Putin and heroic Zelensky; they're tracking the ignoble travels of Russian Oligarchs' Jets; they're celebrating Ukrainian poets who've lived and died under Russian oppression; and they're sharing moments of stunning resistance, from the "Go Fuck Yourself" message lit up outside Kyiv to the brave denizens of Melitopol blocking a convoy with their bodies. "When you attack us," warned Zelensky after Putin refused to meet with him, "you will see our faces. Not our backs, but our faces."