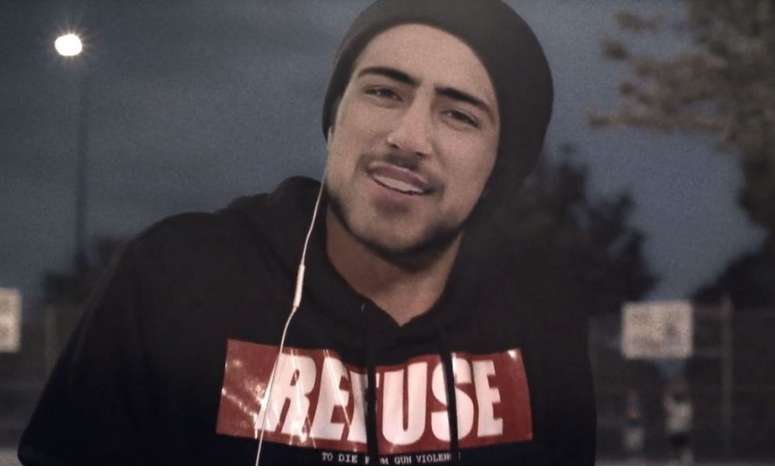 SAY WHAT? - In furious tribute to this week's anniversary of the murder of his 17-year-old son Joaquin and 16 others in one of this country's worst mass school shootings, Manuel Oliver scaleda towering construction crane across from the White House to remind its occupant that 45,000 people, still and all, had "died of gun violence on your watch." Oliver's action on Monday came exactly four years after a gunman killed 14 students and three staff, and injured 17 more, at Marjory Stoneman Douglas High in Parkland, Florida. It also came as Sandy Hook families finally won some accountability from the gunmaker who killed 20 of their children, and as the financially floundering but still-sociopathic NRA continue to fight even modest limits on their power to kill innocents - offering proof, one more infuriating time, the filibuster has to go. In 2018, in the wake of the Parkland massacre, then-Gov. Rick Scott signed a bill calling for what advocates called "baby steps" toward sensible gun reform: raising the minimum age to buy a gun from 18 to 21, imposing a three-day waiting period for the purchase, and banning bump stocks that turn standard firearms into automatic weapons, like the one the sick kid used in Parkland to mow down 17 people in six minutes. In its enduring, obscene zeal, the NRA sued to block the bill, charging that making any aspiring young mass murderer wait till he's 21 to shoot up a school violates his vital 2nd Amendment rights; legal arguments on that unholy stance begin in March.

Meanwhile, the families of young people senselessly, ceaselessly killed continue to feel the anguish of their loss daily, and most piercingly at times like this. Fred Guttenberg, who like Oliver has become a national gun reform advocate, lost his 14-year-old daughter Jamie that day in 2018 when her "voice was silenced." To mark the date, he posted a searing series of "what ifs" that "for the past 4 years, I find myself asking...every minute of every day." "Dear Jamie," he began, going on to wonder what if she'd been home sick that day, or if a shooter hadn't turned up. "What if every day now, my day still began by telling you how much I love you in person or on the phone, not telling you while sitting at your graveside?" he wrote. "What if the last thought in my head every day was not your FINAL seconds and wondering did you suffer? What if I did not have to go to bed every day hoping that you died instantly, out of fear that if you did not, that means you did suffer?"  Most bitterly, he laments that America has yet to prioritize life over profit, to understand gun violence is a primal, deadly public health issue: "What if we could all agree on a way to move America forward to being a society where we can again send our kids to school without active shooter drills or fears of being shot, or to a movie, or to a mall, or to a place of worship? What if we could all agree that we owe it to our kids to be better than this, and to change course NOW."

Manuel and Patricia Oliver, the Venezuelan parents of Joaquin, or 'Guac', have likewise steadfastly labored toward that change; says Patricia, "He left us this legacy." "I lost my son. My son did not lose his father," notes Manuel, who's  determined the "guy who wanted to change the world" be "an activist, not a victim...This is an obligation we have as parents." Along with regularly decrying the armed crazy and working with groups like Guns Down America and March for Our Lives, they started the non-profit Change the Ref, which fosters "nonviolent creative confrontation" to lay bare the grisly effects and lifelong grief of victims' families, expose and reduce the influence of the NRA, and "empower our future leaders." Its ultimate goal: "To give the young generation of survivors and victims a disrupting voice to help lead the way to change - a more peaceful future." Among its programs are public art projects - Manuel is an artist - like the jarring Museum of Incomplete, which uses artifacts of gun victims' lives to document what they left behind - journals, drawings, books, dreams cut short. For Joaquin, they contributed his basketball shoes to mark "the season he never finished, the life he never lived." Joaquin dreamed of his team, coached by Manuel, winning a championship; following his death, they finally did, and dedicated their season to him.

And on the fourth anniversary of his son's murder, Manuel climbed a 150-foot crane in the early, gusty morning - "A father's job never ends" - so “the whole world will listen to Joaquin today.” Atop D.C., in goggles and hard hat, he unfurled a massive banner with Guac's image to remind Joe Biden of his unrealized vow to enact gun reform; since then, 45,000 people have died on his watch. In a wind-whipped video declaring "Guac is with me," Manuel said he visited D.C. in December asking to see Biden. "I never got that meeting, so now I'm back with Joaquin," he said. "Happy Valentine's." On the ground, police gathered near a Guac-adorned sign that read, "Peaceful action in progress. It’s just my dad helping me make a statement. Sorry for the inconvenience.” Once Manuel descended, he was arrested. Later, he called the arrest and perilous climb "a little sacrifice - it was nothing" compared to over 200,000 gun deaths since his son's. He also announced a new campaign, Shock Market, to track gun deaths still averaging a horrific 100 a day; its first goal is for Biden to deliver a gun-control plan in next month's State of the Union speech. The project, as always, seeks to "keep Joaquin next to us on this fight." In 2020, Joaquin was also there - literally, hauntingly, harrowingly brought back to virtual llife via AI technology, asking viewers right before what would have been his first election and a key chance to make change to "vote for me, 'cause I can't." The eerily life-like Guac apparaition was "very hard to watch for us to watch, said Patricia. Still, she beseeched, "Please listen to what our son has to say."

"Yo, it's me. It's Guac. I've been gone for two years and nothing's changed, bro. People are still getting killed by guns. Everyone knows it, but they don't do anything. I'm tired of waiting for someone to fix it...We've got to end this." - Joaquin Oliver in Unfinished Votes.