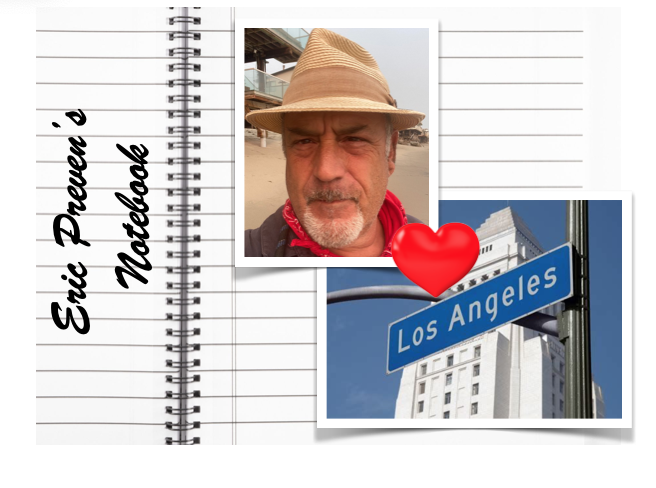 ERIC PREVEN’S NOTEBOOK - Nury Martinez the President of the City Council faced sharp criticism implying that her kibosh of the City's Redistricting commission's recommendations was evidence of how insecure, but I thought also vulnerable, she really is.

The speaker Rob Quan said, her time was limited.

My time was severely limited this week at City Hall because if the Council President has a choice, why would she hear from someone who could potentially expose stuff?  Though David Zahniser and Dakota Smith are still in place at City Hall, Jaclyn Cosgrove is all alone at the County and there are zero beat Reporters at LA County Metro. The LA Times is hiring!

Welcome and so long:

The reorganizational meeting and election of Chair Pro Tem for 2021-22, happened at the County Board of Supervisors this week.  The second banana job was handed to Sheila Kuehl, who has a steady, firm hand... on the MUTE switch used to shut down public speakers.  Holly Mitchell took over...

Michael D. Antonovich served as Chairman of the Board of Supervisors (to which he was first elected in 1980) in 1983, 1987 and 1991 and as the so-called "Mayor of Los Angeles County."  He also liked Cowboy hats and Sheriff Deputies.

Holly J. MItchell should also call herself the "Mayor of Los Angeles County."   I wrote to her this week...

By sneaking item 44-E on the county's supplemental agenda today, sometimes referred to as the green sheet, the board is continuing it's crusade to  meet without the public in the room.   And so continue the shocking defiance it has showed for the Governor's order to maximize access and transparency.

The following idea tucked in to some routine cancellations "...the Board should continue to hold its Regular Meetings virtually at 9:30 a.m. every other week, with certain exceptions" is, I submit, a bad idea.

A large number of Angelenos and journalists respectfully, disagree.

On what grounds is Supervisor Mitchell extending the wholesale reduction by half of the county's Regular public meeting time?

The Board of Supervisors should agendize the subject of Public Meetings so that the public has the access and transparency it needs, at what should be WEEKLY thank you and congratulation gatherings.  This will unstuff the agendas slightly, and allow public scrutiny, which is essential.  And what about the pet adoption program?

If all of the animal control employees have resumed working with the public, and Sheriff deputies and other frontline responders, why then, are the Supervisors not able to put up a piece of plexiglass, if needed, require masks and face the public who put them in office.

Sofi has been hopping!

Due to the COVID-19 pandemic, the Board of Supervisors (Board) began holding its Regular Meetings virtually at 9:30 a.m. every other week to protect the health and safety of employees and the public. Considering the uncertainty of the pandemic, the Board should continue to hold its Regular Meetings virtually at 9:30 a.m. every other week, with certain exceptions. The Board’s meeting calendar is available online at: http://bos.lacounty.gov. Special Meetings should be held virtually, as needed, on those Tuesdays when there is no Regular Meeting. When public health conditions allow, the Board will resume its meetings in person. In addition, the Board meetings listed below will be canceled.

I THEREFORE MOVE THAT THE BOARD OF SUPERVISORS Cancel its Regular Board meetings on the following dates:

In 2016 and 2017 when Hilda Solis and the other Supervisors who were around simply looked away from the evidence that the county's highly lucrative chain of Golf courses had been exploited by Englander Knabe & Allen, I thought she might be a... vendida.  Among Latinos, to call someone a vendida stings even more than the English translation.

According to Gustavo Arellano, the Times columnist, it means "the individual in question knows how hard Latinos have it in American society, claims that struggle for themselves, vows to champion their community upon making it to the big time, but instead not only forgets their roots but also..." let's the PRIVATE EQUITY's nose under the tent.

If you are Hilda Solis, that's got to hurt.

But Hilda Solis is resilient and so are the other first to five (all female) supervisors who all had nothing but praise for her stewardship through the pandemic.

I'd heard the term stewardship earlier in the week when a clip from Zev Yaroslavsky the former Third District Supervisor, current director of the Los Angeles Initiative at UCLA Luskin, was saying  “We can’t wait until 2028 to solve Homelessness. We’ve got to solve it now.”

Janice Hahn, who was speaking with Solis in high school spanish at the outset of the Board meeting to subtly note that her fourth district is going to have a new swath of hispanohablantes, despite Don Knabe's defensive efforts in 2011, "Hilda, how did you have enough hours in your day?"

Solis could have answered, "Well, by cutting back on public meetings, there's a lot more wiggle room and time to name stuff including villages after yourself."

At the city this week a small group led by Blumenfield agreed to rename Gaspar de Portola Middle School as the William Lambert Middle School. One suggestion, from me, to name the school the Fielding Mellish Middle School to commemorate Blumenfield's voracious appetite for FEMA funding, was preempted by the Council President who for two separate big agenda short time meetings, with over 100 items and less than 60 minutes comment time over both days.

Back at the county after the lather up, Supervisor Solis said from a prepared statement,  "I'm holding back tears, but it's a day of celebration... " She went on for quite a while and finally admitted that Holly MItchell will do a great job... "and the expectations are high for women of color."

She said earlier her greatest accomplishment was "unleashing" so much talent in the county.

Max Huntsman, the Regular OIG sent in Cathleen Beltz, the Assistant Inspector General, to remind, "The death reviews are thorough... the critical incident review process is effective, methodical, self-critical... it's the best I've seen in all my years."

There is a longstanding tradition at the county of tearing into idiotic reports put forward by the Sheriff's department, mercilessly. Gloria Molina was a leader, Antonovich could play ball, and the federal indictee, even former Supervisor Mark Ridley-Thomas could hit from time to time. He was mostly out to lunch, literally. He'd swagger back in with his sidekick/bodyguard.

The most damning criticisms used to come from the advocates and windbag members of the public, such as me before the board separated comments from items like they do now.  Anyone who takes a moment to try to understand a Sheriff's report knows... it's infuriating.  "You can't fake clarity," but nobody gave that memo to the department.

But the truth is, Corbett is mesmerizing and chemistry is everything.

Barger cross examined the CEO about the contention by the Sheriff that he had been limited to funding only four classes by the Supervisors. CEO Fesia Davenport did everything to avoid saying it, but finally admitted in the end that the Sheriff was not lying or distorting on that.  Barger: No further questions.

Sheila perked up and took the Sheriff's hitting his budget, as an example of the Board's power exercised appropriately.

The meeting was so long that later in the meeting she seemed confused as to what POWER she even had, if any.  She feels she just has responsibility.

Janice Hahn asked the Sheriff Deputy who should do voice overs and used the expression "depopulate" while talking about "pregnant females" about the recent deaths from drug overdoses and about drugs getting in the Jails.

Supervisor Hahn applauded the use of Narcan.

Sup. Janice Hahn:  Everyone will want to say, you  know, we need to do a better job at the source, as opposed to, you know, obviously saving the person once they are in the midst of an overdose. And my question is, I know there is technology available to scan the mail for these substances.  Is that true, and are we looking to maybe buy that technology?

The chemistry between Hahn and this hard core Sheriff was good.

Sheriff Deputy: Yes, Supervisor. As a matter of fact, I am dating myself here, it looks like one of the old overhead projectors, it is similar to that, and it is like a spectrograph, it is a bit expensive for the CEO to purchase, we would like those, yes, to identify if the substance is on a letter or mail, but it identifies the substance, it goes that far to tell you what it is.

Sup. Janice Hahn: I am all for the Narcan and trying to treat it once it is happening, but what are we doing to get at the source? You mentioned mail, are there other ways the drugs are getting in and the substance is on the paper of the mail, is that correct?

Sheriff Deputy: Yes, supervisor. We are finding they are liquefying several types of narcotics and it is laced with fentanyl where the individual does not realize it has fentanyl in it. I don't want in a public forum to talk too much about how it is coming in, if you understand the concern.

There was another record set in Paul Krekorian's Budget and Finance committee as zero departments wanted to say anything or ask questions on the CAO report relative to the Second Financial Status Report FY 2021-22 (FSR).

It was nice to see that he allowed  Matt Szabo, the CAO, to reiterate his promise to implement performance metrics against City departments. It's long overdue. A kind of internal city enforcement.

Szabo claims that the charter is very clear, but for years nobody was punitive enough to get it done.

Since the Youtube generation of council committee meetings is strictly off camera, we are not sure about reports that Szabo was clad in a Black Genuine Leather Jumpsuit with Belts & Buckles.  Mayoral spanking has been zeitgeisty...

LA Has Ignored Its Urban Forest. Who Will Pay The Price For This Negligence?

Covid Criminality Is Popping Up in LA.  Beware.

The Other Pandemic: Destroying Kids' Childhood By Adults Acting Like Children