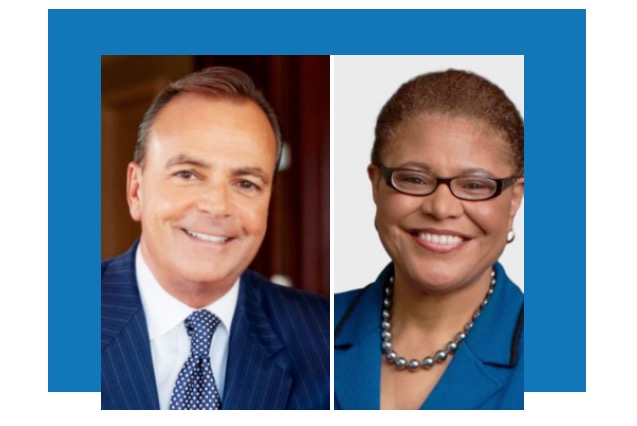 LA ELECTION WATCH - If these were normal times, the regular exercise at the ballot box is simply choosing the lesser of two evils.

But these are not normal times. It is a Trumpian worldview that defines the times in which we live. America is divided and being manipulated between factions with campaign lies, propaganda and accusations to persuade you to vote against your self interests based on fear of crime, economic uncertainties and prejudice.

Sure the billionaire mayoral candidate Rick Caruso is far more savvy than Don-the–Con could ever hope to be,  but still his attack campaign against Congresswoman Karen Bass, is as corrupt and misleading as anything that I’ve ever witnessed in my 50 years of voting.

Caruso’s $30 million advertising blitz reveals one very important truth―billionaires are now so emboldened that they actually believe  they have the right, if not the privilege, to buy elections.  Clearly, if money is speech, which is  supported by the Citizens United vs. the Federal Elections Commission  US Supreme Court decision in 2010, then Caruso is shouting louder than anyone else in the election to replace Mayor Eric Garcetti. Shouting doesn’t make him right.

Enough about another fake Democrat trying to buy this election. Karen Bass is the real deal when it comes to being dedicated to fixing the problems of Los Angeles. She was raised here, went to public schools here and worked in the medical field in LA and was a leading political organizer before ever entering politics. When she became Speaker In the California Assembly, she was the first African-American woman ever to lead a state legislative body.

I’ve said it before, Karen Bass is probably the most qualified woman to ever run for mayor of this city!  That she knows how to bring diverse and disparate interests and people to the table to solve problems is a sign of her commitment to inclusion.  And that she knows that the City of Los Angeles annually leaves millions of federal dollars unapplied for that are available to address a multitude of problems is only a plus. Hey, she even was considered to be on the ticket with President Biden as Vice President so she definitely has access to the White House and to Congress. Would Biden or Harris even return a call to Caruso?

In other parts of this country, the battle lines are clearly delineated between the Big Lie insurrectionists and an array of Democrats who  still believe in having a republic.  Yet here in the City of the Angels, this civic divide is more muted, subtle if you will. Caruso, now supported by another fake Demo- Councilman Joe Buscaino, and then LA County Sheriff Alex Villanueva, are all running far to the right of center on knee-jerk reactionary fear mongering tactics. Fear in politics is the foundation for tyranny in a democracy and reason and truth are the antidotes to it.  We know this from 2,500 years of history. In fact the very term democracy comes to us from the Greek word, “demokratia,” as do other terms.

The Greek word, “Dikasteria,” or the public courts, according to Aristotle, “contributed most to the strength of democracy.” This is due to the fact that the judges exercised almost unlimited power. Interestingly, there was no police force, and so the common people filed and argued their cases themselves, and the verdicts were given by majority rule. This concept of original democracy starts to sound a bit like “defund the police” as opposed to “let’s hire more cops.”

My point here is that our democracy hangs in the balance between moving to a more fair,  equitable and inclusive secular government OR moving towards a repressive tyranny, oligarchy and theocracy.  We’ve already seen what five anti-abortion Catholic judges on the Supreme Court have brought us. And I’m not about to endorse anyone who comes close to filling those definitions like Caruso does.

So clearly Los Angeles doesn’t need a Monopoly billionaire running the city like his own personal fiefdom. What’s needed in the words of Thomas Jefferson: To cure bad government is not more laws but more democracy.

And we might say what we need now is not more police to arrest people but for the justice system to enforce the laws more equitably regardless of financial status. Because of this I have grave doubts that a billionaire regardless of his past philanthropy and civic appointments would be a trustworthy holder of the honor of  being mayor for the future of 4 million Angelenos.

I do, however, find it very curious and significantly gratifying that it’s an extremely well qualified black woman with years of experience that will be the one to defend our democracy.

(James Preston Allen, founding publisher of the Los Angeles Harbor Areas’ Leading Independent Newspaper 1979- to present, is a journalist, visionary, artist and activist. Over the years Allen has championed many causes through his newspaper using his wit, common sense writing and community organizing to challenge some of the most entrenched political adversaries, powerful government agencies and corporations.)