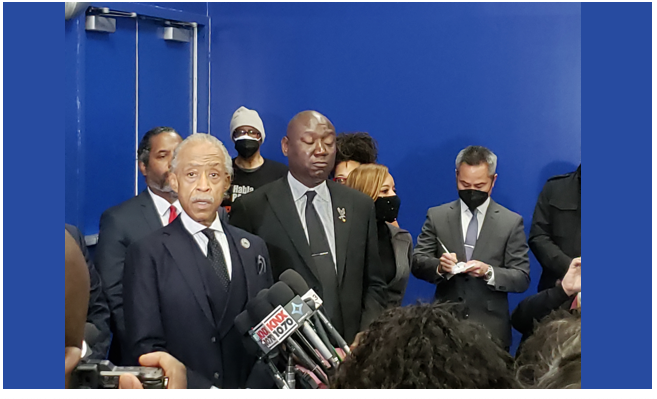 JUSTICE WATCH - Civil rights leader the Rev. Al Sharpton delivered the eulogy at the funeral for 14-year-old Valentina Orellana Peralta, who was killed by a Los Angeles police officer December 23 while shopping at a North Hollywood store.

Attorney Ben Crump, who also handled the high-profile cases of George Floyd and Ahmaud Arbery, also spoke at the funeral and press conference held January 10 at the City of Refuge church in Gardena.

The press conference and funeral were attended by several hundred, one hundred of whom were media, and included family, anti-police brutality activists and clergy. This is the highest profile case of a Latino/a killed by the cops nationally.

A statement distributed by the LA Hands Off Cuba Cttee, entitled “Why there are no George Floyd’s or Valentina Orellana’s in Cuba” was well received.

Valentina and her mother, Soledad Peralta, were shopping for dresses and in the changing room of a Burlington store when one of three rounds fired by Officer William Dorsey Jones Jr. penetrated the wall and struck Valentina, who died in her mother’s arms.

LAPD officer Jones was firing at an unarmed man, later identified as Daniel Elena-Lopez, who assaulted a customer with a bicycle lock. In released body camera footage, other officers were shouting to Jones to slow down as he moved to the front with his AR15 assault rifle ready to shoot.

Standing in front of nearly 100 members of local and national media, Al Sharpton, president of the National Action Network, condemned the cop and the LA Police Department for the use of excessive force.”  Despite the fact that this is a not a white officer, it is a bad shooting.  It is reckless behavior that resulted in the death of a 14-year-old girl.  We would be less than civil rights leaders if we were not to stand with the family.  Valentina could have been my daughter.  So, we are not here to displace activists but to support them”

Demanding that the “police must be held accountable”, Sharpton was joined by nationally known Attorney Ben Crump who told the gathered media, activists, and family “We march for justice for George Floyd and now for Valentina.’  They called for a full investigation, adding that “the eyes of the nation and the world are watching as we did in Minneapolis in Brunswick, Georgia. (Floyd and Arbery killings-mf).  “We are asking the mayor and the CA Atty. Gen. to treat this case is if it was your daughter.”

“What more innocent life can there be other than Valentina?  added Sharpton “the value of a life was not considered here.” Justice must be justice no matter who it is and who is involved” Sharpton said. “I'm not going to feel better if a Black officer shoots me.”

When attorney Crump was asked by a reporter if there have been any positive efforts to reform the police in the wake of relentless cop killings nationally, he noted “Since the killing of George Floyd 400 cities have instituted regulations against police chokeholds.  Since the murder of Breanna Taylor 100 cities have abolished no knock warrants.”  But little seems to have changed in LA where police killings occur weekly, “investigations” held, and cops exonerated.

At the funeral itself, Ben Crump opened with the statement “We came to make a plea for justice.  Justice represents protection of the innocent.  Who is more innocent than 14-year-old Valentina Orellana?  Her innocent blood has the attention of those in LA, Chile and all across America.  We say no peace without justice.  The blood of Valentina will not come off the hands of the LAPD who have justified this unjustifiable action.  He then led the crowd in chanting “Valentina is innocent”.

During the funeral service, the father, Juan Pablo Orellana, assured that he will not rest until there is justice for the death of his daughter.

"We will never get over it," he continued. "They have destroyed us as a family and as parents we wish with all our heart that no father or mother in the world lives this sadness that will last our whole lives."

The funeral was followed by a caravan to Attorney General Rob Bonta's office in downtown Los Angeles.

(Mark Friedman is the Labor/Health/Environment/Science/Education reporter for Random Lengths News where this was first published.)