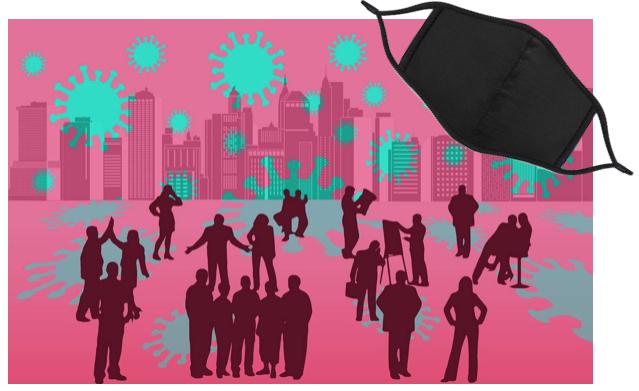 Rather, he was delivering on two campaign promises (1) 100 millions shots and (2) centrist governance.  He eschewed criticism of the former President and focused on what was good for everyone’s families.

KISS! This principle is vital to any social messaging.   This motto had three simple elements “Let’s All,” “Mask Up” and “Herd Immunity.”

These two words recapitulate Biden’s campaign promise that he would be the President for “your family.”  It’s like a salutation in a letter, “Dear Fellow Americans.” Also, it is a call for cooperation in a national endeavor.  Back in early 2021, Biden had an target date for herd immunity, July 4th.  He was wisely building upon his 200 million shots in the arm in 100 days.  Reaching Herd Immunity by July 4th seemed like quite a task, but so too did 100 shots in 100 days. People generally respond well to a challenge especially when their leader has just delivered the seemingly impossible.

Everyone can mask up very easily, but as social messaging, it has additional advantages.  It runs on peer pressure.  When one is not wearing a mask, it is obvious.  While people may have their own anti-mask clique, going into a grocery store is not the same as grousing with your buddies.

Masks do not harm people. The false claim that people cannot breathe was quickly dispelled, especially by doctors who wear masks for hours while operating to save people’s lives.  It really should not take a genius in social messaging to make the link between doctors and nurses and every day folks wearing masks.  Similarly, there are professions like painters who wear masks to protect themselves. Our lives are filled with mask wearers.  It is not a bizarre concept.  As competent social messaging experts know, the message should not raise resistance.  Businesses do not attack their customers.  The commercial “People drink our XYZ lite beer because they’re stupid” is not likely to air during the Super Bowl.

Herd Immunity can be achieved only by massive vaxing so that the virus has no place to grow and mutate and hence dies out.  Alpha Variant was bad enough, killing hundreds of thousands, but once we had the vax and Biden had succeeded with 200 shots within 100 days, we had a great foundation for success, provided we stopped the transmission via everyone’s masking up.

Herd Immunity has its own social messaging which should have focused on the progress which we were making as a nation.  On May 13, 2021, the message should have been that Herd Immunity was being threatened by a new variant, the Delta Variant, but we can prevail as long as we know the enemy and we take effective action.

Masks are effective to stop the transmission of the virus. There has been unnecessary confusion of the distinct roles of masks and vaxs.  Masks provide no immunity, but they stop the transmissions, Vaxs do not stop transmission, but they provide immunity.  With covid, immunity is not a 100% thing.  Too many people thought that once they got vaxed, they could throw away their masks.  That is similar to removing the breaking system from your car because you had an engine tune up. They serve entirely different functions, but CDC Walensky mislead the nation into the false belief that masks and vaxs were fungible.

On May 13, 2021 CDC Director Rochelle Walensky declared that good vaxed people did not need to wear masks inside but bad unvaxed people had to wear their masks as a modern day Scarlet Letter.   This grossly incompetent social messaging was highly divisive.  In a single day, Walensky and Biden had destroyed his centrist governance.  As science, it was malpractice.  The CDC already knew about Delta Variant.  Thus, Walensky had to know that we needed more masking for the vaxed. Again, Covid vaxs do not stop transmission. Vaxs lessen the severity and increase the number of asymptomatic carriers.  That means everyone, especially the vaxed needed to mask up!

The unknown is whether on May 13, 2021 Walensky intentionally gave the completely wrong message in order to strengthen the Wokers in Congress by destroying Biden’s centrist approach or whether she is truly this incompetent, or both.

After one falls out of a tree and break his arm, his arm is broken and there are no do-overs.  One can, however, learn not to do the same thing and avoid breaking his other arm.  While Joe Biden can never undo his dividing the nation over mask wearing so that we were vulnerable to the Omi Variant, he had a simple choice on December 21, 2021: either return to his pre May 13, 2021 centrist approach or continue being a divisive woker. Biden has chosen the latter.

“But uptake [of vaccinations] slowed this summer as vaccine resistance among some hardened.  Look, the unvaccinated are responsible for their own choices.  But those choices have been fueled by dangerous misinformation on cable TV and social media.  You know, these companies and personalities are making money by peddling lies and allowing misinformation that can kill their own customers and their own supporters.  It’s wrong, it’s immoral, and I call on the purveyors of these lies and misinformation to stop it.  Stop it now.”

Who told Biden that his calling people “wrong, immoral, purveyors of lies and misinformation” would do anything other than repeat his May 13, 2021 disaster in spades?  Without his attack on conservative social media, his speech was only a C minus.  Its vilification of the anti-vaxers made it an F minus.

The Right Wing Nuts and the Left Wing Wokers are in a battle to the death – our death!  Each is insane enough to believe that they can prevail 100% and vanquish the other.  Being a centrist is neither easy nor a guarantee of success, but following Pelosi and the Wokers to attack the Whites as immoral liars will completely destroy Biden’s centrist approach.

With More Divisiveness, We Will Never Reach Herd Immunity

There is only one path out of this jungle of vicious politicization of everything. That is a centrist approach.  The Alt Right is less than 15% and the Alt Left is less than 15% which leaves Biden with 70% centrists.  Why pander to a divisive minority and leave the majority locked out?  Talk about being woke. Wake up, Uncle Joe!  Americans find the Wokers to be a greater threat than the insurrectionists.