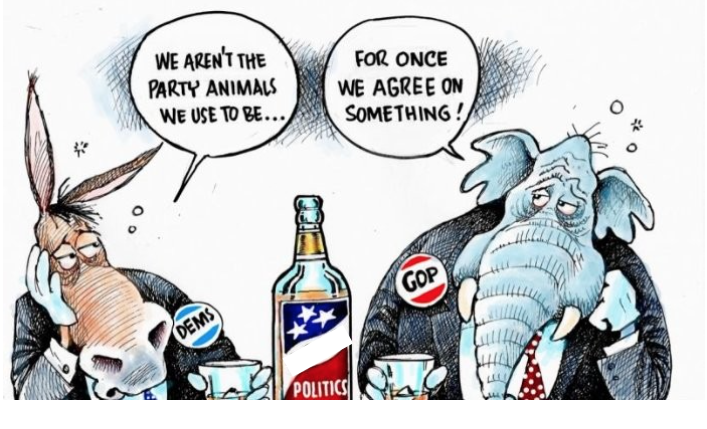 THE DOCTOR IS IN - Like it or not, we just prevented and voted down a recall effort against Governor Gavin Newsom, in large part because the issues morphed from financial mismanagement, lack of infrastructure, an explosion of homelessness, and shoving of the middle class out of the Golden State...to a silly focus on vaccination by Larry Elder the main GOP challenger.

Like it or not, we had an eruption of GOP takeovers throughout the purple/blue state of Virginia, and New Jersey governor Murphy came frightfully close to another upset in what is an overall blue state, and also saw several blue to red flipping of open House of Representatives seats throughout the nation.

Like it or not, President Biden has had such a focus on "un-Trumping" America that he ignored his promises to govern from the center (clearly, Bernie Sanders is the effective President of the United States), he ignored the very large number of voters who preferred Trump, and the policies that Trump actually got right.

1) So maybe we can remember that Milwaukee, Baltimore, Los Angeles, San Francisco, Chicago, et al are exploding with poverty, homeless, huge divides between the police and its residents, and a chasing out of both the middle-class and the GOP alike.

We need Democratic leaders, but not THESE Democrats!

2) So maybe we can remember that the explosion of homeless and destruction of middle-class jobs and an ever-widening divide between the rich (Big Tech, Big Hollywood, Google/Amazon) and everyone else is NOT being done on the watch of the GOP.

In reality, more housing is being built for the wealthy and house flippers who don't give a damn about the middle class...and so long as the wealthy pay most of the taxes in our state, and are the most connected, this terrible reality is here to stay.

And government- and lobbyist-supported home builders and their contractor allies are getting PAID  under a Democrratic Sacramento/Los Angeles one-party control to build "affordable" and "homeless" units at cost that are hundreds and thousands of dollars higher than is needed and/or reasonable.

3) So maybe we can remember that Governor Gavin Newsom waited until the recall effort failed to sign a horrible series of bills from the uber-left-leaning Sacramento, one-party Legislature that will destroy environmental law and destroy proper and reasonable zoning efforts throughout the state.

It's amazing and breath-taking to see those who HATE and DESPISE the GOP more than words can express, both here and abroad, fight Sacramento about the zoning laws being imposed on us...and yet are SHOCKED (SHOCKED, I tell you!) that this trend of cruel laws driving the middle-class out of the state is occurring on the watch of anyone BUT the GOP.

4) So maybe we can remember that the citizen/grassroots empowering Neighborhood Councils were started with widespread fanfare by former Republican  Mayor Richard Riordan, and then have been smashed under Democratic Mayors Antonio Villaraigosa and Eric Garcetti.

Let's not mince words:, the once-centrist Democratic Party, both here and abroad, have morphed from a centrist, JFK-dominated structure to an ever-left leaning, top-down, and arguably quasi-fascist form of government.

Hate and despise the GOP all we want, the infrastructure and grassroots activism of a two-party system is kind of nice...because a dark blue state is no better than a dark red state with respect to true, legitimate American-style representative government.

5) So maybe we can remember that our homeless explosion, and the termination of once-prevalent cost-effective middle-class housing has NOT occurred under the GOP, and that President Biden has shocking and unexpectedly come against zoning for single-family zoning.

And let's not get started on the energy independence, border crisis, and Mideast policies that for some reason have been thrashed because they were on their way to resolution under that awful, tweeting Trump.

So let's reconsider how a two-party system can be kinda nice.

After all, it's not like our one-party system has that great a track record, be it one party or the other.