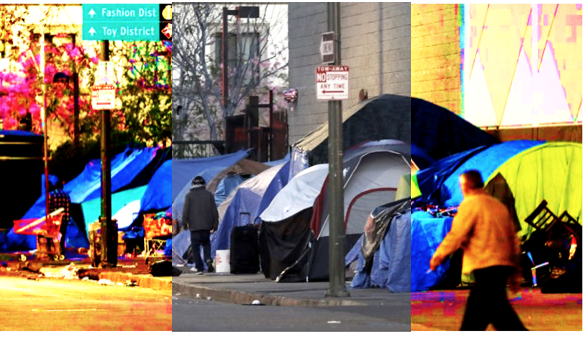 EASTSIDER - What does it say about the ethics of a Los Angeles mayoral candidate who capitalizes upon the suffering of the homeless to advance his/her career without discussing his/her role in creating the homeless crisis?

For steady readers of CityWatch, I believe that I could stop here in hopes that they would draw upon all the material that various CityWatch contributors have written over the last decade and more.  However, many readers have not been here that long. Thus, I will connect some of the dots.  I hope no one will feel offended if I am re-stating the obvious.

In 2012, CityWatch published Hollywood Become Fraudywood. Two years later in January 2014, Judge Allan Goodman adopted as his ruling the sum and substance of that article and similar articles about the deteriorating situation in Los Angeles and the basis for the decline.  (The data and articles  had become part of the administrative court record)  Judge Goodman found that then Councilmember Eric Garcetti’s 2012 Update to the Hollywood Community Plan was “intentionally” based on “fatally flawed data” and “wishful thinking” to the extent that it “subverted the law.”  For short hand, we adopted the term Lies and Myths.  To this day, Garcetti continues to use Lies and Myths to justify his illicit scams.

Everyone in City Hall, however, knew what was occurring. Corrupt developers were running amuck destroying rent controlled housing (RSO units), adding more subways and fixed rail as fewer people were using the  misleadingly named “rapid mass transit.”  The developers focused on buying RSO housing as it was the cheapest to buy and its residents were least able to fight off the developers’ predatory practices.  In the abstract, Buy Low Sell High sounds okay, but when it means throwing the poor, disabled and the elderly on to the streets to suffer and die, Buy Low Sell High becomes a formula for evil.

No councilmember may claim that he/she was not culpable in creating the homeless crisis since councilmembers never vote No on the destruction of RSO units. One may not pretend not to be one of the bank robbers when one holds the gun on the teller, helps to loot the vault and then drives the getaway car.

The foregoing hardly covers even the chapter headings how the politicos in Los Angeles knowingly manufactured and then took advantage of the homeless crisis.  As voters, now would be an apt time to pounder:  What sort of ethics does it take for someone to make the plight of the homeless a campaign issue in order to personally benefit his/her career when they themselves helped to create the death and destruction?