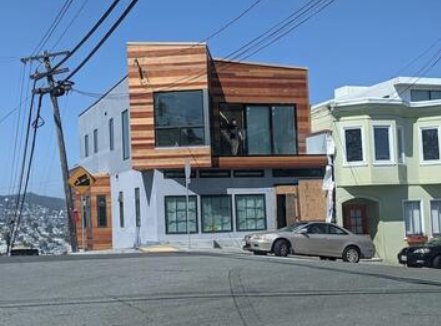 HOUSING WATCH - I spend entirely too much time listening to experts in business, government, and academia explain the economy in general and the property market in particular.

Looking back, very few people who are purported to know how the economy works, based on empirical evidence, have successfully predicted the wild spikes and crashes over the years. Worse still, every attempt to provide housing to the broad middleat a price ordinary people can support keeps failing in more and more places. This isn’t just a local or even national problem. It’s happening all over the planet. So, I tend to rely on what I personally observe on the ground in what officialdom dismisses as anecdotal references.

I enjoy chatting with strangers as I walk around the city. People self-select in or out of these conversations, but the ones who chat back teach me quite a lot I’d probably never know any other way. This lady described how she and her husband built this home themselves back in 1953. He had just returned from the Korean War, rolled up his sleeves, bought lumber, and built the place with the help of his working-class tradesmen family members with minimal debt.

Land was affordable, building materials were readily available, and regulations hadn’t yet twisted themselves into the Gordian knot of the present moment. Construction permits were a simple over-the-counter transaction for a nominal fee. I’ve talked to many people of that generation all around the country, including a few of my own relatives, and it was common for people to build their own homes seventy years ago, even in big cities.

Here’s another little tidbit about this house. According to the algorithms, this place is currently worth $1,400,000. Rent for a property like this is assumed to be $4,500, although that number is substantially too low in my experience. Public records show property taxes on this house are $766 per year. That’s a consequence of Proposition 13, a 1978 tax revolt that caps property tax at the value of the house on the day it was purchased, plus a 2% annual increase, rather than present value.

That one law is probably what’s keeping a lot of older folks in their homes as prices reached for the stars over the decades, which is exactly what the law was designed to do. But it had unintended consequences. In order to make up for the lost revenue, the city has found all sorts of alternative income streams, not least of which is to massively jack up the cost of new building permits. This same couple couldn’t duplicate the construction of their own home today largely because the culture and economy that existed in 1953 is entirely gone.

Half a block away I’ve watched as this house was transformed over the last few years. Built in 1906, this was a corner shop with additional living accommodations, most likely for the family that ran the shop. That was the year of the great San Francisco earthquake, although this neighborhood is built on pure rock and was largely spared the worse direct effects of the disaster. A century ago, these small shop houses were the ultimate in financially self-supporting homes. The income from the business paid for the living space. Some decades ago, as supermarkets made small neighborhood shops redundant, the retail space was repurposed into a second apartment and the building became a duplex.

In 2017 it was sold as a fixer upper for $2,000,000 and was given a radical renovation. These total transformations are common and often organized by professional high stakes flippers. When it was sold it was occupied by two rent-controlled tenants who had the legal right to remain no matter what. Protracted legal battles are expensive and unpleasant so renters are generally bought out as part of the transaction. The going rate is $100,000 per unit. That’s a lot of money, but given the overall cost of the property and ensuing renovations, it’s an acceptable cost of doing business that’s rolled over into the final price tag of the project. I know several people who gave up their rent-controlled apartments at that price point, some more willingly than others. It’s almost always a one-way ticket out of the city.

San Francisco has laws that forbid the physical removal of housing units from the market, so this place will remain a duplex on paper. The people who own it will probably never rent either apartment. Rent control, implemented in 1979 as a counterweight to Prop 13, is too onerous and whoever can afford to buy this place doesn't need the extra income. So, it's either just a big house that happens to have two front doors, or it’s two luxury condominiums. This is all part of the stairstep transition from small-scale, mixed-use, moderately priced property toward homes at a shockingly high price. The city says it wants affordable housing, but the market presses in and the tax revenue and job creation from these flashy renovations is intoxicating.

It’s tempting to blame convoluted rules and regulations that restrict free markets for the current housing situation, and that’s definitely a factor. No question. Each little rule, restriction and fee crept in over time like an alluvial delta with powerful constituencies. But there are other forces at work driving prices this high that have nothing to do with construction or housing policy.

Some of you may be aware that large corporations borrow money to buy back their own shares from the stock market. Interest rates are low, companies have access to unlimited amounts of easy debt, and buying their own shares drives the stock price up. That’s the metric by which executives are judged and paid. Why bother earning money through actual productive activity when it’s possible to conjure funds out of thin air with a little hypothecation? That takes us back to my anecdotal observations.

Read the rest of this piece at Strong Towns.

Johnny Sanphillippo is an amateur architecture buff with a passionate interest in where and how we all live and occupy the landscape, from small rural towns to skyscrapers and everything in between. He travels often, conducts interviews with people of interest, and gathers photos and video of places worth talking about (which he often shares on Strong Towns). Johnny writes for Strong Towns, and his blog, Granola Shotgun.