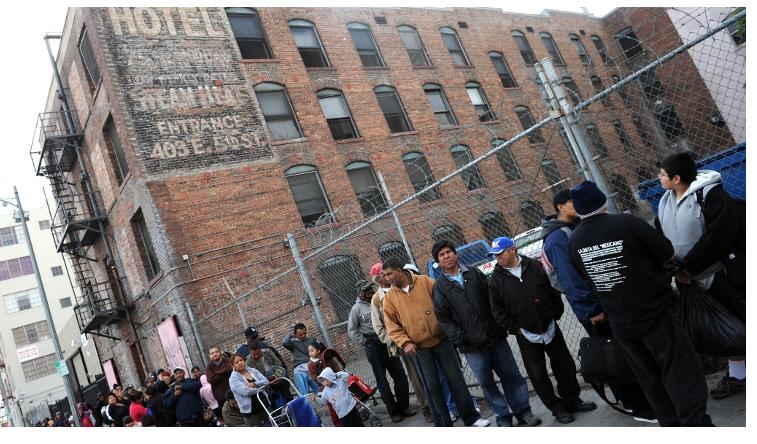 THE VIEW FROM HERE - Angelenos do not have to accept the deterioration of Los Angeles into a corrupt oligarchy where the wealth flows to the top and the homeless with their feces and trash flow into the streets.

Psychologists speak of Secondary Gains which people derive from bad situations. The phenomenon is sometimes described a co-dependency, i.e. the victim cooperates in enabling the abuser to continue.  People with alcoholic partners get a secondary gain from lamenting their problems and getting sympathy from others.  If the spouse goes on the wagon, they will push him off.

The same applies to Angelenos and the vast criminal enterprise which runs the city.  All ones needs to do is drive under freeway underpass in Hollywood to know what something is terribly wrong.  While the LA Times will claim  that homelessness is the fault of mental illness and drug addiction, Angelenos are too brain washed to ask, “Why did mental illness and drug addiction cause a homeless Crisis only after Garcetti became councilmember for Hollywood’s District 13?”

Virtually everyone remained silent after Garcetti became Council President and Hollywood slipped into an abyss of filth.  Mum was the word after Garcetti became mayor and typhoid entered city hall, the homeless started fires which burned homes in Bel Air and the homeless died on city hall’s sidewalk.  All of officialdom accepts the Big Lie that Los Angeles in general and Hollywood in particular is dynamically growing.

In 2012, Hollywoodians Encouraging Logical Planning (HELP), however had presented the US census data that Hollywood was losing population and if Garcettism continued, the city of LA would lose population.  In January 2014, Judge Goodman accepted HELP’s evidence that the city used fatally flawed data to the extent is subverted th law. The 2020 US Census proved that that Hollywood is still losing population (down to 195,709 ppl) and the city itself lost population despite the billions of dollars to densify LA.

Everyone should know that the lynchpin in the city hall corruption which is destroying Los Angeles is the city hall’s criminal vote trading system.  Any project a councilmember places on the agenda wins approval unanimously.  This means that no one can stop the extreme densification of Los Angeles which is killing the city.  Densification concentrates wealth in the hands of a tiny cadre of developers who own the land where the high rises and mixed use projects are constructed.

There Is an Alternative

The City Council can be changed.  The prime evils of the city are: (1) No political parties at municipal level, (2) exclusive geographic representations.

(1) No political parties.  Yes, it sounds bizarre to say lack of political parties contributes to corruption when parties are the number one engine for corruption in American history. In California, however, political parties may not endorse or oppose candidates for the non-partisan city council elections.  The unforeseen consequence of keeping political parties out of local politics is that there is no balance of power.  There can be no Anti-Developer slate of candidates.  Thus, developers can fund the winning candidate in each council district.  The developers have billions of dollars and the homeowners are disorganized and basically have zero dollars for political campaigns.  Thus, developer money will defeat any councilmember who is not sufficiently pro-densification.

(2) The evil of exclusive geographic representation.  This is the real crux of our problem!  People are so habituated to one politician representing each specific geographic area, that they cannot envision any other arrangement. The evil rests in a councilmember’s being the exclusive representative.  There is no balance of power within a district when there is only one councilmember.  As mentioned above, the developers can buy the winning candidate in each district.

The Solution is Simple

The way to kill LA corruption is simple – each council district will have three at large councilpersons who are elected in the same election.  The top three vote getters will become the three councilmembers.

How Having Three At-Large Councilmembers per District Stops Corruption

Council districts are small enough for the voters to know who is a developer shill like Mitch O’Farrell in CD 13.  Even when a councilmember like CM Ryu loses an election, it is to a bigger pro densification hawk than Ryu.  If the top three voter getters in CD 4 had been Raman, Ryu, Sylvia Simons who would champion woonerfs and more parks near peoples’ homes, the vote trading system would have been destroyed/

Sylvia Simons would never vote for more densification and Ryu might grow a pair and vote against a Raman densification project.  That means when Raman proposes constructing a high rise poverty project in the middle of Los Feliz, her co-councilpersons would vote No. When the other CD4 councilpersons vote NO, there is no way to intimidate the other 42 councilmembers to vote Yes.

Since the second and third vote getters in any district will have their own non-developer supporters, they will lose supporters and lose the next election if they kowtow to the developers.

While Raman shows that a candidate can briefly deceive a majority of the people, she cannot deceive all the people.  Those not duped by the developer money will vote for Sylvia Simon.  The developers cannot stop Sylvia Simons from becoming one of the three at-large councilpersons.  Thus, Raman could not guarantee a developer that his project will get unanimous approval.

The thing which keeps the criminal vote trading system alive, other than Judge Fruin and the FBI’s looking the other way, is the power of retaliation.  Since each small minded greedy politico wants to be the absolute lord or lady of his/her fiefdom, they want to make certain each other councilmember always votes Yes. If one councilmember should vote No, then nothing he wants will pass.

Three at large councilpersons per district makes retaliation impossible.  Raman cannot retaliate against councilpersons in CD 5 or CD 12 when  Ryu and Simon voted No.

Angelenos can change the LA City charter so that each district has three at-large councilpersons elected at the same election, but too many people like the corruption and too many other people love complaining without taking effective action.

(Richard Lee Abrams has been an attorney, a Realtor and community relations consultant as well as a CityWatch contributor. The views expressed herein are his own and do not necessarily reflect the views of CityWatch. You may email him at [email protected])   (Photo credit : GABRIEL BOUYS/AFP/Getty Images)(credit: Gabriel Bouys/Getty Images)