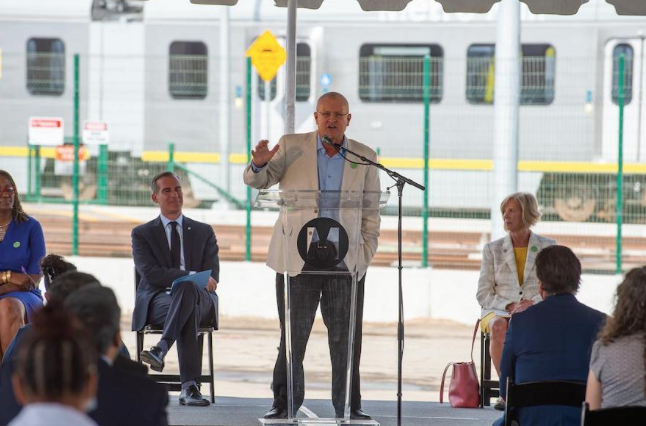 LA POLITICS - How does one apply the very campaign tactics of former President Donald Trump on one hand, and claim to be a “progressive” on the other?

It’s a precarious balancing act that lacks any serious credibility as LA Councilman Mike Bonin is actively fundraising to avert a second recall attempt that is based on his miserable record and not his registration as a Democrat.

It’s important to note that Los Angeles council races are non-partisan affairs and in most cases, all the candidates are Democrats.

In fact I can’t remember the last time a Republican has run for council in the 11th CD and when the last time a member of the GOP made a serious race for any office in which Venice is part of the political equation.

Now fundraising under the moniker, “Stop Right-Wing Recalls,” the good councilman can’t name or identify a single member of the GOP that is part of this mounting recall threat that will gather the required numbers of signatures to remove him from office.

For it is no longer about his failed tenure, but about the math.

And the math indicates the recall campaign will be successful no matter how hard he tries to stop it!

For why can’t Bonin name or identify by name these mystery right-wingers?

As his mindless followers are “doxing” the likes of Democrats Katrina Schmitt and Nico Ruderman, the official co-coordinators of the Recall Bonin 2021, both Venice residents and former supporters of the embattled councilman, just where are these so-called conservatives?

Doxing is a new tactic of disclosing personal information about these local advocates tired of the failures and incompetence of Mike Bonin’s near decade tenure in office that has hurt real estate values, a sharp decrease in tourism here at the beach and a notion that dangerous encampments that in many cases are now controlled by gangs and the drug trade are perfectly fine and should be embraced as friends and neighbors!

For Ruderman, a community officer with the Venice Neighborhood Council, father, husband and resident is not really political at all, just someone brave enough to challenge Bonin’s incompetence and to simply seek new leadership that listens and is not toxic or combative with the very voters he pretends to represent!

In Katrina Schmitt, you have another Venice local being harassed with violence that occurred after Bonin’s campaign disclosed her name and address online that resulted in her having to leave her residence for fear of her safety?

Bonin does not even acknowledge these sick acts of violence, preferring to describe them as a “Venice issue” while ironically addressing a meeting of Pacific Palisades Democrats who had the courage to confront Mike and his latest style of gutter politics!

More importantly, why is the media allowing him to skate free, not holding him even remotely accountable for these actions and outright lies?

Let’s review the latest slew of lies and inaccuracies:

Mike has the temerity to claim the recall is “wasteful and dishonest,” while his entire narrative to disrupt the recall effort is patently false, untruthful and now riddled with bullying tactics against a woman who is more of a Democrat then he could ever claim!

This notion that those who oppose Bonin are Trump followers or Republicans in a place where such individuals don’t reside or exist is more of a page out of George Orwell’s Animal Farm, creating false premises that have no basis in the truth.

I’ve been a Democrat all my life.

I’ve been a member of the West LA Democrats since their inception in 2004, long before Mike Bonin was ever a member.

I was an executive officer of the Young Democrats of America and I’m a retired meat cutter with the United Food & Commercial Workers Union, AFL-CIO (Local 464-A).

Where does Bonin get off on questioning the credentials of Democrats who are united in removing him from office?

What makes them any less a Democrat and this false allegation of “Trumpism” are just not true, but is Bonin himself borrowing these tactics to confuse the public because he is unable and unwilling to defend his record that is in many ways, indefensible?

I know Mike Bonin is lying and so should you because the tip is obvious, his mouth is moving.

The author is a member of the Oceanfront Walk, Parking & Transportation, Outreach and Rules & Selections Committees of the Venice Neighborhood Council (www.venicenc.org) and can be reached at (310) 621-3775 or via e-mail at [email protected]

(This story by Nick Antonicello was first published in yovenice.com.)