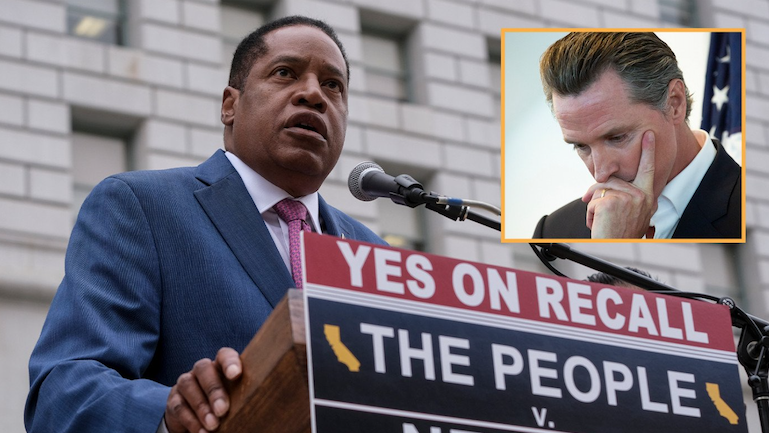 THE DOCTOR IS IN - The above photo is from the Babylon Bee, which is a conservative satire website that is both snarky and cynical, and can be both serious and comical...from a right-wing standpoint.

The comedy/satire piece this photo is attached to is entitled "Racist Democrats Desperately Try to Prevent Black Man From Becoming Governor of California".

The title will certainly infuriate some of you reading this, while others may chuckle. But in the big picture, there's nothing funny (or false) about it. Race politics have never been this widespread, and the presumption that voting or even thinking a certain way on the part of black Americans (and for white voters "woke" to the plight of black Americans) has never been this widespread, either:

1) There's a reason why both Republican and non-Republican voters are voting in droves for Larry Elder. Both Republicans and their non-Republican counterparts have witnessed full-scale how Republican squishes like John Cox and others have offered no real alternative the California Democratic Party Machine dominated by Gavin Newsom and his mega wealthy allies.

And let's be honest...just as the Republican Party of California is all-too-often a corporate-sponsored Loser Machine, the Democratic Party of California has become a Corporate Woke Machine where an elite few get rich (and some of youse guys and gals want a piece of that, right?) while the middle class (all races) either flees California, or to suburban or rural California, and relocates to...

...and relocates to (repeated here for emphasis)?

...and relocates to REPUBLICAN portions of California or the REPUBLICAN states of the U.S. where they can be left alone, keep what they earn, and not have the government tell them how to live, think, or say.

And, oh yes, the middle class is respected and have a shot at the American Dream (a good job, a chance to succeed, a house, and the ability to take a vacation at times).

It should be emphasized that Larry Elder, as emphasized in his political website (LINK: https://www.electelder.com/vision/), describes how he eschewed political aspirations but has been motivated to run against Newsom. \

No infrastructure, no affordable middle-class housing, and no choice of schools for non-wealthy Californians are among the policies he wants to fix. And those issues affect Californians of ALL races.

2) So why does the L.A. Times choose to vomit out a piece that declares that black American Larry Elder is the face of white supremacy?

And why does NBC News, in acknowledging Elder's upending the California recall of Gavin Newsom, declare him a "right-wing provocateur"?

Good questions that you and I both should ask, because Elder is NOT a typical Republican, and is as libertarian/pro-middle class/pro-pursuit-of-happiness as they come. And Elder does NOT follow the now-racist left-wing (and now mainstreamed among many Democratic acolytes) talking points and dogma that black Americans are supposed to VOTE and even THINK a certain way.

While the core of the Democratic Party has lurched to the Far Left, capitalizing on both a horrible pandemic and the horrible fate of George Floyd to seize on anger and frustration by a miserable and scared American public, the core of the Republican Party has rejected their own leadership to promote Elder.

And both Republicans and Independents (and more than a few Democrats), in focusing not on party politics but on the plight of the middle class now have to endure being called racist just because they took the high road.

The Republican elites include carpetbagger John Cox (who would drop out if he wasn't such an egotistical loser) and the Democratic elites include current Governor Gavin Newsom who has done everything BUT defend everyday Joe or Jane Californian.

Both Newsom and Cox take black and brown Americans for granted, and neither have done enough to promote the opportunities and dignity of Asian-Americans (or any other Americans, for that matter).

And Elder is one who does want Americans of all races to both think for themselves, and stop thinking of themselves as a person of a given race...and to focus on being an American. Of course, this scares the hell out of a Democratic and a GOP leadership that stopped caring about anything more than money and power, to the exclusion and suffering of their constituents, long ago.

The Pew Research Center reported a year ago that only 25% of U.S. Hispanics have heard of "Latinx", but only 3% use that term. Deal with it...or at the very least, try to respect Elder, who like others among us has the moral fortitude to deal with it.

Less than 5% of Americans celebrate Kwanzaa. Deal with it...or at the very least, try to respect Elder, who like others among us has the moral fortitude to deal with it.

Asian-Americans have to witness GOP politicians ignoring their growing numbers, while also having to witness Democratic politicians who "care about them" while promoting college and job acceptance policies that smack around and crush the Asian-American paradigms of achievement, hard work and meritocracy more than any other ethnicity in the United States.

And white Americans are just SICK of being told they're racist no matter how hard they try to appease non-white American, while the race-baiters and "professional racial icons" gleefully suck up big money and power off of dividing America, and in so doing crush the once-and-still-lofty goal of achieving an American Melting Pot that once made this nation a happier place to live.

Hence do those who've listened to Larry Elder for years, many of them Democrats and Republicans and Independents alike, want to at least hear what he has to say.

4) Hence there are a few media outlets that rightfully decry the absolute lunacy, fallacy, and truly-deplorable idea (the word "deplorable" is chosen deliberately) that Larry Elder is the new "black face of white supremacy".

He isn't a typical Republican, can't stand the old-school, rich-and-white GOP Elites, and can't stand the second-generation of left-wing acolytes who gleefully and publicly sew the seeds of racial division...and in so doing destroy the quality of life for the middle class, who just want to be left alone, be free to work and pray and speak their minds, and want to be proud to be an American.

Because they want to at least hear what Elder wants to say, and perhaps they've chosen to vote for Elder because they are just SICK of people like Newsom, Cox, or the Sacramento Elites tell them how to vote, eat, think, talk, spend, or otherwise live their lives.

Larry Elder, or any other black American who agrees with him, is NOT an "oreo". He is NOT a "black person who is thinking the wrong way". He is NOT a stooge for white racists. He is NOT someone who will put up with any black racists.

He's just a man who adheres to his own beliefs. Kind of like how we all should act, and live, and cherish.

So Californians have figured out that those screaming about how "a vote for Elder is a vote for racism" are actually the TRUE racists they need to look out for, and defend themselves against (LINK: https://www.city-journal.org/playing-race-card-on-california-gubernatorial-candidate-larry-elder).

And if you don't want to vote for Larry Elder, then fine.

Just do it based on his policies.

But don't do it because you're a goddamned racist.