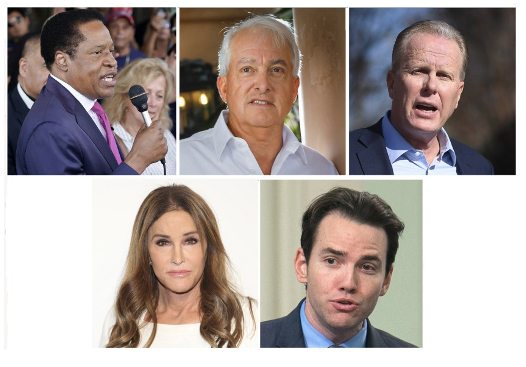 COMMENTARY-We have a raft of right-leaning Republicans vying to replace Gavin Newsom as Governor of California.

Their backgrounds and platforms may be all over the conservative side of the map but there is one goal that they have in common: to free California businesses from the regulations imposed by God Gavin.

And if you dig a little deeper in the dirt, most are overtly or covertly opposed to women’s rights. The misogynistic Larry Elder defended the premise that employers have the right to ask women if and when they plan to become pregnant in his book, Showdown: Confronting Bias, Lies, and the Special Interests that Divide America.

It was published in 2002 and, yes, people do change over time. On the surface and in promoting themselves. But their mindsets rarely do.

And Elder’s reasoning that government should not intrude on the relationship between employer and employee allows for a lot of leeway in discrimination and workplace abuse. Starting with abolishing the minimum wage across California.

Furthermore, only two years ago, Elder was calling for the privatization of Social Security – which would certainly mean profits for private interests and less money for retirees, with its most devastating impact on older women who tend to live longer and have fewer resources.

Only four of the 24 Republican candidates are women, one of those a woman-by-choice for the past six years. Another is a pastor, a third a virulent anti-socialist, calling Nancy Pelosi a domestic enemy. The fourth may be more nuanced but is still anti-mask, anti-choice and anti-racial justice.

A wide variety of fringe elements – from the Proud Boys to anti-vaxxers, from QAnon to white supremacists – are using fear to get out the vote. Their kind of vote. For their kind of leader.

The chief architect of the recall, Orrin Heatlie, posted the following on Facebook in 2019: “Microchip all illegal immigrants. It works! Just ask Animal control.”

Is that free speech or hate speech? It doesn’t matter. But it galvanizes a certain portion of the electorate.

And I and others – from Kamala Harris to the California Association of Realtors to all shades of progressive activists – are using people’s fear of these fringe agendas to turn out the “No” vote.

If you don’t think it could be “that bad,” where were you hiding during the Trump years?

The constant Republican messaging is that by removing the public health measures set in place by the Governor to protect Californians from COVID-19 and its subsequent variants, that the economy of California will somehow magically be improved.

That small businesses that suffer in the best of times are being compromised by the mask mandate, not by the vagaries of the market.

The lack of customers is definitely due to the pandemic – people who lost their jobs and family members, families with medical debt and who worry about what the future will bring – do not spend money.

But reopening sooner or preventing basic safety precautions would only lead to more deaths and less customers.

A Republican removal of public health protections would turbocharge California into becoming the next Florida.

A state where the Coronavirus body count has overwhelmed funeral homes and crematoria, where hospitals struggle to get rid of the dead to take in more of the dying.

Is this really what we want for California?

(Liz Amsden is an activist from Northeast Los Angeles with opinions on much of what goes on in our lives. She has written extensively on the City's budget and services as well as her many other interests and passions. In her real life she works on budgets for film and television where fiction can rarely be as strange as the truth of living in today's world.) Photo image: LA Times. Prepped for CityWatch by Linda Abrams.