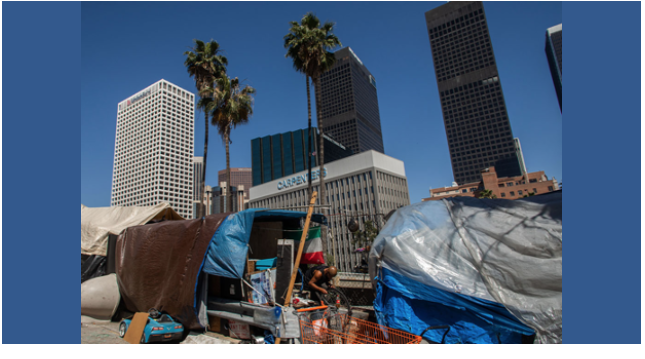 My parents and grandmother in 1950 were able to afford to buy a duplex in Los Angeles for us to live in for $11,000, a mile north of the LaBrea tar pits.

For two years I have watched the destruction of house after house in my Melrose neighborhood to build ugly McMansions selling for $4 million, and my block is a noisy construction pit to make developers rich. For the last years 2,000 Los Angeles had a commons that everyone could use that boosted this area’s economy. But in July 2017, the Los Angeles Times said, “State loses 1,400 jobs in June… because businesses cannot find applicant to fill jobs because rank-and-file workers can’t afford to live in the Golden State.” Who has the right to live in the city?

For the last 2,000 years ago the Tongva and the Chumash peoples in Southern California are the finest boat builders among the California Native peoples. To makes these superb, large canoes, they used driftwood found on the shore and tar from the LaBrea tar pits to seal cracks between the boards of their boats, to waterproof their baskets, and to attach wooden handles to stone blades.

The Tongva and Chumash use these canoes, holding up to 12 people, to catch fish and even whales, and they brought their trading goods to the villages on the coastline and villages on the islands offshore from Santa Barbara to Los Angeles. The two peoples considered their land a commons for all for catching fish and whales, foraging for plants, and taking tar from the tar pits. Prosperity depended on the people having a commons.

The Spanish, after they established the pueblo of Los Angeles in 1771, and the Mexicans after 1828 gave everyone gave the right to take pitch from the tar pits.  The Spanish, familiar with irrigation in desert lands, build the zanja madre, the mother ditch, as water commons moving water from the Los Angeles River to all the fields surrounding the pueblo. The Mexican also had a water commons allowing all to irrigated water. The Tongva people, having no written evidence to owning any land, had lost all their land—and still don’t have any land today.

After the Mexican-American War in 1848, Mexican land grant owners had to prove their ownership of their ranchos by having them surveyed by a U.S. government land surveyor and by filing claims with the United States Land Commission in San Francisco. The Rochas, whose land included the LaBrea tar pits, won their claim, but they like nearly all the rancheros went broke from the legal expenses and deeded Rancho LaBrea to Henry Hancock cheaply.  Few people came to live in the city from 1850-1880. Only after two railroads, subsidized by federal land grants, arrived in Los Angeles in the 1880s and a railroad rate war lowered rail tickets, then hordes of tourists could afford to come to L.A.

By 1905, the city’s developers wanted to grow Los Angeles from a city of 100,000, center of citrus farming, to a city of over a million people, but the city lacked adequate water. These city leaders convinced President Teddy Roosevelt to take High Sierra water in the eastern Sierras from Owens Valley farmers to Los Angeles to build a mighty imperial city. The federal government subsidized the Los Angeles aqueduct in bringing a huge new water commons to the city by 1912.

At the LaBrea tar pits, Los Angeles geologist Orcutt in 1901 announced that the bones in the tar were fossils of extinct animals. Excavators from around the world came to dig, taking the fossils out of the city, until G. A. Hancock, who owned the land, gave Los Angeles County the exclusive right to excavate from 1913 to 1915 to ensure that the fossils would remain in the city. The County of L.A. helped fund the digs. The new excavators dug 96 test sites over 23 acres at the tar pits, finding 8 major fossil-filled tar pits that yielded over 750,000 specimens of plants and animals which went to the Natural History Museum in L.A. In 1924 G. A. Hancock gave the site of the LaBrea tar pits to the County of Los Angeles to be developed as a scientific monument, and large-scale diggings ceased. These Anglo leaders gave land and money to the city to build the nucleus of its now great museums.

In the 1920s when film studios were expanding into Hollywood proper, the farms were replaced by movie studios and homes, and my parents’ house was built in 1928. On the flatland around Melrose Avenue, duplexes and modest 1-family houses were often bought by carpenters and plumbers:  people with steady jobs at the nearby movie studios. The idea was to have workers live near the studios to become a steady supply of workers.

During the World War II, Los Angeles had a horrible housing shortage. The New Deal thought housing was a right and had many programs to increase the nation’s housing. During the war the federal government built 14 big public housing projects. The Federal Housing Administration and the veterans’ home loan program gave millions insured loans to buy homes and helped eliminate the housing shortage in Los Angeles.

Across Los Angeles many unionized workers like my dad and our neighbors in Fairfax could afford and bought decent homes in which they raised families:  my dad was a postal worker, our neighbor was a carpenter at a Hollywood studio, another electrician, and my best friend’s father a shoe salesman. After the World War II, Jewish immigrants and their children, many of whom lived in Boyle Heights or others like my family immigrants from the East Coast, settled around Beverly/Fairfax Avenues which soon became the Jewish neighborhood in Los Angeles in the late 1940s and 1950s, when the land deeds of many parts of L.A. forbade selling to Jews, Blacks, Latinos, Asians etc. Many Jewish refugees still living in Europe moved to LA, settling in Fairfax where they felt safe.

When crews started digging in 1975 to build the Page Museum next door to the La Brea tar pits to house the many fossils from the tar pits, the diggers discovered the biggest collection of fossils yet from the late Pleistocene era. The Page Museum now displays Ice Age fossils from 10,000 to 40,000 years ago found in the asphalt deposits:  saber-toothed cats, dire wolves, camels, horses, mammoths, and many other animals.  Besides the Los Angeles County Museum of Art and the Page Museum on this land, the Peterson Automotive Museum and the Craft Museum opened across from the street, expanding four city blocks as the city’s museum row and intellectual commons.

In the 1980s West Hollywood and Los Angeles faced massive rental increases because the federal and local government had ceased to build public housing in the early 1970s.  In L.A., federal housing programs had ceased in the 1950s, and L.A. lacked any rent control. In West Hollywood a  of gay rights leaders and Jewish seniors including some of my mom’s friends were successful in incorporating West Hollywood as its own city and elected the nation’s first gay mayor. The area welcomed waves of Russian immigrants.

The Coalition for Economic Survival (C.E.S.), organizing in 1984, got one of the strictest rent control laws in the California passed in West Hollywood as well as getting a weaker rent control law passed in the city of Los Angeles—again the idea that people have rights to the city prevailed.  The real estate industry struck back by getting the state legislature to pass the Ellis Act, allowing landlords to evict tenants if they were going out of the business or converting their apartment buildings to condos.

In 1986 West Hollywood started the Housing Trust Fund to build affordable housing, while L.A. started tearing down its public housing projects.  West Hollywood has rehabbed 17 older apartments and built 4 brand new apartment houses for seniors over 62, the disabled including those with HIV/AIDS, and families with children involved in child welfare or who were homeless. Though the federal government’s low income housing projects were often criticized for poor, cheap design, West Hollywood has used architects to design innovative buildings while the McMansions in nearby Los Angeles have hack designs.

Patrick Tighe is the architect for the Sierra Bonita Apartments, affordable housing for the disabled and seniors that has won over 14 international, national, and local awards for the design of the building. Tighe Architects designed the building to be a pilot project for West Hollywood’s Green Building Ordinance:  they included solar electric panels on the building’s side and roof; residents’ balconies overlooking an inner green courtyard with bamboo, plants, and walkways; rainwater collection and then the water irrigates the drought-resistant plants. Also, West Hollywood makes its affordable buildings compliant with American for Disabilities Act and comfortable for the disabled.

Beginning in 2005 in L.A. the 1920s small, one-story duplexes, apartment buildings; single family dwellings; and historic homes across the city have been torn down. By 2015 Los Angeles again had a huge rental housing shortage with thousands of people paying half their income for rent, leaving them unable to pay for health care, and with the very poor living in tenements, garages, or hot bedding—two more people sharing the same bed in shifts. Air B and B has encouraged many landlords to end long-term rentals for short term rentals to tourists, contributing to the housing shortage. Pay-to-Play, where developers gave contributions to Los Angeles city council members and the mayor in exchange for quick approval of their huge, expensive high rises or McMansions dominates city politics.

No More McMansions, which 1st organized in Beverly Grove neighborhood in 2005 on the westside at LaCienega south of 3rd Street, has been leading a Los Angeles fight back against gentrification.  Other neighborhoods joined Beverly Grove as the fight against McMansions went citywide. By 2017 thirty small, historical neighborhoods including six from Rancho LaBrea now have protection against McMansions through Historical Preservation Overlay Zones, while Beverly Grove and 14 other neighborhoods are supposedly protected by zoning overlay ordinances. Further, the L.A. Conservancy, which has long waged non-violent guerilla war to save historical building after building citywide, helped save Norm’s Restaurant on La Cienega Blvd, an iconic 1950s modernist building.

Despite the protection of a small number of neighborhoods, gentrification continues to make a yearly loss of 5,000 units. City Planner Platkin argues that though Los Angeles city and county are allocating funds to build privately operated affordable housing, at best these funds won’t have any impact until 2-10 years.

Do all the people living in a city have rights to the city? Since 1992 the Tongva people, advocating for a cultural center at Kuruvungna sacred site in West Los Angeles near UCLA, finally got a Museum and Cultural Center on the campus where Tongva have the right to share their culture with Los Angeles school children.

The Los Angeles Times in an editorial August 8, 2017, “Stop ignoring pay-to-play” said when a slow housing growth was in the spring ballot, five L.A. City Council members “proposed to ban campaign contributions from developers seeking city approval for their projects.” After the voters defeated the slow growth measure, the City Council hasn’t even had a hearing on the proposal to ban developer contributions. The newspaper argues, “The mayor and City Council need to take pay-to-play … out of the city’s development process.”

For 2,000 years Native Americans, the Spanish, the Mexicans, and Anglo leaders have supported a commons which helped build the Los Angeles economy. Now in many neighborhoods many people are evicted and then forced to commute long distances to their jobs. Traffic and air pollution are worsening in Los Angeles. Are tens of thousands going to be pushed out to the farthest suburbs, driving hours on overcrowded freeways to their jobs, with many people losing their right to live in the city? Will much of city be only for a few to make real estate developers or the ultrarich? That will harm California’s economy. Or for everyone to contribute to the city’s and state’s culture and economy?

(Julia Stein is a writer who lives in the Melrose neighborhood of Los Angeles. An earlier version of her article appeared in CounterPunch.)