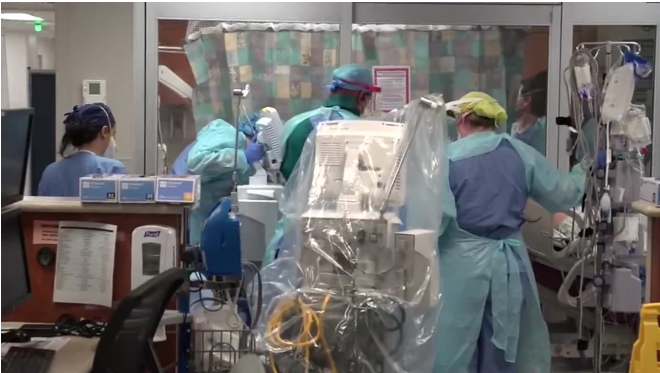 THE DOCTOR IS IN - I say this as a Republican who LOVES all my patients, and anyone reading this, be they Democrat, Republican, Independent, or otherwise. I just don't want any of us to die.

So if you're more interested in blaming "them right-wingers", and/or ignoring the millions of Latino and Black Americans getting sick or dying of COVID-19 right now, just move on.

In short, as much as those who just HATE former President Trump (and, by extension, the over 70 million who voted for him in record numbers for an incumbent) for "dividing the nation", the question of whether President Biden has united the nation as he promised is a salient one.

Because it's on President Biden's shoulders, and on his watch, as to whether we will get more people vaccinated and see fewer Americans get sick and die.

AND IT BEARS REPEATING THAT IF ANY OF YOU READ THIS DON'T GIVE A RIP, OR ARE EVEN HAPPY, TO SEE RIGHT-WINGERS, LEFT-WINGERS, LATINOS, BLACKS, OR ANY OTHER AMERICANS DIE, THEN YOU ARE THE ONES GUILTY OF SOWING DISCORD AND DIVISION THROUGHOUT OUR NATION.

Just because I, as a Republican Jewish American physician, have most of my friends, family and colleagues vaccinated, doesn't mean everyone is as lucky as I am. Most of you reading this know people who are not vaccinated, and/or won't get vaccinated, and right now this Delta Variant is so very "REAL" that we don't have the time to debate the Constitution, discrimination, or politics.

1) Even in Israel, where just about EVERYONE is vaccinated, masking indoors are now required. The Delta Variant makes last year's COVID-19 look tame by comparison. Sorry, but I didn't make this up, want this, or ask for this. Neither did President Trump or Biden...but they can fix it by working with each other for a united message.

2) Masking and social distancing are included in the few things that we can do to minimize the spread of COVID-19, but this Delta Variant is as contagious as chickenpox and the 1918 Swing Flu.

3) The increased contagious nature and virulence of the Delta Variant is a game changer, even after all we've been through so far. IT'S ALMOST CERTAIN THAT WE WILL ALL BE EXPOSED TO IT, VACCINATED OR NOT, AND THIS VIRUS DOESN'T CARE ABOUT OUR "COVID FATIGUE".

4) Why the heck the Pfizer and Moderna vaccines weren't approved by the FDA 2-3 months ago, instead of Emergency Use Authorization (EUA) status, is beyond me--too many have gotten sick and died because of this lack of approval...but it's coming.

5) Despite being a rather disgusting and divisive showboater, Dr. Fauci is a scientist who has been right enough to at least hear him out--once the FDA approves the aforementioned vaccines, mandates will be coming, no matter how much many of us feel they are unconstitutional. Imagine a sort of "martial law" sort of thing...when people start dying in high enough numbers, things CHANGE.

6) Why on earth booster shots for the immunocompromised haven't yet been approved by the FDA is also beyond me. How many have to die before the CDC latches onto common sense and current data showing how many have a blunted vaccination response due to their immune status?

7) And perhaps the CDC--which really IS going into illegal territory of declaring an extension of an eviction moratorium (isn't that the job of HUD?), should push for this booster shot effort, can find it in their heart to DO ITS JOB by pushing booster shots for the right people. Ditto for fast-tracking recommendation and support of FDA approval for the vaccines that are the ONLY way to prevent a life-threatening COVID-19 illness by the unvaccinated.

Finally, it's up to President Biden to get back to "uniting the nation"--because his partisan smackdown of the GOP and independents after his inauguration is biting him (and, by extension, the rest of us!) in the tail. Killing the Keystone Pipeline, allowing a Southern Border crisis, allowing crime to explode in the streets, allowing Mideast Peace to falter and China to become more powerful than ever...

...showed a big, fat middle finger to those who did NOT vote for him. And let's not get started about expanding the Supreme Court, statehood for D.C., and ending the filibuster. Trump and the GOP never did that, and now it's clear that Biden and the Democratic Party who got Biden into office wanted REVENGE after November's elections and four years of President Trump.

Fast forward to today--Biden wants us all to listen to him. But his credibility is sub-zero among those who didn't vote for him. COVID-19 is surging among those let into the country against American law.

There will be more vaccine mandates and passports, but will there be E-Verify for being here legally as well, which is a major issue among both Trump supporters and Trump haters alike?

And when DO we cut the crap about blacks and Latinos being too stupid to get voter photo ID when they already have it for just about everything else, which is also a bipartisan sentiment.

So, if Biden and the Democratic Party want "them right-wingers" and their own black and Latino constituents to NOT get sick and die, maybe they should set the example and do what is right and make the right gestures to truly unite us?

Because the question of whether or not President Biden wants us to live and unite together, and be a truly unifying President, is one that will be increasingly asked as the body counts go up, and as the masking/vaccination mandates also go up.

I hope that President Biden has the heart and spine to do just that--because many Americans' lives depend on that, for whatever reason or reasons there is.

I just don't want ANYONE to die. I hope President Biden and the rest of us feel the same way.