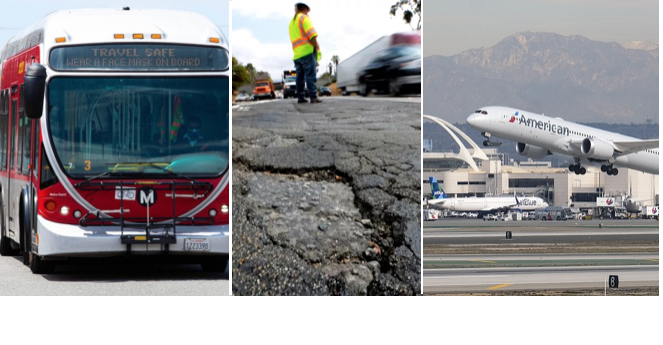 THE DOCTOR IS IN - I say this as a Republican who LOVES transportation/infrastructure (T/I) but T/I spent WELL.

Regardless of where you reside politically, if you really care about transportation/infrastructure, it's not hard to figure out that Democrats are most likely to DO SOMETHING when it comes to spending on our roads, rail, Internet, infrastructure, etc.

That said, too many Democrats are really as dumb as dirt-clods about WHAT they spend money on. The smart Democrats (and, of course, Republicans) are those who recognize they're working with others who have different priorities...and who recognize that THE PERFECT IS THE ENEMY OF THE GOOD.

Because when it comes to T/I, the average voter wants their representatives to DO something.

But after last year's COVID-19 pandemic, and as we plunge back into the hell that is the Delta Variant, the need to re-assess our transportation/infrastructure priorities is stronger than ever.

Although THIS group of Democrats tend to follow their parties predecessors with respect to throwing financial caution to the wind, the need to make up for past fiscal underfunding of T/I probably places them in the position of appeasing the desire of MOST Americans to spend MORE.

That said, the bipartisan Infrastructure Investment and Jobs Act is $550 billion is less than a quarter of President Biden's American Jobs Plan, which was to be $2.6 trillion in new spending over the next decade.

Most importantly, the ten Republicans who support this bill will allow this bill to become "filibuster-proof".

This bill is $550 billion, and President Biden originally wanted $2.6 trillion--if that's not an example of fiscal responsibility (or at least an earnest attempt), it's hard to guess what is.

Furthermore, as much as Democrats scream about "those tight-fisted Republicans", most of them look at projects like the CA High-Speed Rail project (of which I was once as erstwhile and loud an advocate as any) which is NOT very cost-effective, and scream three things:

1) Why the hell can't we fund the Valley to Westside Rail Line first?

2) Why the hell can't we widen the freeways where we can first?

3) Why the hell can't we get more Internet expansion first?

That last question, as COVID-19 rapidly accelerated remote  tele-commuting at warp speed, will be particularly critical.

Furthermore, the question of SAFETY of mass transit will draw attention away from rail (anyone who knows me is aware of how much I fought like hell for the Expo Line and Green Line/LAX and Regional Light Rail projects, so I am not anti-rail!) and back to roads and Internet expansion:

2) Proliferations of homeless and criminal elements aren't good for mass transit, either!

Electric vehicle funding by the feds got shot down big-time...but let's be clear about three things:

1) The private sector is recognizing the marketing and economic benefits of going electric with new cars.

2) Ugly as it is to say this, electric vehicles are by far too expensive for the average American, so if we "smell the coffee" then it's HYBRID until new or better technology is devised.

Finally, when it comes to infrastructure and energy, the questions that really aren't being asked are almost certainly not being asked by Democratic leaders...but perhaps Republican leaders with guts might do ask them:

1) Wind energy SUCKS when it comes to cost/benefit analysis, the environment, and the health of our avian friends flying in the sky.

2) Solar energy is very nice, but only as a nice supplement that has its cost/benefit flaws and maintenance issues, to boot.

3) Nuclear power--if we want to REALLY get off of fossil fuels--is something we're just too damned childish to confront as an answer that France and other nations are more interested.

But for now, it does appear that a two-party system, and even the Senate filibuster, can get us the ability to do things right.

And maybe--just maybe--we can extend those principles to the Democratic-run hells that our nation's cities and states (particularly those run by one party only, such as California) have turned into. After all, the cost and impacts of commuting, energy needs, and even the environment haven't exactly been a glaring endorsement of Los Angeles, San Francisco, or Sacramento.