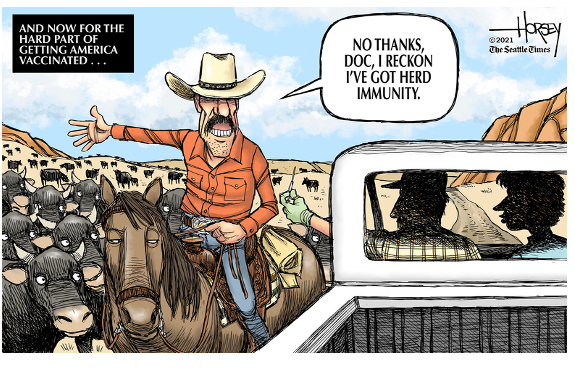 THE DOCTOR IS IN-We're exhausted and caught between competing messages and conflicting agendas that vex and infuriate virtually everyone.

And it's been suggested by more than a few people that the new mask mandate in LA County will save very few lives but infuriate just about everyone.

I again and again repeat the following:

1) 96% of doctors have been vaccinated against COVID-19, with the overwhelming majority having been vaccinated with the Pfizer or Moderna mRNA vaccines. That includes conservatives, liberals, Caucasians, non-Caucasians who have a full medical education -- and as much as there is widespread disagreement on the benefits of masks, we're all doing it.

2) Based on last year's findings and observations, catching COVID-19 during the summer is much less likely to significantly hurt or kill you, but catching COVID-19 during the colder winter months is much more likely to be dangerous, if not deadly -- and particularly so for those not vaccinated to the hyper-contagious and more virulent Delta Variant that was first noted in India.

3) India is clearly more densely populated, and clearly affected by a lower vaccination rate than the United States. Hence there may be over half a billion people infected, and over 1.5 million deaths, in India. Yet even if those numbers are too high and inaccurate, the number of new cases (and severe cases, at that) and even patient deaths are serious.

4) There is a growing trend among conservative and GOP leaders to get vaccinated. That includes conservative doctors like ME, who are absolutely disgusted with Fauci's grandstanding and potential past involvement with the lab in Wuhan, China where this virus may have been created and accidentally unleashed. Ditto with Biden's virtue signaling, and his exploitation of this virus to get elected and begin a "stealth" presidency that's been horribly divisive to the nation.

5) Yet it comes down to this: NO doctor, me included, wants anyone reading this, to get sick of even die. Very few people in the more vaccinated United States have died. . .but when they do, it's the unvaccinated. And those being vaccinated are apparently spreading this new Delta Variant because it is much more contagious than previous variants.

6) The press is too damned partisan to the Left, and to the Democratic Party, and have used fear and virtue-signaling to obfuscate the complex truths and facts about COVID-19. Governors Newsom, Whitmer, and especially Cuomo have physical, social, and economic blood aplenty on their hands. Yet those creeps have NOTHING to do with our individual choices to stay alive.

This is true both here in the United States and in Europe, where individual freedoms and health-related issues have torn those populations apart -- vaccine passports, shattered economic futures, and a lack of civil rights have infuriated large swaths of the population.

7) We want our lives back. We are frustrated with those who both claim to "follow the science" and those who appear to be "refuting the science", and "experts" have their own agendas. . .but lack sufficient and universal credibility. But the data that supports Texas, Florida, and Missouri being where the states where COVID-19 cases are rising the fastest cannot, and should not, be ignored.

8) Only in Israel, where virtually ALL of the population is vaccinated, has a nation been able to avoid lockdowns without significant numbers of deaths and seriously ill populations. Yet the hospitals have noted an increase (virtually all) in patients with COVID-19, even though a considerable fraction are vaccinated. . .but that latter group is just not as sick.

9) Ivermectin and Vitamin D can stave off the virus in many who get COVID-19, but the effectiveness and reliability of these medications absolutely pales to the benefits of getting vaccinated.

10) The greater the percentage of a population that is vaccinated, the more everyone is protected. This is the "herd immunity" that prevents or slows the ability of a virus to bounce around from person to person because those people are immunized from either vaccination or prior infection.

a) Infuriated and vaccinated individuals (who are NOT doctors) who wonder whether the benefits of going through the vaccination process was worth it.

b) Non-vaccinated people who wonder the same thing and question the risk/benefit ratio of getting vaccinated if the same restrictions apply.

c)Those who are at-risk and who know people who've overdosed, died, or even just had their psychological and mental impacts destroyed but have been ignored by a government that comes across as just not giving a damn about their/our collective plight.

12) Hence the questions surrounding the END OF THE MASK MANDATE (outside of medical settings) because those vaccinated are sick and tired of being restricted and wearing masks (most of us find them horribly unpleasant), and those unvaccinated-by-choice wanting to enjoy their choice.

So do we just end the non-medical setting mask mandate and let the chips fall where they may?

It is MY OWN OPINION ALONE that some who are immunocompromised, and who are around seniors and patients more than others, or who have certain illnesses that prevent a proper response to vaccination will need a booster shot at some point.

It is also MY OWN OPINION ALONE that stupid and conflicting political leaders and agendas be IGNORED and do what's right for you and your family.

Until then, we must all figure out how to stay safe and sane. Some political leaders need to be recalled, and others need our support. Because most don't appear to give a damn about our safety, freedoms, and sanity. This particularly true in Sacramento and Los Angeles.

(Kenneth S. Alpern, M.D, is a dermatologist who has served in clinics in Los Angeles, Orange, and Riverside Counties, and is a proud husband and father to two cherished children and a wonderful wife. He was termed out of the Mar Vista Community Council (MVCC) twice after two stints as a Board member for 8-9 years and is also a Board member of the Westside Village Homeowners Association. He previously co-chaired the MVCC Outreach, Planning, and Transportation/Infrastructure Committees. He was previously co-chair of the CD11 Transportation Advisory Committee, the grassroots Friends of the Green Line (which focused on a Green Line/LAX connection), and the nonprofit Transit Coalition, and can be reached at [email protected]. The views expressed in this article are solely those of Dr. Alpern.) Image: David Horsey, Seattle Times. Prepped for CityWatch by Linda Abrams.