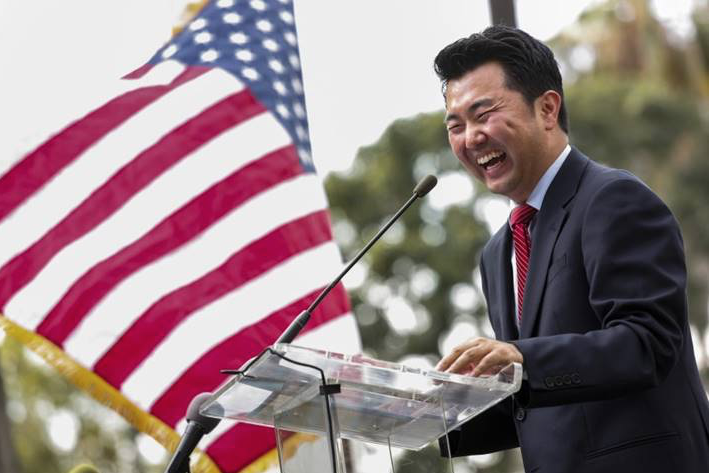 VIEW FROM HERE-When was the last time a sitting Los Angeles City Councilmember in District Four lost his re-election bid?  Since 1929, the answer is “never.”

What Did David Ryu Do So Wrong (other than ignore my advice)?

Heretofore, the rule in Los Angeles was that name recognition wins elections.  David Ryu accomplished what no other CD 4 councilman had achieved in 92 years. All the voters knew the name Ryu – even if 90% had no idea how to pronounce it.  Raman was a no-namer.

The City Is a Mess

LA has gone from the nation’s most favored destination in 2001 to the least favored destination city.  The irony is that decline occurred before Ryu was elected. Our descent corresponds with Eric Garcetti’s career as Los Angeles longest serving politico.  The more Garcetti gained power, the greater the deterioration. By 2010 Garcetti’s Hollywood CD 13 had lost so many people since Garcetti’s 2001 election that it ceased to qualify as a council district.  Thus, chunks of neighboring CD 4 and Koreatown were stolen and squashed into CD 13.  Garcetti was re-elected and Hollywood continued to decline.

David Ryu had a duty to his constituents in CD 4 to protect them from Garcetti’s Manhattanization, but he did nothing.  He was a nice guy amenable to whatever Garcetti and Garcetti’s Mini-Me Mitchell O’Farrell wanted.

Ryu had no record of challenging the corruption at city hall. He had five years to do something and he had done nothing. His challenger, the carpetbagger Nithya Raman, however, put up an impressive attack on the city’s problems and her site was stuffed to overflowing with tons of statistics -- true statistics which Ryu had been ignoring. She also proposed a number of solutions.

While the Pandemic Lockdown probably made the campaign websites more important, it’s doubtful that Ryu’s bland platitudes would have fared better in a traditional campaign.  Although Ryu had a page entitled “A Platform for Systemic Change,” he was silent about what was wrong with the city. (Also, Raman’s site looks as if it had been designed to be readable, while whoever did Ryu’s site knew nothing about reader psychology. “The message is in its receipt.”)

Both Ryu and Raman Wasted Time Proclaiming Their Ethnicity

This is LA – no one cares. One good thing about LA is that no one gives hoot whether you are an Asian Mexican transsexual or a closeted Gay Italian Jewish Mexican like our illustrious mayor.  Telling a city of immigrants that you came from somewhere else is inane.  With all of LA’s problems, one’s ethnic, religious, psycho-sexual background is of zero consequence.

What Is Important to CD 4 Constituents?

Look at CD4! It is a sprawling district with one unifying factor, i.e., its jewels.  From one end to the other, CD 4 is studded with wonderful middle class and upper-class residential neighborhoods with single family homes.  As Raman is now finding out, threaten CD 4's jewel of Los Feliz with your Wokerism, and you’ll face recall.  The movement has already begun.

Ryu had five years to oppose the criminal vote trading system at LA City Hall which has been turning LA into a third world city, but he did nothing.  He had five years to speak out about city hall corruption’s causing homelessness and warn CD 4ers of the menace which was advancing, but he remained silent.  Ryu spent five years being invisible when and where it mattered, and then wonders how he lost.

Too often politicos mistake their opponent’s loss as their win. Carpetbaggers are especially vulnerable.  Here’s a sentence to turn CD 4 against Raman: “And as bad as the City of LA is at building new affordable housing, CD4 is significantly worse than average.”  Translation: Build low class housing for criminals in Los Feliz.

Fern Dell Park is much nicer than the Berendo sidewalk.  Fern Dell is better than being next to a freeway with all the air pollution.  Also, there is plenty of room around the fountain at Los Feliz and Riverside Drive. How about a string of tents down the median strip of Highland Avenue between Melrose and Wilshire? Anyone, who thinks the homeless problem will not continue to increase as the insane Manhattanization makes tens of thousands more people homeless, has not been paying attention.

The mentally ill and those with criminal backgrounds have an extra hard time renting a new place even if they could come up with the money.  On the other hand, a  Coleman WeatherMaster 6-Person Tent with Screen Room costs $257 plus tax.

If Raman thinks homeless people encroaching on CD 4 neighborhoods will be a nightmare, wait for the post Covid Lockdown traffic congestion hits CD4.