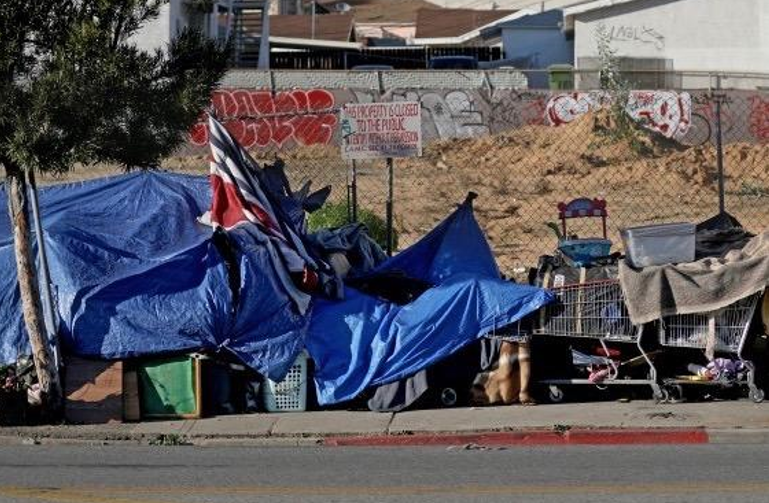 GUEST COMMENTARY--A homeless encampment on North Berendo Street—at Hollywood Boulevard—in Los Feliz has been taken over by a street gang that is listed among the top 10 in Los Angeles as most dangerous.

Narcotics, including meth, are routinely sold at the site—like an open-air drug market—to passersby and drivers of cars that appear at all hours of the day and night, prostitution has occurred, weapons have been brandished and shot, fires are frequent and propane tanks are numerous. Tagging is a regular occurrence, creating a turf war with another gang.

The initial homeless people—some of whom may have been “taxed” by the gang—have left the encampment and moved around the corner to safer spots on Hollywood Boulevard. One homeless man has fully furnished for himself a portion of a nearby underground tunnel that once was used for school children to trespass safely underneath busy Hollywood Boulevard to nearby Los Feliz Elementary School.

Renters and homeowners alike on North Berendo have begged, respectfully, for help since December for the situation, which deteriorates by the day. Their homes have been tagged with gang graffiti, their tires slashed and one gang member has mimicked slashing their throats or shooting them in video caught on their Ring camera. They have been chased and threatened with large shards of glass.

But no one can seem to do anything. The Los Angeles Police Dept. has made a few arrests of the gang leader and his girlfriend at the site, for car theft and illegal possession of a gun, but because of California’s lax laws regarding crime, both were released within hours and returned to the encampment.

Because of rules the Los Angeles City Council enacted at the onset of the COVID-19 pandemic, the encampment cannot be cleared or cleaned. This ruling still stands even though COVID-19 cases are so low that all of Los Angeles County is reopening. Further, the pandemic showed, homeless people did not contract COVID-19 in the numbers officials once feared, primarily because they live outside.

And because of homelessness protections, due to “12 different agreements based on lawsuits,” as one LAPD officer recently said, its hands are tied. For instance, the LAPD cannot enter the encampment without a warrant. These days, a tent for a homeless person or a wood-framed dwelling on the sidewalk—as is the case at Berendo—must be treated as if it is a house. According to the LAPD, the encampment is a gang enterprise, so it is unclear why they don’t indeed request a warrant to enter.

There seems to be only one play the city can make to relieve the situation and that is to have its sanitation department remove the encampment as it blocks the sidewalk and is, therefore, not in compliance with the American with Disabilities Act (ADA).

Los Angeles City Councilmember (Council District 4) Nithya Raman just recently requested the city take the ADA enforcement route. It is unclear why she is only taking this action now, as she has been aware of this situation since December. Even one LAPD officer wrote in an email a few weeks ago, “The encampment needs to be removed. . . . We are just waiting to hear back from CD #4.”

Raman refused to be interviewed for this editorial. Her spokesperson, Jesse Zwick, said he would get back to me on what has taken Raman so long to act.

So, hurrah, right? The encampment—and the myriad of criminal activity going on there—is going to get shut down, right?

In an April 6th Zoom meeting on the issue, Raman’s staff indicated that the city’s sanitation department would only be exchanging the current wood-built encampment with camping tents.

When will this happen? No one knows.

Sanitation must first attempt to “educate” the gang encampment about the ADA rules, give them notice and time to make their encampment fit within these rules. Only then, if the gang does not comply, will sanitation take down the encampment. And then, they will, remarkably, hand over new tents for the gang members, in which to live.  They will also have to provide storage to the encampment dwellers if not all of their things—like so many stolen goods including a floor to ceiling cache of torn apart bicycles—no longer fits in their new tent digs.

The entire situation is exasperating for those living on Berendo Street who detail sleepless nights of surveilling the encampment to ensure their own safety. They report feelings of emasculation, anxiety, depression and PTSD and have truly come to feel they have no rights as tax-paying citizens. Not only do they believe the homeless have more rights than they, but apparently, so do criminals who have slyly taken on the guise of homelessness to conduct crimes.

Right now those gang members and their visiting “associates” are laughing their heads off at Raman and the city. What a perfect ruse. Pretend you’re homeless.

The residents have asked for a Zoom meeting with Raman for three months. They did finally get 45 minutes this week with her along with the LAPD, the Mayor’s and the City Attorney’s offices, all of whom, except Raman, have already been directly in touch with concerned Berendo Street residents for many months.

Sadly, residents finally had Raman on the line, but she offered nothing up but a “woke” word salad on the issue in the 8 minutes or so that she spoke, and right on cue, at the 44 minute and 30 second mark she said she would have to leave the meeting to care for her children. This is the fourth time since January—that I know of—where Raman has used the excuse of her children to leave constituent meetings before they were over. It’s bad form on her part, disingenuous and needs to stop. Children should not be used as excuses or props for an elected official to repeatedly get out of answering tough constituent questions. (For the record, I have suggested to many Council District 4 community members that have also expressed frustration with this, to stop asking for Raman’s time near the dinner hour and/or the put-the-children-to-bed hour.)

But what’s even more noteworthy, is during the time Raman was on the call, she completely missed the entire point of it. The issue is not about a homeless encampment. The issue is about a gang that is committing crimes and hiding in plain sight under the auspices of being homeless.

Instead, Raman, more or less, did a campaign speech on the call using all the right homeless buzzwords, including “the complexity of homelessness,” the “challenge of being homeless,” the need for “sustained outreach,” “the most important thing is services are housing,” and the need for more funding to “expand those tools” and “making sure every dollar is being spent effectively.”

She even took a swipe at her predecessor and the city in general (meaning Los Angeles Mayor Eric Garcetti) saying how the city has never had “sustained” outreach to the homeless, gaps have existed, and how unfair that has been. And then she took a victory lap saying that since she took office, “we are filling that gap,” and we’ve had “small successes” at Berendo with three homeless people there accepting shelter. Indeed, that is accurate, but all have returned to the encampment.

Further showing her lack of awareness, she continued for her short 12 minutes total, about how the homeless “process takes time” and repeatedly mentioned the “enormous” amount of time her staff had worked on the Berendo issue.

If Raman’s staff has worked so many hours on this issue, then why has it not improved? Why has it only gotten worse?

Let’s hope Raman and LA Sanitation can get something done real quick on this issue before Los Feliz Elementary school, a block away, resumes next week. Or before someone, including the truly homeless in the area, gets hurt or killed.

In one of her last remarks, Raman actually said this to a group of residents, her constituents, that have lived in fear of the lives for months: “My work on homelessness has always been about getting people into houses. And the reason is because people who are experiencing homelessness are the primary victims of crime; they are vulnerable to being taxed; vulnerable to sexual assault.”

That is true Nithya. But your very own constituents have been telling you for months of their own vulnerability after a gang decided to take over their street.

Los Angeles City Councilmember Mitch O’Farrell recently had a very large encampment at Echo Park Lake taken down, under the auspices that the park needed repair. He took a lot of heat for it, but many of the 200 or so at that encampment are now in some sort of shelter.

There is nothing compassionate about letting homeless people live and die on the street. Compassion is picking them up, getting them into shelter or creating a conservatorship for those —who are mentally ill, drug or alcohol addicted—where they must be picked up, for their own good, willing or not.

If the gang element is not removed from Berendo as soon as possible, the city of Los Angeles can expect a lawsuit on the issue, and Raman, a recall.

As one Berendo resident said: “Criminality is not only in the commission of unlawful acts, but in the omission to address them.”

(Allison B. Cohen is the publisher of The Los Feliz Ledger, where this perspective was first posted. She can be reached at losfelizledger.com.)

Cover Photo: The wood-beamed encampment is covered with various tarps. There are three “doors” to the encampment, one that has been described as where drugs and money are exchanged. In the background, is Barnsdall Art Park, a UNESCO World Heritage Site. Photo: Allison B. Cohen, April 8, 2021.