PLANNING WATCH-To be clear, the drive to maximize profits is not based on an alleged personality trait called greed, as put forth by Gordon Gekko in the 1987 film Wall Street. It comes from our economic system’s DNA, regardless of our personality types.

This is obvious when we place Los Angeles under the microscope. Separate decisions by thousands of institutional and private investors, supported by City Hall enablers and cheered on by advocates and apologists, are bringing LA to its knees.

True, these local officials have been dealt a bad hand, which they then played badly. Enormous political and economic forces have buffeted the entire country, including Los Angeles. These dedicated operatives of the Urban Growth Machine, played their part well in this drama, unconsciously ushering in three devastating crises.

Homeless crisis: Homeless encampments, people living in cars, overcrowding, and out-migration are the visible parts of the housing crisis. They are the 10 percent of the iceberg above the water line, with the other 90 percent out of view. Yet, if elected officials only address the 10 percent that is visible and ignore the submerged causes of homeless, is it any wonder that the housing crisis gets steadily worse? Their short-term cures are nothing more than band-aids for the visible part of homelessness, such as tiny houses or empty hotel rooms for those vulnerable to Covid-19. Other fixes, specifically density bonus housing, make the housing crisis worse. They allow developers to build over-sized apartment buildings on recently bulldozed in-fill sites. They simply need to pledge to include a small percentage of never-verified low-income units in their market rate projects.

The missing 90 percent - the causes of homelessness beneath the surface.

Factor 1: Poverty has grown in Los Angeles, before and during the pandemic.

Economic inequality is also increasing, especially in California. According to Yahoo News, during the pandemic the number and wealth of California billionaires soared. At the same time, 2.7 million jobs disappeared in California, many of which will not return. In Los Angeles, the wages for the lowest paid workers have declined by 25 percent since 1979, made worse by the 2020 recession and lockdowns.   These economic changes have hit renters hardest, with many moving out or facing eviction.

Factor 3:   Until the 1970’s the Federal Government built and operated non-market public housing. By the early 1970’s the number of the public housing units reached 2,000,000 units. Since then, Congress and the White House have eliminated nearly all of HUD’s public housing programs.   Even though there still are local housing authorities, they manage legacy units, not new public housing units. While Section 8 vouchers remain, defunding has created an enormous gap. In Los Angeles 600,000 people want Section 8 housing vouchers, but only 400 people per year manage to obtain a Section 8 voucher and secure an apartment.

Infrastructure crisis: LA’s infrastructure and public services are in bad shape. Electric grid blackouts have become a regular occurrence in many neighborhoods, along with burst water mains.   Public utilities (LADWP) and private utilities (ATT) are ever-present in the LA’s neighborhoods, trying to maintain old infrastructure systems and expanded user demand. In the meantime, LA has become a mature city, with most of its neighborhoods built in the 1920s and 1950s. Their infrastructure is now wearing out, without preventive maintenance and system upgrades.

In a rational world this crisis would trigger a crash response from City Hall in close cooperation with METRO and the LAUSD. But we don’t live in a rational world, even though we have mechanisms to ensure the careful planning, monitoring, and investment of public infrastructure. These include the City’s capital budget, called the Five-Year Capital Improvement Program (CIP). Unfortunately, the CIP is cobbled together by the City Administrative Officer from wish lists submitted by many City departments.

But the CIP is not connected to the legally-required but ignored planning process. For example, the City Council adopted LA’s Public Services Element in 1969, but it only addressed public monuments.   The Los Angeles of the 1960s bears little resemblance to the same city 50 years later.

The City Council also adopted LA’s Infrastructure Element in 1972. Its focus is refuse disposal.   Needless to say, much has happened in the intervening half-century, and much will transpire in the decades to come. This includes major earthquakes that will render much of LA’s archaic infrastructure inoperable, including, but hardly limited to garbage collection.

Climate crisis: Another drought year is one of many wake-up calls that climate change has arrived.   Other indicators are heat waves, steadily worsening wildfires, and the loss of snowpack in the Sierra mountains. Let’s not forget that coastal storms and sea level rise have also chiseled away at transportation links on California’s ocean bluffs. 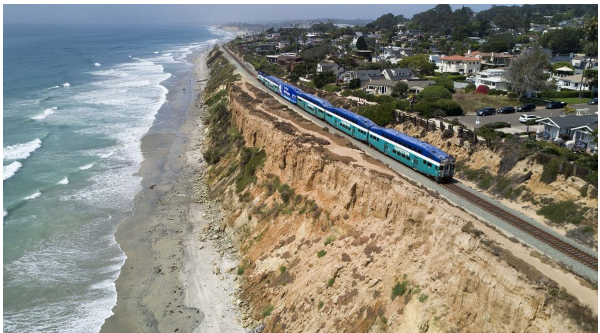 Common sense says that the climate crisis should grab the attention of the City Council and the Mayor’s Office. LA’s previous mayor, Antonio Villaraigosa, prepared a Green LA - Climate Action Plan. You can still find references to it on non-City of LA websites, but this executive document has vanished from the official City of LA website.

In its place are successive versions of pLAn, an executive document that Mayor Eric Garcetti renamed LA’s Green New Deal. This document, too, will disappear when Eric Garcetti is termed out.

Why is City Hall so blasé about the housing, infrastructure, and climate crises?

It is not a lack of available staff. The Department of City Planning has 400 employees, making it the largest municipal planning department in the United States. My explanation comes from Gordon Gekko. If public inaction enhances short term private profit, then “greed is good.” If inaction also results in housing, infrastructure, and climate crises, these outcomes can be swept under the carpet.   Out-of-site means out-of-mind until a City crew can patch up a broken water main or the LAPD can force a homeless encampment out of Echo Park.

In the case of housing, serious profits are generated through the construction and sale of McMansions and market rate mid- and high-rise buildings, especially ones that can bust through the zoning code’s limits on height, size, and density. The consequences of tilting the City’s plans, ordinances, regulations, and code enforcement to promote these highly profitable business ventures directly leads to homelessness. But, for those at the helm, this is a manageable political problem, not a humanitarian crisis solved by public housing and wage increases.

In the case of infrastructure, two analysts have offered thoughtful explanations for why short-term private profitability defeats long-term sustainability. Rebecca Gordon contends that the widespread decay of public infrastructure and public services is the domestic reflection of a declining empire.    The economic and political resources required to maintain 800 foreign military bases and forever wars in Afghanistan, Syria, and Iraq displace critical domestic priorities.

In the case of the climate crisis, there are also many explanations why such business sectors as automobiles and hydrocarbons, prevail over the long-term goal of keeping fossil fuels in the ground.   One noted analyst, University of Oregon environmental sociologist, John Bellamy Foster, maintains that it is impossible to grow our way out of the climate crisis, and that anyone who makes this claim denies the social science explanations of climate change.

To answer the question is “greed is good” working for Los Angeles, the obvious answer is no.

(Dick Platkin is a former Los Angeles city planner who reports on local planning issues for CityWatch.   He serves on the board of United Neighborhoods for Los Angeles (UN4LA) and co-chairs the new Greater Fairfax Residents Association. Previous Planning Watch columns are available at the CityWatchLA archives. Please send questions and corrections to [email protected].) Prepped for CityWatch by Linda Abrams.