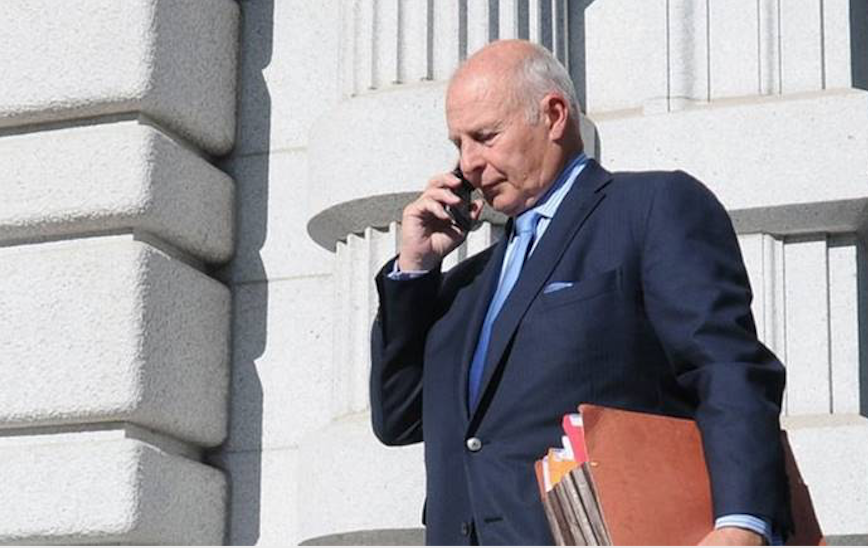 MY TURN-Since power tends to corrupt and courts concentrate enormous power in a very few people, some judicial corruption is inevitable.

One reason for our revolt against King George was his imposition of corrupt judges on the colonies. Corruption in the US Supreme Court in the 1930's was so great that FDR tried to pack the court.  Judicial corporation in California after WW II was sporadic and penny ante.

Although by the 1980's federal judge Pamela Rymer and others were calling up senior partners at the large downtown law firms when significant cases were assigned to them in order to decide how to sabotage plaintiffs’ cases, corruption had not yet moved into the big leagues. By the early 1990’s, however, roguish attorney Harry Weiss lamented that he could no longer buy a judge for the cost of a good dinner since judge buying had become aggrandized by the “West Side Democrats.”  Harry then named names, A thru V especially the V’s, of the new corruption big wigs. He explained one facet of the new system.   Arbitrations provided the forum for systematic corruption.

The 1986 judicial retention elections got rid of Chief Justice Rose Bird, Justice Joseph Grodin and Justice Cruz Reynoso.  The ostensible reason for their removal was that they did not kill enough people, i.e. their opposition to the Death Penalty.  The real motive was set forth in the Chicago Tribune on November 19, 1987; the justices ruled in favor of too many “criminals, welfare recipients, homosexuals, environmentalists or civil plaintiffs.”  “Criminals” was code word for requiring Due Process in criminal trials.  “Welfare recipients” meant “Blacks and Mexicans” without regard to whether they were on welfare. “Environmentalists and civil plaintiffs” referred to Tom Girardi and his fellow plaintiff lawyers who were successfully suing major corporations for maiming and killing Average Joe’s.

The new California Supreme Court, The Lucas Court, went on a rampage destroying consumer protection laws and opening business to vast Corruptionism.  Quite telling was Foley v. Interactive Data Corp. (1988), 47 Cal. 3d 654.  Facts: Executives wanted to hire Robert Kuhne to help them steal corporate funds as was fashionable in the Savings & Loan era, but employee Foley warned the execs that Robert Kuhne was under investigation for embezzlement at Bank of America. When Foley would not shut up, Interactive Data fired him. Later the Feds arrested Kuhne.  The California Supreme Court held that it was OK for Interaction Data to fire Foley for his complaining about their hiring an embezzler.  Two plus two says the Court knew that the execs were hiring Kuhne because he was an embezzler.  The Foley case was the white-collar equivalent of “snitches get stitches” which is a milder form of what happened to San Francisco Attorney Dexter Jacobson – a bullet in the back of his head.

The Supreme Court Justices Had a Stroke of Genius

“We will make a rule that when an arbitrator makes an obviously false decision, the courts cannot change the arbitrator’s decision.  Then, we’ll quit the bench, take our judges’ retirement income and become arbitrators.”  That is basically the story of Moncharsh v. Heily & Blase (1992) 3 Cal.4th 1.  Justice Panelli retired in 1994, Justice Arabian and Chief Justice Malcolm Lucas, who wrote the decision retired in 1996.  All three justices became very high arbitrators whose decisions could not be challenged.  If Willie Sutton had been the California Chief Justice, he no doubt would have ruled “Willie may rob banks” and would have retired from judging to return to bank robbery.  For years, California had quite a number of judges staying on the bench long enough to collect their pension and then jumping to organizations like JAMS to be arbitrators.

The fees which the insurance companies were paying to their defense attorneys and arbitrators were far less than the millions that they owned consumers and the injured.  No wonder Harry Weiss was upset.  As he complained, “I can’t compete with that.”

But Tom Girardi Knew How to Compete

When a case goes to the highest bidder, where’s a plaintiff attorney going to get enough money to sway a judge?  Tom knew where to find the loot.  The insurance companies themselves!  While arbitrators were paid $500 per hour to sabotage a plaintiff’s case, these ex-judges could make even more money by sharing in a mega Girardi win.  Under Moncharsh, an arbitrator could make an award large as he wanted and the court could not lower it.

When we look at how our Constitution is constructed, it is not all that different from Plaintiff lawyers’ paying judges and arbitrators to counter balance the insurance companies’ paying judges and arbitrators.  The only way to balance power is with other power, and by its nature, power corrupts.  Despite efforts to have honest people become congressmen, presidents and judges, we are plagued with rogues, crooks and cowards.  The founding fathers figured that the best they could do was to balance one greedy bunch of politicos against another greedy bunch and in that balancing act hope to avoid a tyranny.

Plaintiff attorney fees alone are seldom high enough to also pay off the judges and arbitrators. As happened with Bernie Madoff, hard times lead to till dipping.  I suspect that like Bernie, a Girardi accounting will show that the first few times that Girardi used clients’ funds, he was able to replace the funds from the next settlements.   Embezzlers can start with good intentions, but it snowballs beyond their control.  But for Erika Jayne’s extravagant ways, it is possible that Tom could have kept ten plates spinning faster and faster at the top of poles for years to come. When one combines the greed of judges, Erika’s avarice, and regular litigation costs, the pie just was not big enough.  No doubt this is when Tom turned to litigation funding agencies who knew about his huge verdicts, but were unaware that he was in the financial dog house.

Claw back is when the authorities claw back ill gotten gain from third parties like arbitrators and judges. No judge wants to have his booty clawed back.  Don’t be so Pollyanna as to think it was only Tom who was supporting the judges. The judicial system has become a crimogenic thuggery and none of the powers-that-be want the attention. What if the Girardi Case launches another #MeTooMovement by court victims?

Initially, Tom was the needed counterweight on the wheel of judicial corruption, but when one lies down with hyenas, one gets up with fleas.   Attorneys with Alzheimer’s are not legally competent to testify in court about who got what, where, when, and how much all of which should suit the judges who have been recipients of his generosiyt just fine.

(Richard Lee Abrams has been a Los Angeles attorney, Realtor and community relations consultant and can be reached at [email protected] Gmail.com. He is a CityWatch contributor.)