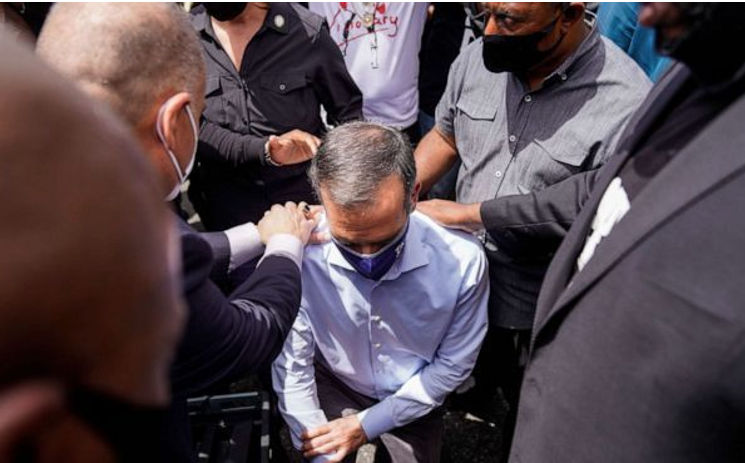 As a result, they can pursue legislation without Republican cooperation, but still need to respect their constituents, especially when they are politically active, such as 2011’s Occupy Movement and last summer’s Black Lives Matter demonstrations. While local officials, like the LAPD brass and Los Angeles Mayor Eric Garcetti, were adept at taking a knee during the George Floyd marches (photo above), their political posturing was short-lived. The People’s Budget lost traction when the mass movement faded away. Its proposal to revamp the LAPD fell by the wayside, even though the Pandemic’s toll on the City’s tax revenue recently forced delays in police officers' raises – without any changes to this enormous agency’s role.

In November’s elections the Democrats gained control of the White House and the Senate, while retaining their majority in the House of Representatives. These events create an ideal situation to determine, as some readers have told me, that the Democrats in Washington, DC are fine liberals, even though their local understudies are in cahoots with big oil, do the bidding of the real estate sector, and are periodically arrested, like LA Councilmember Jose Huizar.

In light of these developments, the open question is whether Democratic Party officials who serve in national offices are cut from the same cloth as their local counterparts? Or do they reinvent themselves when they go to Washington, replacing the pay-to-play culture that pervades local and state politics with good government? Their approach to homelessness and the larger housing crisis can answer this question.

On one hand, a few outlying Democrats, like Vermont Senator Bernie Sanders, have proposed restoring HUD public housing programs to the tune of $2.5 trillion. This is based on the precedent that despite 50 years of bi-partisan housing cutbacks, legacy public housing still shelters 2,000,000 people, four times the number of homeless people in the United States.

On the other hand, the new Biden-Harris administration has turned its back on proposals to restore these HUD’s public housing programs. Instead, the new administration will encourage the deregulation of local zoning laws to spur housing production, no different that the Los Angeles City Council and the California state legislature.  Inspired by Ronald Reagan’s supply-side policies, deregulation is now favored by Democratic majorities at LA’s City Hall, the California State legislature, and in Washington, DC. These notorious “radical socialists” now hold the same views as a president famous for saying: “Unemployment insurance is a pre-paid vacation for freeloaders.”

This case is carefully outlined by Professor David Imbroscio in Shelterforce Magazine. In “Say it Ain’t so Joe/ Biden’s Ill Advised Plan to Eliminate Exclusion Zoning" Professor Imbroscio reports that President Biden’s housing proposals target “exclusionary zoning” because it has been used “to keep people of color and low income families out of certain communities.” Imbroscio then explains why rolling back local zoning laws will not eliminate residential segregation. To do that this country’s worsening economic inequality must be addressed.  In fact, Imbroscio argues that up-zoning makes the housing crisis worse and reinforces racial isolation.

To the extent that racial discrimination in housing remains, programs that can prevent it are totally welcome. But, in 2021, discrimination is a minor factor compared to the deeper structural causes responsible for racial segregation, especially growing poverty. After all, the U.S. Supreme Court banned restrictive racial covenants in 1948. As for redlining to prevent minorities from obtaining mortgages in specific neighborhoods, Congress adopted the Fair Housing Act in 1968 to stop this practice. 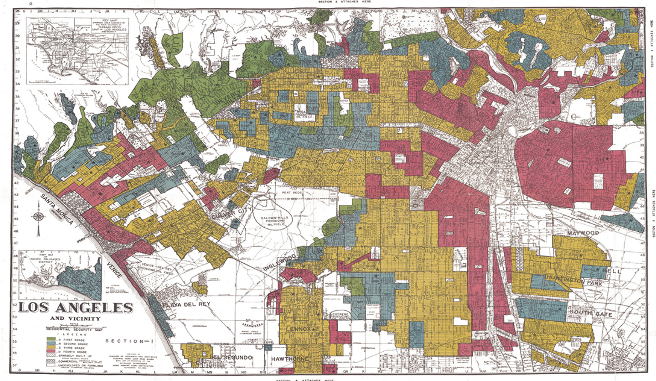 Map of historic redlining in LA, banned by Congress in 1968 through the Fair Housing Act.

Although some analysts argue that several Los Angeles neighborhoods, such as Boyle Heights, still exhibit the long-term effects of red-lining , there is no evidence that up-zoning these communities would reverse this legacy. In fact, the Community Benefits (Up-Zoning) Program that LA City Planning proposes for Boyle Heights would accelerate this neighborhood’s on-going gentrification, leading to the further displacement of its mostly minority residents.

Since the end of racial covenants and redlining, LA’s zoning has remained relatively constant, while many LA neighborhoods experienced major changes in their racial and ethnic composition.

Furthermore, sociologist Michael Bader explained that the best way to promote racial integration at the neighborhood level in Los Angeles is to improve local infrastructure and public services.  When they are upgraded, especially public schools, whites are more likely to move into or remain in changing neighborhoods.

When City Councils, State legislatures, or the Federal government promote up-zoning, it allows a greater range of uses, larger, taller, denser buildings, and reduced parking and open-space requirements. This, in turn, leads to the following adverse consequences:

Politicians committed to an anti-racist agenda should jettison their up-zoning real estate scams. Instead, their anti-racism should focus on repealing mass incarceration laws, ending the trigger-happy gun culture that pervades policing, and reversing environmental and COVID-19 vaccine racism.

There is more than enough anti-racist work to keep the pols busy for years, without wasting their political energy on schemes, like up-zoning, that reinforce the racial patterns they pretend to oppose.

(Dick Platkin is a former Los Angeles city planner who reports on local planning issues for CityWatch.  He serves on the board of United Neighborhoods for Los Angeles (UN4LA) and is co-chair of the new Greater Fairfax Residents Association. Previous Planning Watch columns are available at the CityWatchLA archives. Please send comments and corrections to [email protected].) Prepped for CityWatch by Linda Abrams.