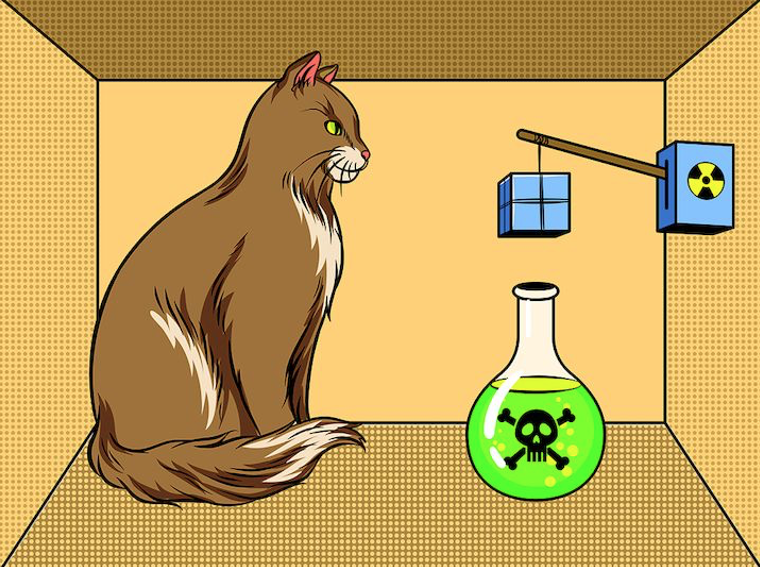 PERSPECTIVE-Schrodinger’s Cat is a thought experiment designed to show people how they misunderstood quantum physics but ended up locking people into that very misunderstanding.

What did Schrodinger's Cat experiment prove?)  People falsely believe that in the thought experiment, the cat’s existence or non-existence depends upon the act of observation when the box was opened.  Until the actual observation, so the misconception goes, the cat was both alive and dead.

The GOP is not locked inside a black box, but like the cat, its continued existence is in doubt. Political parties do self-destruct. Have you seen any Whigs around lately?

Marco Rubio and Ted Cruz have moved to the right of the Proud Boys and some of the QAnon followers in their endeavor to make the GOP party one of fascist thugs based upon lies, intimidation and the destruction of the rule of law.

First, we need to dispel the myth that either Rubio or Cruz are Hispanics.  Hispanics are a faux group created by the Dems for purpose of their Identity Politics.  Both Rubio and Cruz (born in Canada) have Cuban ancestry and historically the have nothing in common with the other groups in the Hispanic category.  Cuban Americans are overwhelmingly Republican and have enjoyed very favorable immigration status.  They were heavily involved in the Bay of Pigs fiasco and in Nixon’s Watergate.  As fervent anti-Communists, they have always sided with the right-wing factions of the GOP and have supported repressive law enforcement measures against all other Hispanics groups.  To an extent Rubio and Cruz have played upon the gross ignorance of other Americans to project the false image of moderate GOP.

Rubio and Cruz are making a play for the fascist element of the GOP after Trump’s implosion.  They need to keep Trumpism alive in the belief that as long as Trump is viable for 2024, they can become true heirs to his followers.

At the same time, the Proud Boys have prominent members who have the integrity to admit that they have been conned.  Trump was no strong leader who was save the nation from the pedophile Deep State.  There was no last-minute re-storming of the Capitol on inauguration day to arrest the Dems, stop Biden from becoming President and restoring Trump to his throne.  On November 8, 2020, the Proud Boys had written,“Hail Emperor Trump.”  After January 20, 2021, they said  “Trump will go down as a total failure.” As Trump fled Washington before the inauguration, they were calling Trump a “shill” and “extraordinarily weak.”  The Proud Boys have no worse condemnation than “weak.”

Nor are the Proud Boys looking for more deceivers.  About Joe Biden, they wrote,  “At least the incoming administration is honest about their intentions,” the group wrote.

Other far right, would-be fascists such as Oath Keepers, America First and the Three Percenters are also backing away from Trump. QAnon members likewise are rethinking their passion. "It's done and we were played," wrote one QAnon member.  They had been true believers in “Trust the Plan.” which they now realize was “Be duped by the Big Lie.”  Trump was not “there with them at the Capitol” on January 6th has he had declared as he launched their attempt to violently overthrow the government.  Nor, did Trump have any plan to arrest the Deep State on January 20, but rather he fled Washington as he had the band play Gay theme songs “Gloria “ and “ Y.M.C.A.”  Their hero was a frightened windbag who was so confused that he didn’t even know what his own theme songs meant.

True believers usually have an inexhaustible well of gullibility, but these former Trump supporters are unique.  They have the integrity to admit that they were duped.  As Ron Wright one of the most vociferous QAnan leaders said, "We gave it our all . . . . Now we need to keep our chins up and go back to our lives as best we are able."

With Rubio and Cruz picking up the fascist mantle which Proud Boys, QAnan and other have shed, the Dems need to kill the Filibuster. Rubio and Cruz make clear that the Filibuster must be killed.  That does not mean the Dems will abandon centrist policies to benefit all Americans.  Without the Filibuster, the fascist element of the GOP cannot control the GOP party the way the Trumpists controlled it these last four years.  Biden can still veto far left lunacy.  McConnell’s constraining the Alt Right requires Biden’s constraining the Alt Left.  As the loss of Dems seats in the House shows, the country is not behind the Identity Politics or ersatz-Socialism of Pelosi Dems.

With the Filibuster’s dead, the GOP cannot be the party of obstructionism devoid of sound public policy. The GOP will be free to propose centrist and co-fashion policies which will appeal to the majority of Americans.  When the GOP’s power rests in shunning its fascist right wing, it can appeal to the majority of centrist Republicans.  The fascist element’s threat of primarying moderate candidates is only as strong as a frightened leadership gives it.

Convict and Bar Trump from Office

Another thing which the GOP must do to save itself is overwhelmingly convict and bar Trump from ever holding public office.  I emphasize “overwhelmingly.” As we have seen in these few days, nothing strips fascists of their followers faster than failure.  Both Rubio and Cruz are promoting their own ambitions by keeping the culture of lies and intimidation alive.  After Trump is convicted and barred from office, however, the follow up state criminal prosecutions will establish in great detail Donald Trump’s true character as a mentally ill con man.

Let’s pay attention to what Enrique Tarrio one of the leaders of the Proud Boys actually said On September 20, 2020.  "I denounce white supremacy. I denounce anti-Semitism. I denounce racism. I denounce fascism. I denounce communism and any other -ism that is prejudiced towards people because of their race, religion, culture, tone of skin.”

The values which Proud Boys’ Tarrio rejects are the values which Rubio and Cruz want to resurrect in the GOP party.  Either the GOP kills off this incipient fascism or it will kill the GOP.