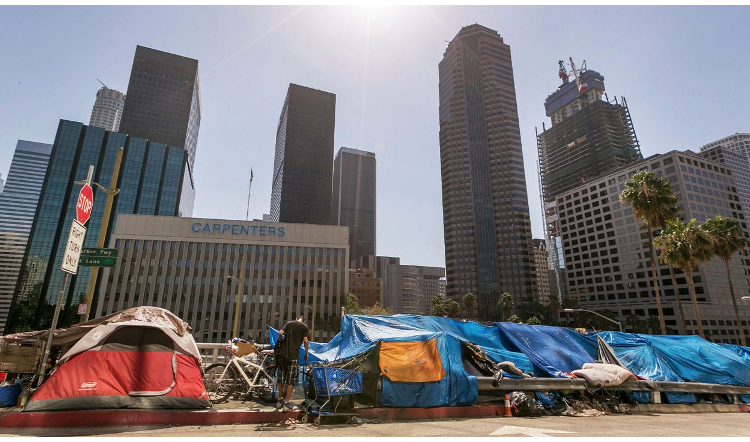 LEANING RIGHT--It's both funny and sad how those of us decrying the hideously awful expenditures of Measures H and HHH are accused of being "the problem" of not caring about the homeless, which occur due to one of two reasons:

1) Those who are apologists for inappropriate expenditures and dreadfully wasteful taxpayers’ funds are clueless about the concept of cost-effective measures to house those who need it the most, and during the pandemic-induced shutdowns. (Sad and childish, but understandable for those who adhere to emotions over logic and reason)

2)Those who are deflecting from inexcusable misappropriation of taxpayer funds voted in by taxpayers operating in good faith with their representatives. (Intolerable and downright sneaky and cruel to both the taxpayers, and especially the homeless)

But very few homeless have been helped by taxpayer homeless relief funds, all while the L.A. City Council focuses on spending money in a pell-mell manner to politically connected interests:

1) Et tu, Nury Martinez? Just because you're a woman doesn't mean that you're to be forgiven for  misrepresenting the needs of City constituents whose City Council is up to their eyeballs in FBI investigations.

2) Speaking of FBI investigations, why do the courts continuously deny illegal developments that slam luxury housing in locations physically and environmentally inappropriate for overdeveloped monstrosities such as the Millennium Hollywood Project?

Those inappropriate developments are both evidence and fodder for the FBI to look into LA city corruption, particularly since that corruption involves taxpayer and City resources that are meant to fix the problem.

The usual suspects, from former L.A. Councilmember Jose Huizar and former L.A. Building and Safety Head Raymond Chan, to so many other councilmembers guilty of doing anything BUT creating affordable and middle-class housing, for both the homeless and those who seek future housing as part of a vibrant City residential growth.

We deserve an accounting, because we the taxpayers are being milked for corrupt City politicians and developers who, at best, are inefficient and inappropriate when it comes to creating a better L.A. for both the homeless and the middle class:

1)Hence the question of $400,000 to $700,000 per unit in affordable housing developments is entirely appropriate to ask.

3) Hence the question of $10.2 million (again, taxpayer funds!) for the renovation of an old motel for unhoused veterans is yet again fair game.

In other words, Measures H and HHH are proof-positive of the inability of the public sector to respectfully and transparently fix critical problems such as homeless and middle-class housing.

The answer is (yes, it's true!) private sector efforts to fix these problems:

1) Faith-based and non-faith-based entities who operate from the heart (such as the too-often-vilified Salvation Army.

2) A cost-effective sale of the myriad hotels and motels shut down because of the pandemic that are the best and most inexpensively performed conversion into long-term small, affordable, and middle-class housing. Let the private sector do the sales, and the conversions, and do so with an eye on profit and RESULTS.

Perhaps the time is NOW to consider (gasp!) voter-led measures for termination of H and HHH, and to instead (gasp!) create tax-free incentives to convert abandoned motels and hotels into both sorely needed homeless and middle-class housing.

Unless, of course, we choose feel-good measures over measures that will (wait for it... ACTUALLY WORK!