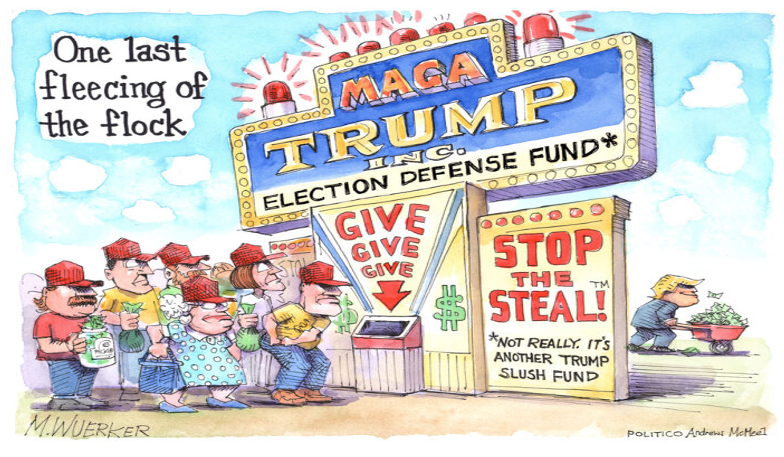 AT LENGTH-A small group of “Recall Newsom” protestors were gathered on 6th Street in San Pedro on the night of the recent stay-at-home order issued by the governor’s office.

Sure, Gov. Gavin Newsom has some apologizing to do because of his French Laundry dinner party during this pandemic. In fact, that’s exactly what he did with a very public mea culpa, yet the critics keep harping on it.

By contrast the White House is hosting something like 25 Christmas parties on their way out the door, which will surely be “unmasked” events. But then Donald Trump isn’t being a hypocrite because he has never issued a stay-at-home order nor advised his base to do anything other than come to his rallies and get infected. The spread of the coronavirus in the red states where Trump pressed his campaign the most reflects his disregard for the seriousness of the disease.

So let’s recall Newsom but protest impeaching Trump, right?  No.  I wonder if anyone has done the contact tracing to reveal whether the infection rates  are due to outdoor dining, attending Trump campaign rallies or ideological opposition to masks?

So it comes as no surprise that when it started looking into the COVID-19 emergency relief spending, Congress found that more than $1 billion in emergency coronavirus relief went to companies that “double dipped,” receiving multiple Paycheck Protection Program loans. This is in violation of the program’s rules, according to a preliminary analysis released recently by the House Select Subcommittee on the Coronavirus Crisis.

According to NBC news, “Congressional investigators identified multiple areas of potential waste and fraud in the program, often referred to as PPP, which was part of the $2 trillion CARES Act. The program offered qualifying small businesses up to $10 million in emergency and forgivable loans to shore up their payrolls and meet basic expenses due to business impacts from the coronavirus and lockdown periods. The program gave loans to nearly 4.9 million small businesses for a total of $521 billion. As designed, the program still has $133 million in untapped funds.”

On Dec. 7, the Justice Department announced that a Northridge man pleaded guilty to fraudulently obtaining $655,000 in PPP loans for his companies by submitting fake tax documents and false employee information.

Steven R. Goldstein, 36, pleaded guilty to a single count, charging him with fraud in connection with major disaster or emergency benefits.

According to his plea agreement, Goldstein knowingly submitted applications for PPP loans to banks that contained false statements about the number of employees and the amount of employee payroll expenses.

And then there is this: California may have paid up to $1 billion in fraudulent unemployment claims filed on behalf of prison and jail inmates in what prosecutors are calling “the most significant fraud on taxpayer funds in California history.”

The state paid more than 35,000 claims under state prisoners’ names, with one inmate collecting nearly $49,000. California also paid more than $421,000 to 133 Death Row inmates — including Scott Peterson, a San Quentin prisoner convicted of killing his wife and unborn child. Some of the claimants used pseudonyms like “Poopy Britches” or “John Doe,” and most targeted federal benefits distributed by the state. What are the authorities going to do when they catch these scammers -- throw them in jail?

This is only more frustrating to the 30 million workers not scamming the system but whose benefits will get cut off the day after Christmas.

Of course, having the leader of our nation basically doing similar scams opens the floodgates for every crook and criminal to grab as much as they can during this Trump-made chaos. No. 45 has continued to rant, “Democrats stole the election” as the post-election grift goes on. But with 51 lawsuits filed, he’s 1 for 51, and has shown no evidence of significant voter fraud. The U.S. Supreme Court refused to stop Pennsylvania from finalizing President-elect Joe Biden’s victory. With the majority of the six swing states now having certified the results, it’s just a matter of days before the Electoral College confirms Joe Biden as president-elect.

As per the latest national polls, something over 80% of registered Republicans are still in deep denial as to who actually won, as are most Republican U.S. senators. These senators are the ones who are blocking any further coronavirus relief for millions of small businesses, workers, cities, and states while the virus resurges across the nation.  While we all should be amazed at the amount of fraud that has occurred, it really shouldn’t come as a surprise since it’s baked into the loose business model of Trumpism. Even his post-election fundraising scam, which to date has brought in more than $170 million, isn’t really going to his legal defense of voter fraud, but to a newly created political action committee for his own personal benefit.

You see, if you cut government regulations, defund departments that oversee spending and reduce the number of government workers, there’s not enough people to keep an eye on where the money goes. Strange how this works, but a really smaller government isn’t more efficient. It’s just a government that’s more easily gamed, grifted and susceptible to graft. Donald Trump is the prime example of this kind of corruption.

And if you haven’t noticed, No. 45 has not apologized. Not even once. That’s something the “Recall Newsom” folks seem to overlook.