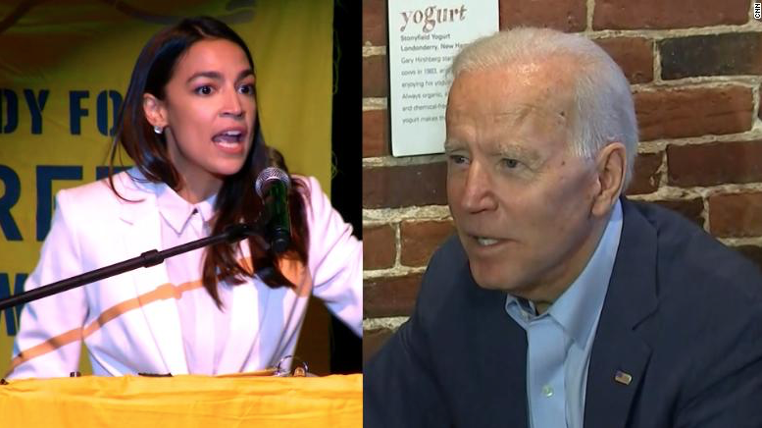 Enter the last two decades, where the concepts of "liberal" and "conservative" have been flipped with respect to free speech, and when a growing number of institutions (academic, media, social, and others) are increasingly kowtowing to appease a rising wave of forces that threaten to "dox", "cancel", or otherwise intimidate those who are guilty only of opposing their opinions.

And those opinions keep changing, and evolving, and finding new sources of disunity that heretofore were not considered disuniting at all. Hence the term "progressive" has replaced the term "liberal", and the term "left" is also being thrown out there.

But the question of what one calls individuals actually DOING the dividing, and CAUSING the rifts in our society, is one that increasingly will torture and agonize the souls of intellectually- and morally-honest old-school liberals who want all political parties to talk and just respectfully disagree.

1) The departure of Donald Trump from, and the arrival of Joe Biden to, the White House would take away the uniting force of the Center-left and the Uber-Left (united in being opposed to Donald Trump) and cause considerable angst among the Uber-Left against the Center-Left history and forces who best represent the past and present leanings of Joe Biden.

2) Meanwhile, conservatives and now even moderates are being called divisive, racist, fascist and violent when--in fact--those guilty of doing the divisiveness (and even the violence) are more commonly coming from the Left...and I mean the Uber-Left. To any moderates who think they'll be free of the Uber-Left's hatred, you might want to reconsider, and reconsider sooner and not later.

Who is the Uber-Left? You know, the ones burning down the cities, trashing urban and even suburban neighborhoods, and treating minorities who stand in the way as cannon fodder to promote their causes. And THEY DON'T STOP--appease them with changes in policies, and very soon a new wave of protests and even riots will occur to address a newly found cause:

1) Most often they are white, most often they despise both white Americans and minority-Americans alike who disagree with them, and most often throw out all sorts of terrible names to those minorities who actually DO want to work with others to create a more United States of America.

3) Most often they will now demonize Joe Biden and even Barack Obama for being too "moderate" (as if being "moderate" is a bad thing!), as we saw in the Democratic primaries (which, fortunately for Democrats such as Joe Biden, had a complete do-over with the COVID-19 pandemic).

4) Most often they will rail with fury at not being heard and not further appeased by moderates of any party, and despite the fact that the "socialist" and "defund the police" caused a significant loss of House seats, and (with an uncertain Georgia pair of Senate races) have NOT to date flipped the Senate as was planned.

And the numbers and the reality of what's good for America (financial prosperity and ideological unity)? They don't care.

2) LA homicides hitting 300 this year for the first time in a decade and with a 25% increase over last year. They don't care.

3) Book banning of legendary American tales that decried the plight of the poor and of ethnic minorities who went through misery, poverty, and bigotry? They don't care.

And the concept of "1984", "Fahrenheit 451", and other foretelling’s of a dystopian future? They don't care, and they didn't read them. And if they did read them, they still don't care.

Because the Uber-Left has convinced themselves that "the other side" are the fascists who burn books, ban books, and censor free speech and an honest debate of the issues.

And now they will turn on Joe Biden if he tries to unite red and blue states to appeal to the majority of those who voted for him, and as well the 73 million who voted for the other guy.

It is difficult to determine how Joe Biden and his advisors will confront the Uber-Left, particularly because the Uber-Left carried him to a record vote in swing states, and in ways not seen at all during the 2016 Clinton/Trump race.

But they are there, and they will not hesitate to demand a pound of flesh (either money, policy, or a threat of further violence) if they don't get their way. Maybe the same can be easily said of the Far-Right (or, if you will, the Uber-Right, for which yours truly and most of us are NOT fans), but it's the Far Left who have been empowered.

Empowered but not appeased, and if appeased the Uber-Left will find something new to be outraged, and which will require further appeasement.

As an American first, I wish Joe Biden the best of luck in threading this difficult needle. But difficult it will certainly be.