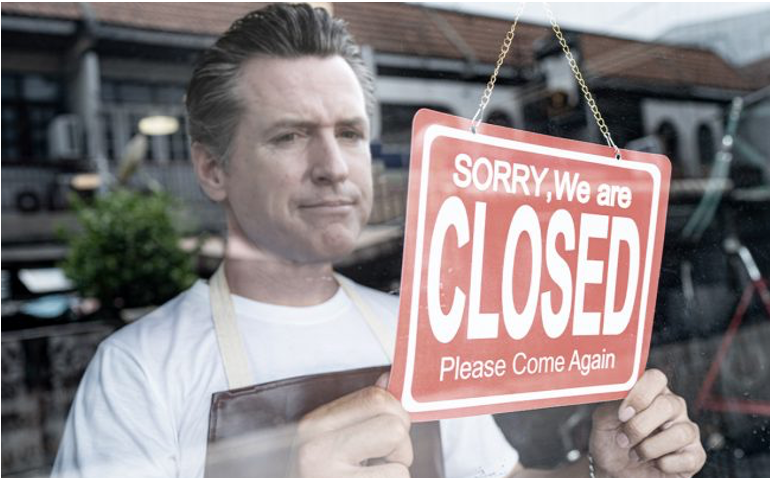 LEANING RIGHT-Many of the controversies, hype and debates (some spot-on, and some way over the top) surrounding the governance of our nation and world--and our state revolves around the handling of the COVID-19 pandemic.

Enter California Governor Gavin Newsom, the biggest hypocrite of them all, and who is arguably emblematic about what makes Californians and Americans throughout the nation really hate so-called "limousine liberals".

Because he mismanages the state, claims to be a great guy, but he’s anything but "one of us". Democrats, Independents, and Republicans alike despise ANY man/woman who thinks he's/she's a higher lifeform than anyone else.

And to any of my pro-Trump friends and neighbors, please consider how many Americans just voted for Joe Biden NOT because they know anything about Biden's ideas for America, but because they were SEETHING at the mannerisms and comments from a President who did not build enough bridges to those who might otherwise have supported him.

Lockdowns for thee, but not for me.

Lemme tell you, Friend Readers, that as a front-line physician and a grassroots activist of longstanding, politicians and "expert" scientists/doctors come in two flavors:

1) The real deal. The straight arrow. No corruption allowed. They know they're no better than any other human being, and want their credibility respected more than anything else.

2) The sleazy, self-serving, media-focused celebrity-wannabes who too often have a conflict of interest in their actions. Too often, they consider themselves higher lifeforms.

They are examples of the former.

And Governor Gavin Newsom is a perfect example of the latter.

Many Americans probably felt that President Trump's first-rate medical treatment was not available for other COVID-19 victims dying throughout the nation, and many also hold that Gavin Newsom has two sets of rules:

1) One set of rules for himself

2) One set of rules for everyone else.

The recent dinner at the upscale French Laundry restaurant this month with topical political operatives earlier this month, attended by Governor Newsom and top lobbyists, including California Medical Association leaders was and is as appalling an example of a similar double standard as any.

Restaurants are being shut down, Halloween was just cancelled, Thanksgiving and Christmas are being cancelled, as California is surpassing 1 million cases of Coronavirus infections.

I may be a Republican, but count me in as one of those who ALWAYS believed in keeping clinics open (and businesses open) with the motto of "put on your mask, and get your butt to work, clinic, the store, and any vital errand needed to get on with your life". So, to any Republican screaming about "masks are a hoax" count Dr. Alpern as being always against that philosophy.

To any Democrat protesting in the street, or to any Republican protesting their loss of civil rights, one should remember that NO ONE was restricted if they wore their masks on vital business and errands (even if masks were always a horrible pain in the butt to deal with). And those folks, Democrats or Republicans alike, all spread the virus unnecessarily.

To those who violated those rules, and to those who get plenty of satisfaction denying others their basic human rights, consider how many businesses and churches and schools playing by the rules were forced to shut down.

And Gavin Newsom was part of that shut down...and even did so to the extent of losing a lawsuit to his overly aggressive and inappropriate use of executive power. An appeals court has granted a stay in that lawsuit, but the message is clear:

1) Gavin Newsom is misusing his executive power, and his attendance at the French Laundry restaurant is a sign of "Dirty Laundry" shows how prone he is to double standards.

3) California politicians jumping on airlines to a Maui conference while airline travel is being locked down are hardly any better.

As the governor and legislature in California continue to oversee an income disparity and abandonment on environmental and economic policies, and oversee a sharp rise in homelessness and overdevelopment that breaks more rules than can be enumerated, the question must be asked:
Why do we keep sending these weenies to Sacramento, when we know they're on the cusp of enacting more destructive legislation, and when we know they're guilty of presuming they're higher lifeforms than the rest of us?

Fortunately, the Newsom recall has new life in its extension to March 17, 2021.

The nation appears to have made history by overcoming a surge of record proportions of President Trump voters to create an even bigger surge to vote against the sitting President.

It's time to let King Gavin Newsom that "the emperor has no clothes".