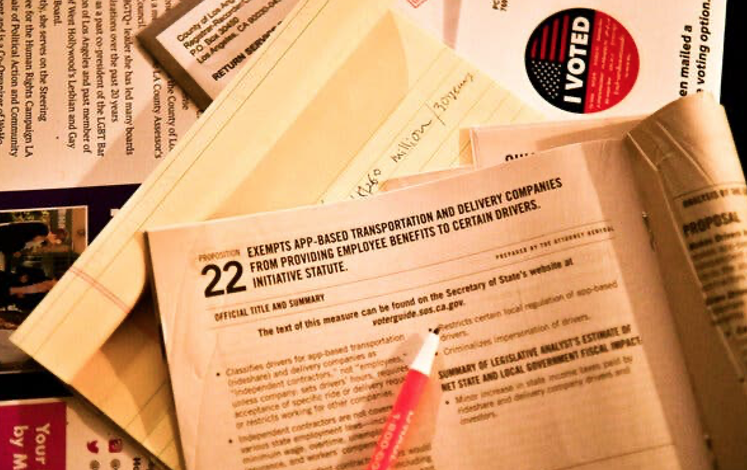 LEANING RIGHT--California, as always, continues to surprise. It also appears to be on a double-barreled approach to being both libertarian yet overly reliant on government.

In short, trying to make sense of this is probably a one-way ticket to an addiction to anti-anxiety medications...so it's probably easier to acknowledge what happened than figure it out:

Law and Order: Screw that! Hello, George Gascón (who transformed San Francisco into a very different city than it was ten years ago), and goodbye Jackie Lacey (the first black female DA in L.A. County).

And Proposition 20, meant to reverse what many in law enforcement thought was an excessive "letting out of prison" of too many felons and repeat offenders, went down to flaming defeat. Will this mean a meteoric rise of gun purchases and private security/police officers? Will our jail population and crime rates stay down? Stay tuned.

A mixed and more debatable conclusion is the passage of Proposition 17--parolees can now vote. That means felons who've not finished their prison sentences, but are deemed safe enough to be out of prison, can vote. But is this just foolishness...or an encouragement of repentant felons who've committed terrible past acts to step up and achieve the joy of law-abiding freedom?

A yet more debatable conclusion is the rejection of Proposition 25, which had both its supporters and critics all over the place with respect to whether bail should be abolished. Bail will NOT be abolished in California...although the need for it to be appropriately applied is critical.

Science: Although hotly debated on what is the "right" approach to science, Californians like it. Stem cell research is critical (think Alzheimers, stroke victims, heart disease patients, etc.), but our past efforts at the public trough have been rife with inappropriate spending, and with very little to show for it.

Taxes: We still don't like them, and the failure of Proposition 15 with the passage of Proposition 19, encourages more business and residential property tax breaks to be kept and maintained.

But for those of you reading this who still think that business and homeowners are just rich fat-cats who have it easy, perhaps you will find some satisfaction (perhaps cruel, and perhaps ignorant, and perhaps just downright mean satisfaction) that businesses and residents have been soaked just fine since the passage of Proposition 13 in 1978...

...because California is pretty good at finding innovative and myriad ways of soaking their constituents.

Racism: Californians apparently don't like it! Proposition 16, which would allow affirmative action to come back, and the ethnic/gender classification of students/business executives to replace a merit-oriented approach to acceptance and ascendance to college and the workplace was rejected.

Fighting like hell to establish Latino and African-American portions in college and the workplace is paramount. Undermining those who've worked their tails off at 80-100 hour/week efforts is probably NOT a way to create a winning society.

Rent Control: Proposition 21 to expand rent control was rejected. Which is NOT, dammitall, to say that Californians don't want more affordable housing. Can we puh-leeze get developers and Sacramento to build a slew of small, affordable, middle-class housing without transforming our neighborhoods and catering on to the 1%.

Unnecessary increased medical costs and regulations: Proposition 22 passed, and Proposition 23 was rejected. We don't need doctors in every dialysis clinic (only on call when needed). We don't need the state to destroy Uber and Lyft. Cost-effectiveness and economic drivers in our state isn't a bad thing. Maybe Sacramento should learn its limits.

Was this a good or bad election cycle? Hard to say. Pushed to the left of left by young voters and a white-hot seething hatred of President Trump. Maybe.

As I get older, I've learned to observe without always having the assurance of understanding. This is one of those times...and reading the tea leaves for the variety of opinions that is the human experience is about as successful a process as is wrestling with water.