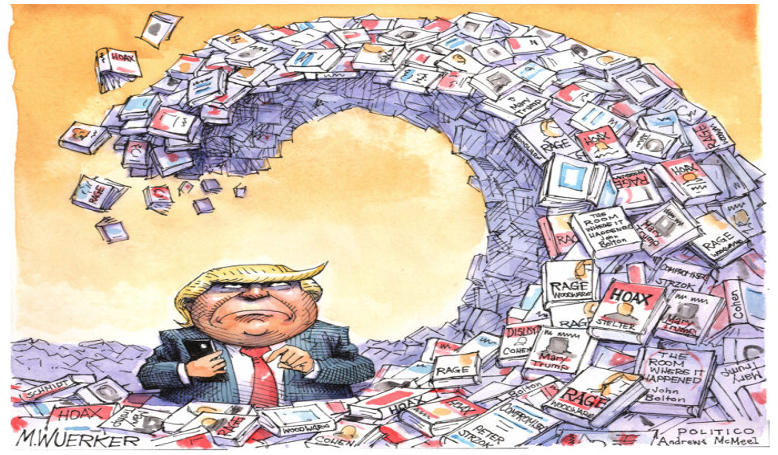 DISINFORMATION ALERT-Sitting, as I do most early mornings, drinking coffee on my back porch, I can hear the distant barking of harbor seals from the main channel.

Recently the weather gal on CBS Channel 2 News forecast that day to be one of the hottest days of the week before reporting on the smoke conditions from the fires. I could hear the bellowing of foghorns from the ships in the port. The weather report didn’t mention the inversion that creates fog, which happens when hot air temperatures meet colder water. It’s a phenomenon that sailors and surfers know well.

Even though each of these ships, large and small, is outfitted with the most advanced GPS and radar, they are still dependent upon the ancient service of the fog horn and probably still a sailor on the bow watch to help navigate the blind gray mists of the waters here. The horns have their own distinctive tones allowing vessels to communicate with and to audio locate other craft in the area through the mist. It is a technology that predates all the sophisticated digital equipment on the bridge of any modern ship and is there in case other systems fail.

Now I only bring this up because the multi-billion-dollar shipping industry still uses this antiquated form of communication as a fail-safe measure. I also use it as a metaphor for what’s missing in the fog of digital communications these days. For all intents and purposes the meteorologists, as the weather gals and guys are called, rely on all of this sophisticated Doppler radar and satellite imaging to forecast tomorrow’s temperatures without knowing the micro climes of temperature inversions along the coasts.

On this particular day, CBS Channel 2 News got the forecast wrong by double digits and then the burnt orange clouds of smoke from the San Gabriel fires lowered the temperatures too. This gave an eerie cast to the shadows on the ground as I walked to work.

All of this is not dissimilar to the fog of disinformation that is blanketing our city and national politics, especially in the remaining weeks before the November election. There’s a bleak perception that grays out all information as being equal and that each of us is left to navigate these treacherous waters by either dead reckoning or digital device alone. Political forecasters are about as accurate as the weather gal on Channel 2 News with best-guess estimates. The polling numbers only add anxiety to smoking distractions of daily scandals and social media conspiracies.

The captain of this ship-of-state, the orange tweeter, celebrates this bleak chaos adding more smoke to create enough confusion to navigate into a second term — lying as he did this week while meeting Gov. Gavin Newsom in Sacramento and denying climate change science. CBS news reported the exchange with an unchallenged equivalency between the science and the idiot denier. The exchange went like this:

“We’ve had temperatures explode this summer. . .We want to work with you to really recognize the changing climate and what it means to our forests and actually work together with that science,” said Wade Crowfoot, California’s secretary for natural resources.

“That science is going to be key because if we ignore that science and sort of put our head in the sand and think it’s all about vegetation management, we’re not going to succeed in protecting Californians.”

“It’ll start getting cooler. You just — you just watch,” the president said.

“I wish science agreed with you,” Crowfoot said.

And the CBS reporter made not one remark exposing Donald Trump’s continued denial of the overwhelming evidence on climate science and global warming.

This comes on the heels of the revelation from the famous journalist Bob Woodward’s report in his new book Rage in which he actually recorded the president as saying he knew the coronavirus was a significant threat early on.

During a Feb. 7 recorded phone call with Woodward, Trump recognized that the virus was dangerous.

“It goes through the air. That’s always tougher than the touch. You don’t have to touch things. Right?” the president asked. “But the air, you just breathe the air and that’s how it’s passed. And so that’s a very tricky one. That’s a very delicate one. It’s also more deadly than even your strenuous flus.”

Woodward also reported that Trump said, “This is deadly stuff.” Then Trump went on to lie about the COVID-19 virus to the entire nation and denying all of the scientific data on the disease and continues not to wear a mask.

It has become apparent that this captain Trump would just as soon scuttle the ship of fools in a fog of deception and outright lies to keep his campaign afloat. And his merry crew of tricksters — Roger Stone, Postmaster Louis DeJoy, Chad Wolf, acting director of Homeland security and Michael Caputo, whom the White House appointed to serve as HHS assistant secretary for public affairs — are all onboard with this plan. They continue spreading false information and deflect all criticism.

That plan, if one can call it a plan, is to support every lie, nutty conspiracy theory and false claim against Democratic candidate Joe Biden and his running mate Sen. Kamala Harris that Mr. Trump can conger up out of his delusional Adderall-addicted paranoia.

So be prepared for the final assault of this disinformation campaign to fog your vision, which creates a smoke screen to hide the truth. And that truth is the fact Mr. Trump is losing this campaign by his own deceit over the COVID-19, racial injustice, and the economic disaster he allowed to manifest because of his own incompetence.

There may be few political foghorns to use as fail-safe options in this, but even the weather gal on Channel 2 should know which way the winds are blowing. Do you?