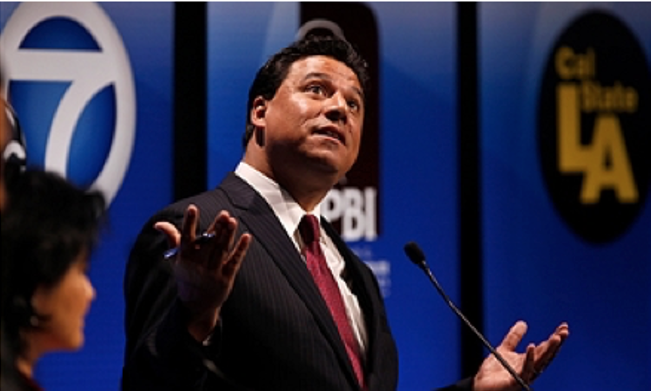 Starting to see the typical Huizar LA City slime machine at work? You betcha. Not to relitigate the Skid Row election to sever itself from Downtown, but it should be noted that the Little Tokyo folks played the role of spoiler in that election. As General Jeff wrote a while ago:

“What is not well known is that Little Tokyo was the deciding factor in that election. Over 1600 people voted in this extremely close election, yet it was decided only by a 60 vote margin – it was the Little Tokyo votes that made the difference. Hundreds of LT voters went to pop-up polls or voted online. If Little Tokyo had supported Skid Row, the outcome of the election would have been completely different. ”

This goes all the way back to the 2012 City Council Redistricting, when Huizar managed to subvert the system and wrapd Downtown LA into CD14, even though the only community of interest was his corruption with real estate developers.

As a result, just imagine how freaked out he was when the Skid Row folks organized to get out from under the Downtown Neighborhood Council, itself a total shill for development.

“Most of us who were around when the Neighborhood Councils were first formed knew how DLANC (the Downtown NC) was set up was to “manage” Skid Row. As early as 2014, the Skid Row NC Formation Committee was created to try and get out of the DLANC, as downtown real estate values soared and the plight of the homeless tanked.”

In retrospect, the real reasons for Jose Huizar putting the fix in with DONE and DLANC make more sense. Downtown offered almost unlimited opportunities to extort money for development, as we now know. But if you want to see the incredible scale of the opportunities, just look at the groovy full color map provided by the Planning Department.

I mean, check out this color-coded interactive map of what is to happen. It’s the developer version of hitting the grand prize at a Las Vegas Casino.

Of course, if you are not a developer, it would be impossible to comprehend the sheer scope of what we now call the: Downtown Los Angeles Community Plan Update (or DTLA 20410).   Check it out.

The Fight and the Prize

Back to the point of this article. You have to remember, had the Skid Row Formation Committee succeeded in breaking away from the Downtown Neighborhood Council, Huizar’s plans for developing and extorting downtown development would have had problems. Public problems.

See, the Skid Row folks have this funny need to actually represent and advocate for the culturally rich and incredibly diverse people who actually live in Skid Row. No wonder Huizar felt the need to crush them, nullify their impact, and move forward with graft on a scale that Los Angeles hasn’t seen since the old “Chinatown” days.

So, he absolutely rigged the breakaway DONE election by the Skid Row Formation Committee to have their very own Neighborhood Council. You can read about some of the slime here.

In the process of fixing the Skid Row NC Election, I think Huizar found an ally in the Little Tokyo folks. They had and have a basic problem, in that there are fewer and fewer Japanese or Japanese Americans living in the area. But in NC elections, that matters not. Stakeholders can vote if they live, work, or have a self-asserted tie to the community. Whatever their ethnicity or actual ties to the community.

Aha! What a trade. So General Jeff is spot on as he describes the role that Little Tokyo played. And what better payoff than a wonderful Little Tokyo Service Center project? I may be speculating, but it all fits.

A review of the Little Tokyo Service Center4 (LTSC) website, reveals that they have basically turned into a City insider preferred “affordable housing” non-profit.

And the Crocker St. project  all started with the Little Tokyo Service Center evidently financing the deal with $8.5 million of public LA City funds.

As the UrbanizeLA blog recently noted:

“Construction of the 414 Crocker Street project is contingent on the approval of several discretionary entitlements by the City of Los Angeles, including a zone change and a general plan amendment.”

Anyone want to bet that the fix is in for the “several discretionary entitlements by the City?”  While last week’s Public Hearing was only regarding a request for “Sustainable Communities Project Exemption from CEQA pursuant to SB 375,” you’d have to be living under a rock to believe that the other pieces of this project aren’t being digested by the Planning machine to predetermine the outcome.

And while I’m at it, what the hell is so time critical about this project? We stakeholders in CD 14 have been without a City Council member since before January 2020. And as of this writing, we still don’t have an elected official at the helm. It would have been nice to have a Councilmember who actually represented us, instead of dodging supboenas and the press.

Why won’t the Planning Commission hold off on everything until we at least have an actual City Councilmember, even if it is Kevin DeLeon as he tries to become Mayor.

Why indeed. What back door deals with Planning Staff and other City Departments are at play here?  Why won’t anyone be open and honest about what’s going on?

It smells enough that I’m gonna stay on this story. Right now, I’m awaiting a response from the Planning Department on my request for a video copy of the August 27 Public Hearing (it was via Zoom).

So let’s watch the Planning Commission like a hawk and see exactly how transparent and how much outreach the City will allow. After all, we can always call the Feds -- I hear they’re around LA City a lot these days.