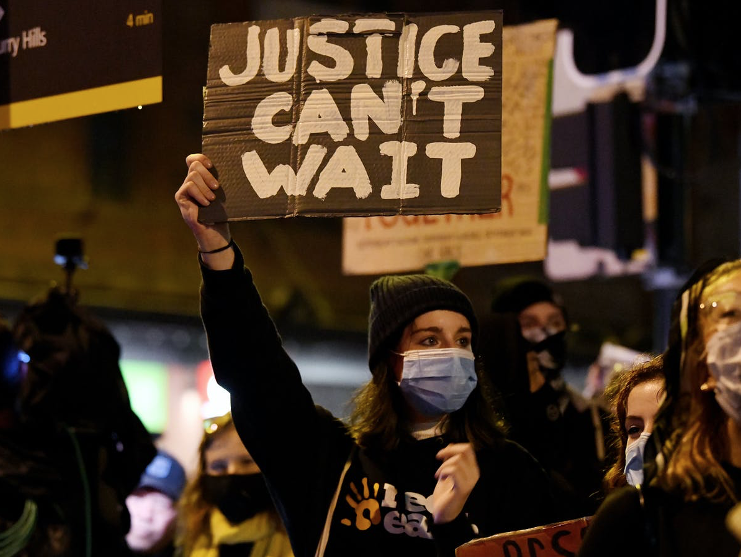 ONE MAN’S OPINION--Black Lives Matter’s message is simple: Do not deny any individual Black person their inalienable rights because of their skin color.

Black Lives Matter people explain that because America is a predatory racist society, individuals with dark skin are denied their inalienable rights including Life, Liberty, and the Pursuit of Happiness.  Each individual’s rights to life and liberty combine to allow them to pursue happiness -- often called the American Dream.

The reality is that America’s society has systematic, predatory racism which routinely deprives Black individuals of their lives and of their liberty, thereby thwarting their pursuit of happiness.

The predatory nature of the wanton murder of Blacks and their unjust incarceration is so obvious that often “predation” is not mentioned.  If our society were not inherently predatory, then anti-Black, anti-Jewish, anti-Immigrant, anti-Armenian, anti-Chinese, racism would not matter.  In a non-predatory society, a cop may encounter a Black person and think, “Oh how inferior,” and then treat the Black person identically to the way he would treat everyone else including his own grandmother.  The abusive and murderous predation makes the racism so evil.  It is the same psychology which resulted in Matthew Shepard’s being crucified on a fence on a cold, wind-swept hilltop in Wyoming.

There Is a More Insidious Aspect to Systemic Racism

When the system itself is predatory, then the people in the system exhibit racism even when they may not be racist.  For example, if one is a prison guard where thousands of Blacks may be innocent or may have been given absurdly harsh prison sentences, the guard has to enforce the racist imprisonment. A Los Angeles County District Attorney who does not railroad Blacks and Mexicans into prison will not find support in the next election. (Things may be changing thanks to BLM.)  Similarly, the major route to get funding to run for a Superior Court judgeship is to be a predatory prosecutor and proclaim your bone fides at locking up the “bad boys.”

Has no one noticed that the TV show Cops, which ran for 32 seasons, was disproportionately chasing down Black men to the theme of “Bad BOYS, Bad BOYS what ya gonna do when they come for you?”  Suppose there were a rap song, “Bad WASP, bad WASP, what ya gonna do when we bad BOYS come for you?”  Donald Trump’s twitter fingers would fall off from overuse.

Black Lives Matter Is Not a Group Rights Numbers Game

Black Lives Matter is 100% Thomas Jefferson’s individual inalienable rights and 100% Martin Luther King’s judge a man by his character and not by the color of his skin.  The Declaration does not have a postscript saying “except for Blacks.”  Rather, Jefferson chose wording which he knew for an absolute fact was the death knell for slavery.  Afterwards, racists like Senator Stephen A. Douglas argued that the Declaration did not apply to Blacks.  Some still hold Douglas’ racist beliefs.

Racist Predation Is Not Only Against Blacks

Although America’s racist predation is not limited to Blacks, at this time in history, the focus has to be on making certain that each individual Black person is guaranteed their inalienable rights. When Black Lives Matter went to the home of L.A. District Attorney Jackie Lacey whose predatory, racist office has been denying Blacks their constitutional rights forever, BLM made clear that Lacey’s dark skin color did not matter.  They focused on injustice and on a District Attorney who had refused to meet with BLM for two years.

The Dem Establishment’s Group Rights Agenda is Incompatible with BLM

The Dem’s Identity Politics has nothing to do with protecting individual Black people.  Even Donald Trump knows this and he is a “fucking moron.”  The Dem had this same approach in the 1960s and 1970s, when President Lyndon Johnson’s Great Society programs were converted into a strict quota system. Individual merit and needs of individual Blacks counted for nothing.  Affirmative Action became the old corrupt ward system of the large urban cities where jobs and other goodies were doled out in return for votes. That was the driving force behind the quota system – to force Blacks to be hired so that they would vote for Democrats.  The claim that the quotas were guidelines was the type lie Trumpy would love  — don’t believe what you see, believe what I tell you.

Nothing has changed with the Dems’ Identity Politics. It is all about gathering together minority groups and promising them goodies as a group if they vote Dem. The Dem’s racist Identity Politics is as immiscible with BLM’s inalienable rights of each Black individual as oil and water.  If the Dem Party were about the inalienable rights of individual Blacks, then DA Lacey’s husband would not have pointed a gun at the forehead of the BLM member who wanted to peacefully speak with his wife.  If Dems cared about individual Black lives as opposed to locking up their votes, there would be no need for BLM in Los Angeles.

Voting for the GOP is likewise a vote for predatory racism. The difference is basically the Dems say, “we love Blacks” and then screw them, while the GOP’s message is “we hate Blacks,” and then screws them. (Intentional hyperbole) That is the nature of Group Rights where individual inalienable rights count for nothing and hence the individual counts for nothing.  They promise their groups everything and deliver as little as possible to everyone.

Yikes, There Is Something New under the Sun

It took years after Colin Kaepernick’s peacefully taking a knee for the rest professional sports to wake up.  The implications of professional athletes of all colors responding to Kaepernick’s call could be the death of the racist Group Rights claims on the Right and on the Left.   No athlete can claim that individual merit does not count.  Finally, even owners are recognizing that Declaration of Independence applies to Black individuals.  They may never live down the disgrace that they collectively earned by boycotting Kaepernick in order to cater to systemic racism, but they can eradicate future racism from their teams and from their advertisers.  All of sudden, the Dem Party’s lure of “come here and will give you goodies based on your skin color” is demeaning.

The Dems have to decide whether they are the party of racist group rights or the party where each Black person is guaranteed their individual inalienable rights and judged by individual merit.

(Richard Lee Abrams is a Los Angeles attorney and a CityWatch contributor. He can be reached at: [email protected]. Abrams views are his own and do not necessarily reflect the views of CityWatch.)