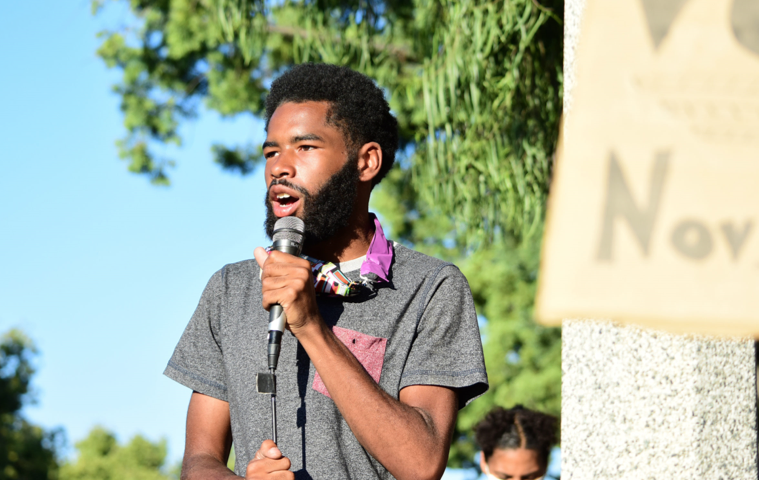 VOICES-South Pasadena is a community that prides itself on its diversity and on its educated and enlightened populace.

London Lang, 21, (photo above) has been conducting an ongoing and somewhat lonely Black Lives Matter protest in this small, predominantly white, liberal town, for going on 55 days. The son of a black police officer, London sought guidance from the South Pasadena Police Department.

In a mutually beneficial cooperation, the SPPD praised London to the local media. London set up his protest a block from the police station on Fair Oaks Avenue and Mission Street and the SPPD encouraged him to contact them if he needed anything. The SPPD assuaged residents’ and businesses’ fears about possible looting. Police cars would pass, with police officers honking and acknowledging the protest, waving, sometimes giving peace signs from their windows.

But even in a community that is as liberal-seeming as South Pasadena, with BLM posters on many lawns, if one scratches below the surface, there’s deeply ingrained racism. On July 8, 2020, the veneer of cooperation fell away.

By this time, I’d been protesting with London’s sister, Fahren James (age 39), who was taking over the protest, hoping to give London a break. Oftentimes it was just Fahren and me as was the case at a little past 6:00 p.m. on July 8. Not once over the days I spent out there did I feel the need to film, but when as a man with a rock and a drumstick sharpened into what looked like a weapon approached and harassed Fahren, I did. He tried to take my phone. I told him not to touch me. Fahren put her body between us. The man then lowered his facemask and spat into my face. The spit also hit Fahren. Then the man fled.

I’ve lived in this community for over twenty-five years. As a white woman, I’ve felt safe and protected in this bubble -- and only when I allied myself with black activists in a visible way did I start to see another side to this city. The officers who came to the scene were indifferent to the fact that a possible hate crime had occurred, and that I’d just been spat on during a pandemic. Was I sure I wanted to file charges? Could I identify the man? (Yes, I told them. I have video proof. I just showed you.) What did he look like? (Would you like to see the video again?) The police wrote down our names and my Driver’s License number and left. After all of this -- ten minutes, maybe fifteen --Fahren noticed that I still had spit on my shirt and in my hair. She took a photograph. She had me change my facemask. We cleaned ourselves with disinfectant.

Two nights later, the man returned and threw a rock at Fahren, calling her a f’ng bitch. Without help from the police, she tracked the guy down (Joe Richcreek, age 56), and he was finally arrested, though not for the spitting assault -- only for throwing a rock at Fahren. He was released soon after.

This morning I watched Alexandria Ocasio-Cortez’s response speech on the house floor to Ted Yoho’s calling her a “f’ing bitch.” Joe Richcreek yelled these same words as he assaulted Fahren James for the second time, throwing a rock at her. “It is a culture of lack of impunity,” Ocasio-Cortez said, “of accepting violence and violent language against women, an entire structure that supports that.”

More virulent racism is so often preceded by inaction -- and fed by passiveness, and cluelessness, which I have witnessed from the SPPD. The arrest of Joe Richcreek was captured on video by London. Corporal Wise, the arresting officer, revealed his ineptitude and bias with his callousness toward the victim, Fahren, and his condescending attitude toward London.

While the report from my case has misstatements, claiming, for instance, that Richcreek spat on my shirt, rather than my face, and that I was offered medical attention (false), Wise’s report from the night Richcreek was arrested makes Fahren -- the victim–seem like the suspect, calling their protest “anti-police,” and complaining about the “chaotic scene fueled by the angry group.” Far more malicious and egregious, Wise contends that he was unable to interview Fahren, because she did not “answer or return my calls for questioning.” Phone records prove no police calls were made.

Between 1985 and 2012, Joe Richcreek was arrested and charged with over 40 felonies or misdemeanors. He has been convicted of no fewer than 20, including four for battery, two each for arson, weapons charges, resisting arrest and trespassing, and once for receiving stolen property, making a criminal threat, making a threatening call, grand theft and driving while intoxicated. He’s also been the defendant in four unlawful detainer (eviction) proceedings.

The fact that Joe Richcreek, a white man (though he’s possibly Latino, he has light skin and appears to be white) is still free to roam around despite having had so many arrests, drives home why we need BLM. Where would Richcreek be if his skin were darker? He clearly has problems, but he’s free to harass people, and the fact that he isn’t suffering consequences for his lifetime of antisocial behavior says a lot about white privilege.

Joe Richcreek came back for the third time the afternoon of July the 19, to the corner of the BLM protest, a pipe lodged under his arm, riding his bike. He threatened a BLM protester, yelling as he rode off, “All lives matter.” The police arrived and had to be briefed by five members of the community on the two prior incidents of hate crimes, never mind that they occurred a block from their police station and City Hall.

In a community that prides itself on diversity, liberal values, and an educated and enlightened populace, what’s become painfully clear to me over the past weeks is that these are the myths of an apathetic, privileged community. The police in this town are not here for its black residents. They are here to protect the predominantly non-black community from those who challenge the status quo or who are deemed suspicious.

South Pasadena used to be a “sundown town.” Up until 1964, black people coming into South Pasadena to work or visit for the day had to leave town before sundown or they could be arrested. Though the law was abolished fifty-five years ago, the town still holds vestiges of hostility toward black people.

London and his sister Fahren have given us a gift -- spending their precious time peacefully bringing a message of justice and equality to the center of our town for over fifty days. And when a racist assailant threatened and assaulted us, the South Pasadena Police revealed that there is still an old attitude prevailing in our local culture that makes this town fall woefully short of its own self-image.

I'm an author who lives in South Pasadena, and I'm concerned that the SPPD are already trying to demonize Fahren and London as uncooperative and more. That is why I am getting the narrative out.