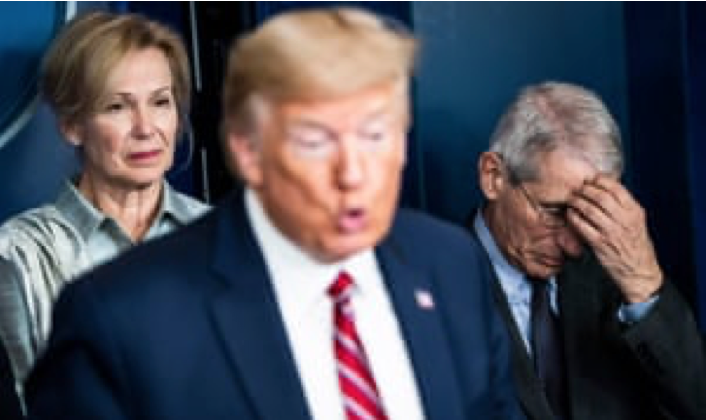 GELFAND’S WORLD--Read it here: Trump says the doctors and the CDC are not being truthful. This all fits in with the following, which was written slightly earlier:

Richard Rose, 37, died 3 days after testing positive for Covid-19, this after frequenting Ohio bars and restaurants and pointedly claiming that the corona virus was “hyped”:

Rose's death has attracted attention online due to his public Facebook posts,  in which he voiced support for President Donald Trump, criticized Black Lives Matter protesters, made jokes about rape, and accused Democrats of spreading false information about the pandemic in order to “rig the elections in their favor.”

He was known for remarking profanely about how he wouldn’t use a mask. When he did catch the Covid-19 virus, he finally agreed that he was very sick and wanted to be rid of the infection. He didn’t survive long.

After his death, he was criticized for being so contemptuous of all the warnings; one of his friends was, in turn, critical of the online critics because Rose was dead, after all.

Still, there are things to be said about what was most likely a needless death. This was a youngish man who most likely could have avoided the illness had he not been so reckless about it.

Richard Rose was not alone. A Texas man is reported to have attended a Covid party – sort of like the idea of a chicken pox party of the 1950s – but frequented by people who wanted to make clear their contempt for all the official warnings we have been receiving from the authorities. In a New York Times story, the deceased was quoted by the medical staff:

“Dr. Appleby said the man had told his nurse that he attended a Covid party. Just before he died, she said the patient told his nurse: “I think I made a mistake. I thought this was a hoax, but it’s not.”

How could any rational human being think of the Covid-19 epidemic as “a hoax” at this point in its development? How deep in denial do you have to be? And think about this – we are talking about relatively young people who could have taken care of themselves and maximized their own safety.

So why do people make mockery of the new plague? What kind of mindset causes people to put their lives on the line for so little gain?

I think the answer is obvious to all of us. One side of the political dividing line has taken the position that the Covid-19 pandemic isn’t really so serious after all. On the other side -- those of us who are appropriately skeptical of everything Donald Trump says and does—there are those of us who recognize the problem for what it is.

For many in this country, following Trump is like being in a cult, with the trappings (the hat), the divorce from reality (calling serious news sources “Fake”), and more recently, the self-destructive behavior (the Covid party). For more than a month, we’ve been watching groups of the unmasked who gather together on street corners to make clear their disdain for the social distancing rules.

So that’s what we got. A more careful president would likely have addressed the issue by pointing out the potential risks and announcing a strategy, while at the same time explaining that the future course of the disease would remain uncertain until we knew more. This isn’t the Trump style. Brazening things out is.

So we got a long line of nonsensical utterances, the silliest probably being that warm weather would make the virus go away. You can see how well that is working out this week.

The other thing that Trump did was to blame the Democrats – that is also what he does. The prosecution of his friend Stone, the Mueller report – you name it, it is a Democratic Party hoax and conspiracy. So in his current state of carelessness, Trump has been telling his followers that things would get better fast, that his administration is doing a great job, and that everything that does not go right is the fault of Chuck Schumer and Nancy Pelosi. Not enough masks? Not my fault. Not enough supplies for testing? Not my fault. The mask? He’s not wearing one until recently, and even then, very little.

And some of his followers take it seriously. They get angry when others tell them to wear masks in public places. They throw parties and mingle closely.

Back in 1981, science fiction authors Larry Niven and Jerry Pournelle published the novel Oath of Fealty, which included the now-much-repeated line, “think of it as evolution in action.”

Later, a staff member at Stanford University with a wry sense of humor referred to deaths of the stupidly reckless as being worthy of a Darwin Award.

The Trump cult is proving to be something of a Darwin Award generator.

Perhaps it’s not even that complicated. A colleague of mine who used to work at a large theme park and who dealt with inattentive parents and reckless behavior all day long summarized it a little more straightforwardly: “People are just stupid.”

But in these cases, it is a special form of mindlessness, based more on social anger and the inability to question the sources you have relied on.

However you want to characterize the sort of behavior that led to these two needless deaths (and so many others, actually), we have Trump’s narcissism and inherent dishonesty to blame for a lot of it. But we still have the question: Why don’t Trump’s followers bring even a little bit of skepticism to what he tells them? Is it so necessary to their mental equilibrium that they buy into the party line 100% and join in massive hatred for the political opposition?

The United States is not doing nearly as well as Europe

The facts supporting the above discussion are easy to find. One of the more definitive summaries is done each day by Kevin Drum in his column. If you scroll through the graphs, you will see that Italy, France, and Germany have brought their daily death tolls down to near-zero. The United States, on the other hand, has been showing a steady increase in the death toll for about the past week, consistent with lots of reckless behavior. A lot of these deaths are now concentrated in the southern states, those with Republican governors who refused to take the epidemic seriously, but instead followed Trump’s party line slavishly.