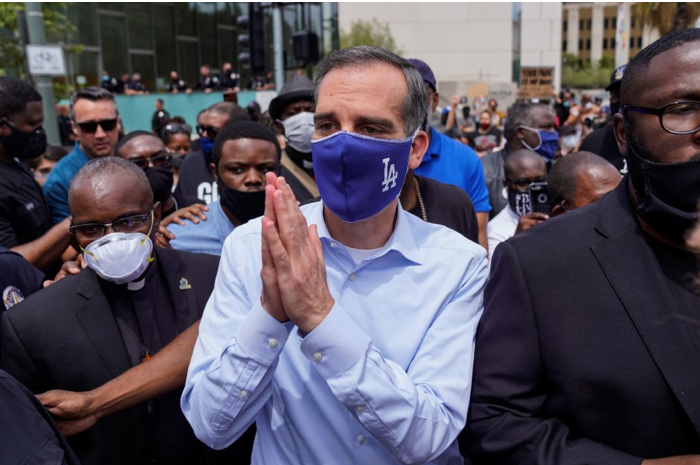 But if you're Eric Garcetti, you have a reputation for NOT following the law, being flippant with zoning and police regulations, allowing unsustainable overdevelopment and unsustainable homelessness, and overseeing a City Hall drenched in graft, it's particularly hard to run a City that's ideally run on the rule of law:

1) City Hall, from the Mayor to the City Council, is so overwhelmed with corruption that it's harder to find an honest City leader than one who isn't--at the very least--ethically conflicted. At the worst, of course, there's Mitch Englander and Jose Huizar who are more reflective of the norm than the exception (and let's not forget Garcetti's own record while running the City Council). Does ANYONE believe that Huizar's colleagues were shocked when he was caught?

And while the City Council is virtue-signaling to show how much they "care" about our fellow citizens' health, finances, and civil rights, it's anyone's guess how many City Councilmembers will have to throw each other under the FBI bus to save themselves from following in the footsteps of Englander and Huizar.

Mayor Garcetti and the Planning Politburo is still under the financial thumb of those who are densifying MORE when the inevitable new viruses and pandemics from all over the world demand we do it LESS.

Not even elegant densification that's cheap, easy, and quick to do? Keeping heights to 4-5 stories along major thoroughfares with apartments and condos affordable for the average Angeleno? Not even on the Mayor's radar screen.

2) How quick was Mayor Garcetti to rip away jobs from hardworking Angelenos in the private sector during the COVID-19 outbreak, and for that matter forcing some of the harder-working City employees with pay cuts, while not leading "crisis teams" to reconnect people with their jobs, or with new jobs?

Or were those jobs only tied up with the pay-to-play contractors who wanted to build "market-level" housing that were anything BUT affordable. We have both winners and losers in the City of the Angels, and the losers are understandably pissed-off with our so-called "leadership" Downtown.

More importantly, did the Mayor have the spine to demand protesters (rightfully furious at the horrible death of George Floyd) socially distance themselves (six feet apart!) to avoid a resurgence of the Coronavirus? Or were you too busy kneeling to show how the LAPD (already a national leader in community policing) are the REAL bad guys in L.A.?

And, whaddaya know? The COVID-19 virus has gone UP in the City of the Angels after the protests no matter how many bars or beaches we close! And the resurgence of the virus is no more acceptable because of stupid bar/beach behavior any more than stupid protesting behavior.

Because one's person's stupid is no better than another person's stupid...and it's the job of the Mayor to both protect the citizens against a rise in the COVID-19 virus as well as a rise in unemployment. As well it's the Mayor's job to both protect the citizens against those who violently rampage in all-out riots to cause physical and economic harm, as well as any rogue, thuggish cops who effectively stop becoming cops when civil rights are violated.

The result of our city, county, and state governments, as exemplified by Mayor Garcetti, who enforced anti-COVID-19 laws against THIS group but not THAT group? Well, it's clear and predictable.

Californians are losing their fear of the COVID-19 virus when they should have always been taking it seriously.

We USED to all take it seriously (my family and I still do), but after the hypocrisy surrounding the protesters marching in mobs and many without masks? Well, many folks have thrown up their hands (perhaps ignorantly so) and just want to go to the beach and live their life again--especially young people who haven't been impacted by the virus...yet.

3) And the homeless crisis, made worse on Mayor Garcetti's watch?

Way to thrash the once iconic Venice neighborhoods, and way to disperse the residents of run-down Downtown Skid Row while telling Angelenos all over the City they really had NO rights to safety and security--particularly from those among the homeless who had NO interest in obeying the law.

Because it's long been known (ask the police you're throwing under the bus, Mayor Garcetti!) that these sorts of calls are among the scariest and most dangerous of them all...and when a few shot and/or killed social workers are the result of this silliness, perhaps you'll realize that the men in blue really ARE our bravest protectors.

But most of all, being a successful Mayor requires credibility.

And since it's obvious we've got none of that in the Mayor's Mansion right now, maybe we can pray the City doesn't completely fall apart before 2022, so we can do better next time.

(CityWatch Columnist, Kenneth S. Alpern, M.D, is a dermatologist who has served in clinics in Los Angeles, Orange, and Riverside Counties, and is a proud husband and father to two cherished children and a wonderful wife. He was termed out of the Mar Vista Community Council (MVCC) twice after two stints as a Board member for 8-9 years and is also a Westside Village Zone Director. He previously co-chaired its Outreach Committee, and currently is Co-Chair of its MVCC Transportation/Infrastructure Committee and Vice-Chair of its Planning Committee. He was co-chair of the CD11 Transportation Advisory Committee and chaired the nonprofit Transit Coalition and can be reached at Ken.Alpern@MarVista.org. He also co-chairs the grassroots Friends of the Green Line at www.fogl.us. The views expressed in this article are solely those of Dr. Alpern.)