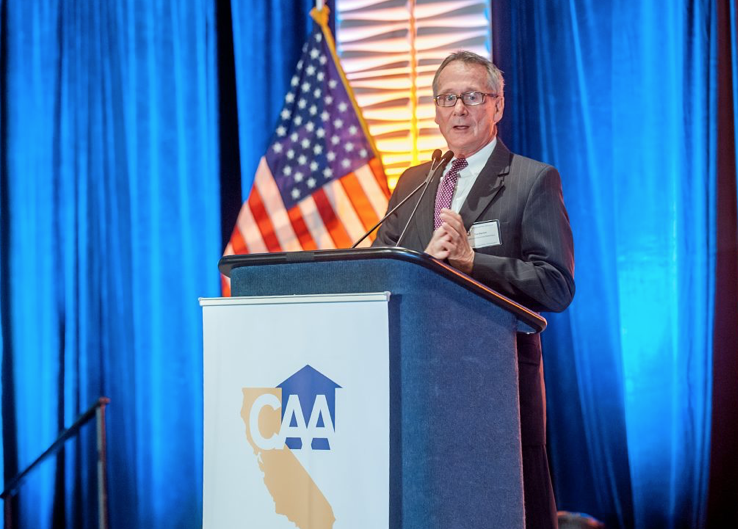 DIRTY TRICKS--The California Apartment Association is up to its dirty tricks again — and has stooped to a new low.

Known for shelling out mounds of campaign cash to influence politicians and using bully tactics against housing justice organizations to stop renter protections, the landlord lobbying group has now set its sights on AIDS Healthcare Foundation — trying to silence AHF’s housing advocacy work for vulnerable renters and the homeless.

The California Apartment Association, led by CEO Tom Bannon (picture above) and CAA Board of Directors President Barry Altshuler (an executive at the corporate landlord firm Equity Residential), is leading the charge to pass AB 1938. The state bill would stop AHF from using certain monies to carry out its housing advocacy work through litigation and ballot measures. Around the world, activists and experts agree that access to stable, affordable housing is essential for maintaining good health, especially for people living with chronic diseases such as HIV/AIDS.

The CAA and Big Real Estate have routinely used deception to defeat housing justice organizations — and kill nearly any kind of legislation that strengthens renter protections during California’s housing affordability and homelessness crises. For the CAA and the real estate industry, anything that even slightly threatens out-sized profit margins must be stopped — no matter the consequences to middle- and working-class Californians.

In 2019, the California Apartment Association killed watered-down tenant protections that were initially passed by the El Cerrito City Council. The CAA started up a petition drive to repeal the protections through a local ballot measure. According to housing activist Karina Ioffee, CAA’s signature gatherers misleadingly told residents that they should sign the petition if they wanted rent control — a complete lie. Other signature gatherers said that if residents didn’t want criminals to move into El Cerrito, they should sign.

El Cerrito residents weren’t experienced in the dishonest ways of the California Apartment Association. The lobbying powerhouse got the signatures it needed, forcing the City Council’s hand. The politicians folded, and repealed their own watered-down protections in August 2019.

“It was another example of CAA’s power,” Ioffee said.

A year earlier, in 2018, the California Apartment Association tried a similar campaign in Mountain View, where the landlord lobbying group tried to repeal renter protections through a ballot measure. The CAA and others brazenly framed it as a good thing for tenants, but the disingenuous effort failed to get enough signatures. Mayor Lenny Siegel said in a strongly worded statement: “Mountain View voters were not fooled by the apartment owners’ deceptive campaign to place the sneaky repeal on the ballot.”

In 2018, the California Apartment Association sponsored a political committee to oppose Proposition 10, the California ballot measure that would have repealed statewide restrictions on rent control. That committee, funded by such corporate landlords as Equity Residential, Essex Property Trust, and AvalonBay Communities, raised $53 million to trick voters with deceitful campaign ads. Despite the fact that more 525 housing and social injustice organizations, civic groups, and elected leaders endorsed Prop 10, voters were sufficiently scared and confused — and the initiative, which was largely funded by AIDS Healthcare Foundation, lost at the polls.

These are just some of the underhanded tactics the California Apartment Association has used over the years. Recently, during the coronavirus pandemic, the CAA tried to repeal a temporary rent freeze in Santa Ana.

“I call on you to continue standing up for working-class and immigrant residents in the city that have been economically impacted,” Santa Ana resident Carlos Perea told city politicians. “I understand landlords who shamelessly want to continue to raise rents during this global crisis have been putting pressure on you. That is not just disappointing but morally wrong.”

Fortunately, the Santa Ana City Council listened — and maintained the freeze. But many activists believed that CAA’s hard push in Santa Ana was another disturbing example of its strong-arm, extremist ways: even during a global pandemic, the CAA was still trying to scrap a temporary measure that kept people in their homes and safe.

Now, through AB 1938, the California Apartment Association is trying to stop AIDS Healthcare Foundation’s crucial work to protect vulnerable Californians, including seniors, families, teachers, the unhoused, and people living with chronic diseases. It comes at a curious time.

AHF and its housing advocacy division, Housing Is A Human Right, are spearheading the grassroots effort to pass the Rental Affordability Act, a November ballot measure that expands rent control in California. U.S. Senator Bernie Sanders, labor and civil rights icon Dolores Huerta, and Congresswoman Maxine Waters, among others, have endorsed the initiative. Who’s behind the political committee that wants to stop it? The California Apartment Association, with funding from many of the same corporate landlords who opposed Prop 10. It’s hard-ball politics at its worst.

At a time when AHF is fighting to keep Californians in their homes and safe during the pandemic, the California State Assembly Health Committee passed AB 1938 last week. It’s now heading to the Assembly Appropriations Committee.

Will state politicians continue to empower Big Real Estate and kill AHF’s invaluable housing advocacy work? Or will they stand up for what’s right, tell the California Apartment Association and the real estate industry that they’re out of control, and stop AB 1938 in its tracks? California housing activists are watching closely. The bill is not just an attack on AHF, but also the entire housing justice movement.