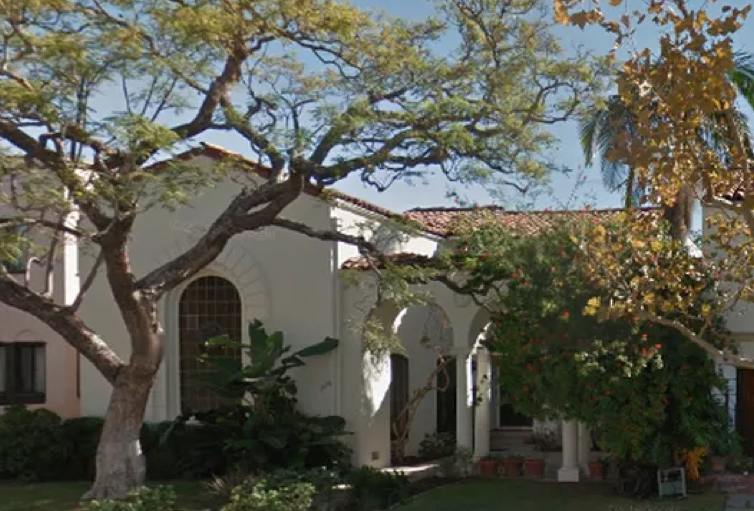 VOICES-When I heard that my wife’s book club was meeting in the home that the architect, S. Charles Lee designed for himself (photo above), I decided to read a book I didn’t want to read.

On Hayworth in Carthay Square we were ushered into a two-story living room that might feel like a church to some due to the large leaded glass picture window with stained glass insert at its center. Others might focus on the historic wrought iron light sconces, the iron tie rods that hold the cathedral ceiling in place or the staircase with wrought iron balustrade that winds its way down into the room from the second floor.

While our club began to discuss the book, my mind wandered. I imagined a starlet like Loretta Young to come swirling down the staircase and into the room just to tell us that she had only read the first four chapters, but that was okay because she had worn her gown just for the occasion.

Lee lived in the Carthay Square Neighborhood from 1927 to 1929. When the market crashed the young architect was forced to move on, move on he did. Only two years later in 1931 he designed the Los Angeles Theater, one of the great moving picture palaces to be located in downtown Los Angeles. It was the center piece of a burgeoning film industry. He would go on to design the Fox Wilshire Theater in Beverly Hills, (now known as the Saban Theater,) The Tower Theater on Broadway, the Bruin in Westwood, and 400 movie houses on the Pacific Coast and in Mexico. In Carthay Square, between 1924 and 1929, Lee designed 16 duplexes in the 1000 block of Hayworth Avenue, notable more for the type of living space they defined then for their unique style. From the point of view of style, they are stucco-clad in the Spanish Eclectic mode often with mission tile on the roof and wood in-swinging casement windows.

Before the coronavirus quarantine made our book club’s live meetings an historic memory, once our discussion was finished, we would usually break for a snack and small talk. This is when I learned that S. Charles Lee incorporated a dumb waiter into the design of his house. I can only assume that his interest in mechanical devices led him to incorporate this luxurious amenity. After all, he saw himself as a modernist, even designing a movie theater in Visalia in the form of a Quonset hut, (1949) and the Star Theater in La Puente (Quonset hut with dome).

There are other design elements on this house, however, that do not correspond to the term “modern.” For example, the stained glass insert in the front window depicts three knights on horseback carrying lances into battle. There are also medallions on the façade bearing the fleur-de-lis, a symbol of French royalty. Simeon Charles Levi was one of the few Jewish architects of his era. After serving in the navy during WWI, he trained in 1918 in Chicago where he studied architecture in the style of the Ecole des Beaux Arts. Showing his love for mechanical contrivances, the young Lee had built two cars as a hobby and in the 1950s would write an article on tilt-up concrete walls in architecture.

The current owner has had the foresight to apply for a special designation of her home within the Carthay Square HPOZ. In November of 2016, the city declared this house to be an historic monument. As we left the book group that evening, my final thoughts were that we are fortunate to live in an architecturally rich community with roots that run so deep in the development of California.

(Peter Merlin is a long-term resident of Carthay Square in LA. He currently serves on the HPOZ Board for the three Carthays. He was formerly an LA architect and a docent at LACMA.) Prepped for CityWatch by Linda Abrams.