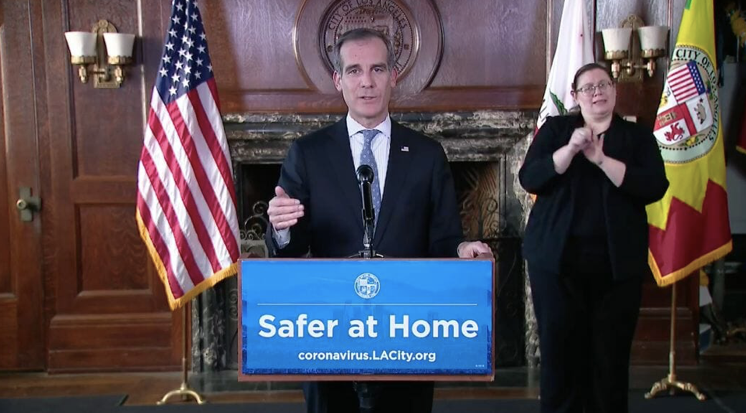 ALPERN AT LARGE--As stated in my last CityWatch piece, we did NOT start this crisis.

But it is our solemn and sacred duty to finish and resolve it, and to win this new, deadly, and largely avoidable war that was unfairly imposed upon us.

As a physician, I want the truth, and with the understanding that reality is VERY complicated, and that works great for one patient (Plaquenil, Remdesvir, Xeljanz, Jakafi) may not do a doggone thing for another, and that life is one big bell curve.

Hence it is to be noted that the biggest winners politically include Governors Newsom and Cuomo who are working with the right people and are coming off as more sincere than many of us ever thought; others are merely virtue-signaling, be it from the left or the right.

We need to let science and public health policy win the day, and we need to figure out innovative ways to reopen the economy. And that's damned complicated, whether or not anyone (including many writers and readers at CityWatch) want to oversimplify things:

1) Health and Human Services Secretary Alex Azar has won high marks focusing on fighting pharmaceutical companies for cheaper generic prices, but has been sidelined for not being prepared for the pandemic Rightful accusation/demotion, or just a fall guy?

2) Trump and Fauci disagree about a resurgence of the Coronavirus this fall, and while I personally side entirely with Fauci over Trump it's also been noted that Trump is a "right to try" and "maybe things will change" person and is NOT firing Fauci, and makes many policies based on Fauci's recommendations (which also have evolved).

And I've never heard Fauci, Trump, Newsom, or Cuomo EVER talk about not taking action for both the economy and public health, and/or to find a middle ground. So saying that any one of these folks' messages are "simple" is not hearing or grasping what they're saying.

3) Trump actually disagrees with the Georgia governor's plans to reopen the state for business (it's a matter of when and how, not if), and governors of ALL states are grappling with how and when to reopen various portions of the economy (particularly if proper health practices and greater testing are being used).

It's interesting to hear both Democratic and Republican leaders talk, because when one actually hears what they say in the right context, they are very similar. However, the "open everything up" and the "let's kill the economy to save the planet" folks probably exist in their own strange realities, and are arguably part of the problem, not the answer.

4) As a physician (dermatologist) who sees many patients, and who does many procedures, in the clinic to keep people out of the hospital, and who wears masks and demands the patients wear masks, and if need be wear gloves, and get their temperature taken, it's a relief that Arizona governor Ducey is opening up elective procedures in the health care venue.

Without any hesitation, it is my ardent belief that we're harming people's health unnecessarily by keeping so many patients away from the doctor, and arguably we're putting their lives at risk. We can practice safe medicine without cruelly separating patients from their health care, and virtually forcing them into unsafe waiting rooms and risking their lives when that is just NOT a good practice.

So...it's complicated. Very complicated. But to those of us who know about the Scientific Method, and how science often reveals more observations than explanations, and/or that one size doesn't normally fit all, that "complicated" concept is no big revelation at all.

But there are also basic truisms that cannot be ignored:

1) Mass transit is a great idea in urban centers, but suggesting that the automobile is the vehicle of the Antichrist isn't a good one. Cars are needed more than ever, and NO person who considers himself/herself a transportation advocate should dismiss either mass transit or automobiles.

2) Staggering work days throughout the clock, if not virtually a 24-hour cycle, allows both for social distancing and decreased traffic.

3) The Chinese government is the one ultimate culprit, and not any Democratic or Republican leader in the United States, for our ongoing crisis.

And no one more than the Chinese people will suffer more. If you want to turn the guns inward at fellow Americans as we should be circling the wagons, then that is your right...but please be aware that you're doing exactly what the Chinese government wants.

4) Neither Garcetti, the City Council, or Planning should be allowing ANY permits for developments needing variances, and/or are very large and normally subject for Neighborhood Council review, to be passed.

While Garcetti and the City Council virtue-signals, they're still approving megadensity projects that are anything BUT harmful for any current or future social distancing. And they're also continuing to promote that single-family homeowners are racist, selfish, and environmentally-horrible people.

It's to be argued that many of the perpetual YIMBY's are either in their own cult (TOOLS), believe they'll get something for nothing (FOOLS), and/or are getting PAID to continue to promote inappropriate and over-development that is anything BUT environmentally- or health-friendly (GHOULS). This something (Tools/Fools/Ghouls) that can't be repeated enough.

But if anyone's learning curve is NOT going up during this historic, once-in-a-century pandemic, then that is their right.

And it is our right to call them out on that.

So if Eric Garcetti, Herb Wesson, Mike Bonin, Paul Koretz, or anyone on the City Council or in the Department of Planning want to continue to allow permits to be PASSED without proper legal muster or challenge, then it is our right (if not our responsibility) to call them out on that.

But you do NOT have the right to allow the COVID-19 virus to kill democracy in our city.

And you goddamn well know that.