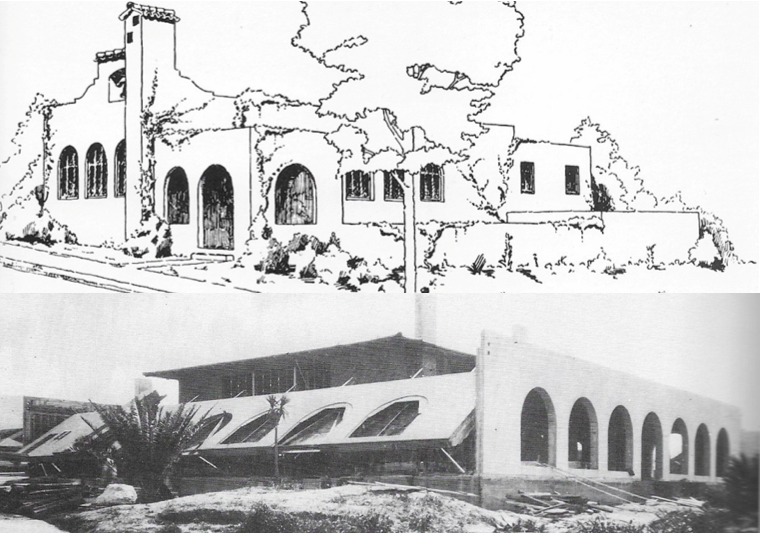 VOICES-Last month my wife and I walked through Carthay Circle, a neighborhood sandwiched between Fairfax and Beverly Hills between Wilshire on the north and Olympic on the south.

We were flanneurs, tourists from Carthay Square to the south, on a pilgrimage to our elder sister community, hoping to spot a house designed by Irving Gill.

Gill’s architecture could be distinguished by its simplicity, a reduction to “the straight line, the arch, the cube and the circle.” A typical Gill house would have exterior walls clean of ornament, stuccoed in the style of the Spanish missions, austere and ordered, with the correctness of a Quaker in Ninevah. On Del Valle, about a block from Tom Bergin’s tavern, we saw a small house with thick walls and an arch over the entry.

The owner of the house waves to us from the driveway. He recalls when he first came to live in Carthay, how he moved into an ADU behind the main structure owned at that time by a friend of his. He told his friend that someday he would own the house. Today, in the midst of the coronavirus quarantine, he and his wife are hunkered down on their property. Keeping the required six feet of separation, he walks us around the outside of his 1966 square foot bungalow, one of six such houses that Gill designed in Carthay Circle, three on Del Valle, two on Warner Ave. and one on Schumacher.

Gill had showed up in 1922 at the offices of Horatio Warren Bishop, the supervising architect for the Carthay Center development, looking for work. Bishop described Gill as a strange looking man: He wore his black hair long down to the shoulders, dressed in a tan colored smock with leather leggings, (puttees,) and black shoes. He was an artiste in the style of Frank Lloyd Wright who Gill had trained with in the offices of Louis Sullivan in Chicago. Gill at the time was down on his luck. His Concrete Building and Investment Company had gone broke due to his unusual tilt-wall method of construction. Using tilt-up equipment purchased from the U.S. government, which had used it for construction of army barracks in the Philippines during the Spanish American War, Gill had purposed the equipment to build structures in San Diego and La Jolla like the La Jolla Women’s Club (1913). But with the onset of WWI, construction had taken a downturn and the equipment was unused. In addition to the post war lull in development there was little interest in a style of architecture whose simplicity and honesty was designed to be “within reach of beauty lovers of moderate means.”

Bishop, who was shown other projects by Gill, gave him the green light to use his tilt-up method in Carthay Circle. The walls were formed in concrete on a tilted table with built-in frames in steel for doors and windows. When the walls were raised into place with a small motor they were fully formed. I had always thought that it was Rudolph Schindler who had perfected concrete tilt-up in his Kings Road house of 1922. Schindler was more experimental and modernist than Irving Gill and his houses would not have been a good fit for the eclectic and picturesque neighborhood of Carthay Circle.

Gill himself was something of an outlier for the conservative developer and he soon left Bishop’s office. Gill’s stated goal was to make architecture within reach of beauty lovers of moderate means. He did this by using concrete tilt slab design as well as by promoting, (on other projects,) polished and colored concrete floors that have left a lasting legacy on our history of design.

As we walked home from Carthay Circle, we felt more aware of how lucky we are to have examples of architects like Irving Gill, Paul Williams, and S. Charles Lee in our respective HPOZ’s. Maybe when the pandemic is over, we can arrange to have a tour of these jewels in our midst.

(Peter Merlin is a long-term resident of Carthay Square in LA. He currently serves on the HPOZ Board for the three Carthays. He was formerly an LA architect and a docent at LACMA.) Prepped for CityWatch by Linda Abrams.