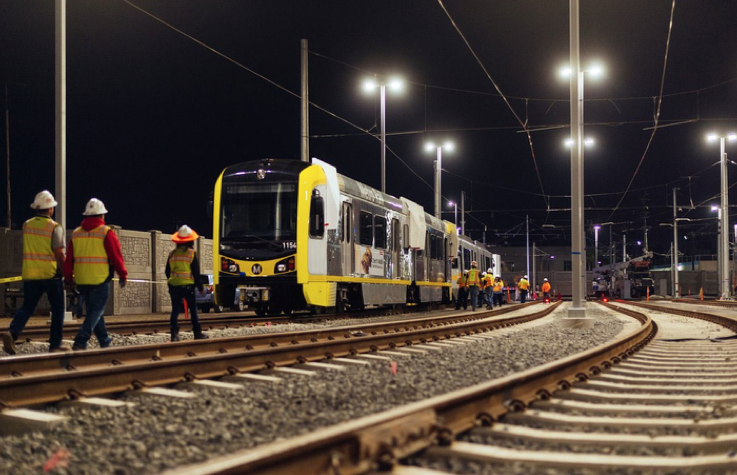 ALPERN AT LARGE-If you read the title and expected either a pro-transit or anti-transit screed, you will probably be disappointed.

Mass transit, as with freeway/road transportation, is vital in any traffic-plagued urban environment. Similarly, construction is as important an economic cornerstone as any.

Hence, the insistence of Governor Newsom to continue construction projects during the Coronavirus pandemic is probably well-received and good news for both his supporters and doubters.

And that includes major projects like the Crenshaw/LAX Line (see below) and the Orange County 405 Freeway project, which are going full-steam ahead...as they should. I won't muddy the water with the CA High-Speed Rail Project, because that's more politically radioactive, but that, too, is planned to be delayed not one iota.

Because life WILL go on beyond the pandemic. It absolutely MUST go on.

But our economy won't reopen with a bang.

And if anyone wants to be either a Democratic or Republican partisan, that's their business, but the nation (and much of the world) was focused on a historic impeachment in January while the world believed the story promulgated by the Chinese government and the World Health Organization that this Coronavirus was just another flu virus.

There are Republican and Democratic mayors and governors alike who were slow to shut down their economies, so (again!) one can be partisan but that one will likely be intellectually and factually dishonest.

A better, and more needed question to be answered is how to restore our economy, if at least in waves. As a physician watching both the headlines and the journal articles, it is my prediction that a Coronavirus vaccine might take 12-18 months to develop, but an experimental and limited vaccine will be developed no later than this fall.

Who will get it? Who will be the lucky beneficiaries-slash-guinea pigs to get it? Might some of us not need it if we already were exposed to and got over it?

My guess is that young people and low-risk individuals will be of a very different mindset than older or high-risk individuals, and that certain venues will open before others. Some of us will want that experimental vaccine, and others might not, and yet others might be delighted to learn they got exposed to the Coronavirus and are immune.

And now to the Crenshaw/LAX Light Rail Project, which but a few months ago was of great concern to many Angelenos, and particularly to those reading this.

The Crenshaw/LAX Light Rail Project, which is essentially a north-south light rail line connecting the Expo and Green Lines, and which runs about a mile east of LAX, broke ground in early 2014 and was supposed to open in the fall of 2019. As of last week, the opening has been extended to 2020-2021 because of construction problems.

I admit to being disappointed at any major time and financial overruns on any major project, but that seems to be the norm more than when these projects run on time. Walsh Shea, which is building the Crenshaw/LAX Line, is a pretty good contractor, and Metro CEO Phil Washington is on target when he says that rushing the line is a greater safety issue than doing it right the first time.

And for those who don't know, this Crenshaw/LAX Line is laden with enough above- and below-ground portions of the line to make it anything but "easy-peasy" to build, Considering the line really reaches its full potential when it connects someday to the Wilshire Subway, this recent delay means NOTHING in the greater picture of Metro Rail's history.

Furthermore, with the LAX People Mover meant to connect the Crenshaw/LAX Line to the airport predicted to be finished and start running in 2023, it's to again be concluded that "better be safe than sorry" is the right way to go for what is, despite the name, not so much a LAX connection but a north-south light rail line that is a counterpart to the east-west Exposition Light Rail Line.

But there is the BIGGEST issue of all not to worry about a potential handover of the Crenshaw/LAX line delayed from the fall of 2019 to the winter of 2020-21.

This is NOT an attack on Metro, although I have concerns about its current policies and leadership leading to an overall reduction in transit usage long before the Coronavirus pandemic (I doubt I am the only one with these concerns).

But with the freeways also empty in ways we've not seen for decades, and Metro's buses and rail lines already with low ridership, this is the perfect time to get our infrastructure--including the Crenshaw/LAX Line, which is a great project overall--in order.

The Coronavirus is getting New York transit workers sick because of past failures to plan for (and respond to) the virus and even our supermarkets require masks for entry.

But freeways, rail lines, and our economy requires VISION. So if any of you remember Sam Kinison's famous screaming query to Rodney Dangerfield in the movie "Back to School", we need our mayors, governors, and president to all figure out--at least in portions, our economy can be restored.

How about our online economy first? Working with the hotel/service industry to keep people employed at least part-time to deliver food?

And as I've stated before in previous articles, the politician who proclaims and encourages these new, sustainable businesses while promoting planning and transportation policies to keep our roads relatively clear of traffic, will have a glorious future...as will his/her adherents.

Because the delay in the Crenshaw/LAX Light Rail Line opening is probably the least of our worries, right now.