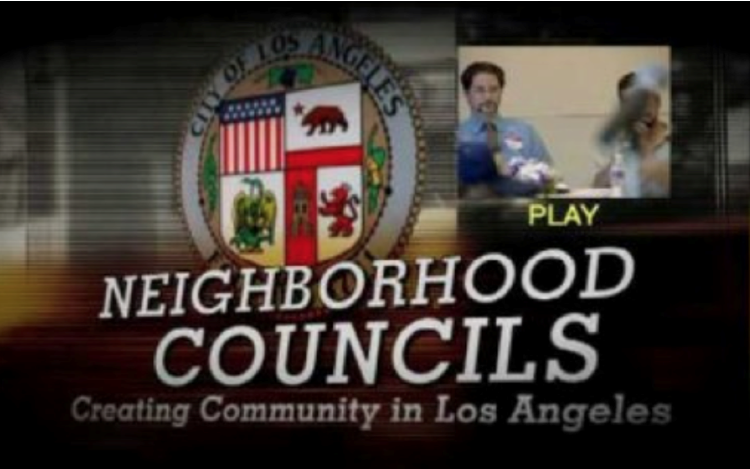 EASTSIDER-When Charter Reform was passed in 2000 establishing the Neighborhood Council System, everything worked well for the first few years. Under a hands-off Mayor James Hahn. You can read about these heady days here.

That ended big time with Antonio Villaraigosa as Mayor. A fatal flaw was built into the system: the fact that the Mayor appoints all Department Heads, Boards and Commissions in the City, another change that came with the same Charter Reform that brought us the Neighborhood Council System.

Using his new powers, Villaraigosa got rid of the independent Greg Nelson, and then appointed a series of replacements until he found his perfect foil: Grayce Liu. She was more than willing to do whatever the Mayor wanted and turned DONE into a public relations ra rah club for the Mayor. Just read some of the General Manager’s email messages.

Sadly, for the NC System, Eric Garcetti was more of same. They both exploited the fact that the Mayor exerts total control over the NC system. Not the Council. The Mayor appoints the General Manager of DONE, and that person really doesn’t report to anyone else.  Even though the City Council Committee can ask questions, or make a few changes to the NC Rules, they can’t hire, fire, or discipline the DONE General Manager.

In Lincoln Heights, failure to post Committee agendas to DONE’s (ENS) System could result in “Exhaustive Efforts.” In Historic Highland Park, failure to post or even provide agenda packets and minutes is given a total pass.

In other Neighborhood Councils, like Central San Pedro, my CityWatch colleague Bob Gelfand has described a witch hunt to put them into “Exhaustive Efforts” based on a mere allegation, later actually reversed by the LA City Attorney:

“On Feb 12, the deputy City Attorney sent the following message. I have removed only the proper names:

Wow! What the heck is up? Even by DONE’s recent low standards, these actions all suck.

Does DONE or BONC Have a Clue?

I’m not making this up. Further, when DONE finally provided their letter to the Lincoln Heights Neighborhood Council, it turned out that the letter was not signed by Mario Hernandez. Dated October 3, 2019 and signed by DONE’s Mike Fong, the NC was informed that they were in violation of BONC’s 2014-01.1 policy on posting and would have to undergo mandatory training and compliance before the end of October:

“Failure to comply with this requirement may result in the Lincoln Heights Neighborhood Council being placed into Exhaustive Efforts.”

In Highland Park, stakeholders have been bitterly complaining that the Board doesn’t post complete agenda packets, and further doesn’t have timely minutes adopted and posted to the website. DONE says and does nothing. Just check out their website.

And all this in the face of a specific BONC Resolution regarding Minutes Posting Requirements (BONC Policy 2016-01), which states:

If BONC and DONE can’t evenly enforce their own rules, why should they get a pass on their internal failings? They shouldn’t.

The Crazy Relationship Between BONC and DONE

Part of the problem is that BONC doesn’t supervise DONE, and outside of a few defined areas, has little jurisdiction to do so. The best explanation I found is in a 2007 letter from the City Attorney to the Neighborhood Council Review Commission.

There are major differences in BONC’s authority vs. DONE’s in regulating Neighborhood Councils:

“In the case of BONC, the Charter's framers created a definitively hybrid commission. So much so, that its features do not combine to cast it as predominately one type of commission versus   another. Like a managing commission, BONC has the authority to approve contracts and leases as well as to set binding policy with respect to the system of neighborhood councils.

However, BONC lacks the hallmark and distinguishing feature of a managing commission: the authority to direct the general manager in the carrying out of department affairs. Accordingly, with respect to departmental operations, BONC may only play an advisory role.”

And DONE itself is basically an unregulated department, subject to the Mayors ability to hire and fire the department head at will:

“Pursuant to Charter§  904, the Plan, and Regulations,  the General Manager is responsible for administering the  neighborhood council certification and  de-certification   process, assisting neighborhood councils with elections, boundary adjustment petition  reviews, bylaw adjustments, resolution of neighborhood council complaints, training, education and outreach, and administering  the  Neighborhood Council Funding Program, the Financial Accountability and Technical  Assistance Policy,  and the early  notification system. A general list of duties that are DONE's responsibility are also described in Article VII of the Plan. See also, LAAC §22.801, which echoes many of these duties.”

All these quotes come from a 7-page City Attorney letter to the Neighborhood Council Review Commission dated August 17, 2007. I dare you to find it on DONEs miserable excuse for a website. It took me a long time, and I could find no contradictory City Attorney Opinion. Just in case, here’s the link.

What a deliberate mess. Truth is, reading between the lines, the City Attorney’s Office is who gets to define all the relationships between these entities, as they are simultaneously the attorney for BONC, DONE and the Neighborhood Council Boards. This is a total rats’ nest of conflicts of interest, subject to whatever interpretation any deputy City Attorney decides to make up on the fly. Last I checked, there are a few hundred City Attorneys.

Here’s the real takeaway. The Riordan Charter Reform that created the Neighborhood Council System back in 2000 contained a fatal flaw. The flaw is simple and must have been intentional. The Mayor appoints all the BONC members, and the Mayor appoints the General Manager. Period. No other meaningful oversight.

The current Neighborhood Council System is a Rube Goldberg machine, destined to fail. In most areas, BONC has no authority over DONE, and any member of the DONE staff can run around and do whatever they want with a Neighborhood Council. Witness the diametrically opposite positions they have taken with Lincoln Heights and Historic Highland Park. Not to mention the ugly mess in San Pedro.

Most of this was marginally covered up and held together under Grayce Liu, until she got her payoff of a cush job from Mayor Garcetti. Now there is no institutional knowledge. Especially since Liu destroyed the historical documents of the Neighborhood Councils, which used to be available on their website.

Now there is a new department head, Raquel Beltran, who comes from a policy background, but has no real day to day experience with the Neighborhood Council system itself. So she has to rely on staff, or the City Attorney of The Day, or god help us, BONC, to figure out how all this works.

The only folks according to the 2007 City Attorney’s letter who can change any of this, is the Los Angeles City Council.

“As noted above, BONC's policy making role is established in the Charter, which states that BONG, among other things, "shall be responsible for policy setting and policy oversight.  However, the Charter also provides that the City Council is the legislative branch of the City and, except where the Charter specifically provides otherwise, the Council has "the full power to pass ordinances upon any subject of municipal concern."

“The Council may adopt ordinances concerning neighborhood councils consistent with requirements for the Plan set forth in Section 904 at any time, which ordinances shall supersede any inconsistence Regulations that have become effective pursuant to Section 905.”

How far the Council can go in modifying the rules of the road for Neighborhood Councils is basically untested. So, before anyone gets all giddy, remember what happened the last time the Neighborhood Councils went to David Ryu’s Committee. I wrote about this in a piece called “Attention Chairman Ryu: DONE is Broken and Something Must be Done.”

At the end of the day, not much came out of the exercise. Still, the City Council does have authority to provide a check and balance for both BONC and DONE. Maybe, just maybe, as Council elections are coming up, they will be willing to look at this hot mess.

Otherwise, the question is whether the Neighborhood Council System can survive until Eric Garcetti is replaced in 2022?