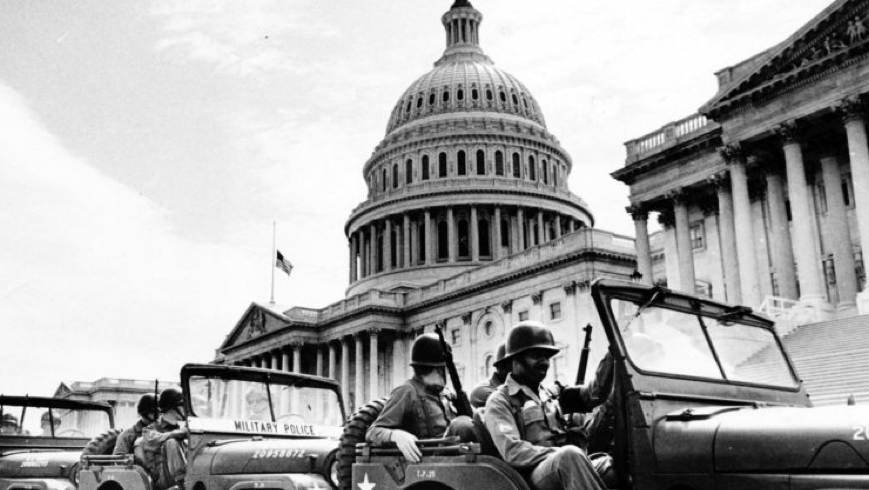 AT LENGTH-The era that we have come to know as the 60s actually started much earlier — 1955 to be exact.

It began with simple act of defiance by a woman of color refusing to give up her seat on a segregated bus in Montgomery, Alabama. Rosa Parks would eventually become a national symbol for the civil rights movement and Rev. Martin Luther King, Jr. would become a Nobel Prize recipient before he was  assassinated and martyred just as he began to speak out against the war in Vietnam and fight for economic justice for the working class.

In November 1963, I was just a month shy of turning 13 when President John F. Kennedy was assassinated in Dallas.  It was a devastating shock to this nation. I’m not sure we have ever quite recovered from nor come to a full understanding of its significance. Yet, from that time through all of the riots, demonstrations and subsequent murders of political leaders that followed, it formed a national consciousness that remains to this day. It even influences those who were not yet born then. The end of the Vietnam War, the Watergate scandal and the impeachment of a sitting president — Richard M. Nixon — punctuated this era of the 1960s. The echoes of that impeachment is what’s resonating in the current congressional proceedings.

Recently, I was invited to lecture to a class at Los Angeles Harbor College to a class of students recently. Most of the students weren’t even born in the past century. I was asked to frame the history of the 60s in something other than a textbook version, something more personal. It could have been a lecture on the influence of rock ‘n’ roll, The Beatles, The Rolling Stones and The Who, but this was a history class.

So I started telling them about high school in 1964. . .about how some of my friends and I started the first “off campus” newspaper, which had to be published anonymously because it was not sanctioned by the school administration. In those days, student free speech was not protected and we all would have been expelled from school if we had been caught.

I recounted how one clever teacher, Mr. Wooten, figured out the identity of the main culprit behind the unsanctioned newspaper and convinced the school counselor to put me in his honors social studies class. It was an honor my grades at that time didn’t support. I was the kind of student he wanted in his class who would ask questions that others would not. Looking back, much of what I read and discussed in that one class has informed me ever since.

It was during this same time that my father paid for me to take a trip to the United Nations in New York and Washington D.C., ostensibly to see how government worked. At the U.N. we saw the famous painting of Guernica by Pablo Picasso and the huge room of the general assembly. And then, it was off to the nation’s capital.

We arrived on April 3, 1968 and our chaperones had planned for us mostly white suburban kids to have an “interracial” dance party with some of the inner-city kids from the District of Columbia. Just as the music started to kick up, the party was stopped by the news of Dr. Martin Luther King Jr.’s assassination that day (April 4) in Memphis, Tenn. The women began to cry, the men shook their heads and the teenagers all stopped and held their breath. It’s the saddest dance party that I’ve ever attended.

The outrage in the neighborhoods surrounding the National Mall exploded that evening and our adult handlers evacuated us back to our hotel rooms with orders “not to leave.” By nightfall, the grief and the outrage escalated into riots and fires. The National Guard was called in to occupy the Mall and protect the national monuments. I didn’t sleep much that night. By the next morning, we were still under orders not to go outside, but in my usual sense of curiosity I snuck out anyway, onto the National Mall. There, to my amazement, were rows of concertina wire and machine guns guarding the Supreme Court and the steps to the U.S. Congress.

The smell of tear gas and smoke lingered in the air. There was a pregnant silence like a battlefield after the shooting stops and I thought to myself, “If my father wanted me to see how government actually worked, he really got his money’s worth!” This was history in the making and I took pictures with my square Kodak camera and never forgot this.

Back in Los Angeles, on June 6 of the same year, on the night of the California Democratic primary Robert Kennedy, the leading contender for nomination to run against Richard Nixon, was assassinated at the Ambassador Hotel. Again, the nation was in mourning and the question of where this nation would have gone if he, his brother, John, and Dr. King had lived still haunts us like a giant question mark.

My question to these mostly young people the other day (if not to ourselves generally) is whether our history is just circling back on us with issues unresolved from before? Racism and seemingly endless foreign wars and now a corrupt president who, very much like Nixon before him, is willing to flaunt the U.S. Constitution in order to maintain power.

My answer is that it is up to each generation to protect the liberties enshrined in our Constitution and the Bill of Rights. For even as technology has changed, human behavior has barely evolved. The ghosts of our past are very much with us today, even as they place a statue of Rosa Parks near the Montgomery, Ala. bus stop this week, where she was once arrested.

(James Preston Allen is the founding publisher of Random Lengths News where this was first posted. He has been involved in the Los Angeles Harbor Area community for more than 40 years.) Prepped for CityWatch by Linda Abrams.